Launching a kart racer on a system with arguably the world's best is a risky game. Yet Beach Buggy Racing, a Mario Kart-inspired racer from Vector Unit, manages to avoid most negative comparisons. It's a competent racing game with a surprising amount of content from a studio that knows its way around a race track. Sure, its mobile roots hamstring the experience somewhat and it never manages to transcend the genre's pitfalls, but overall this is a fun little racer that punches above its weight class.

Beach Buggy Racing is your typical kart racer. Several cartoon speedsters will race for gold across a number of colorful tracks, deploying wacky power-ups along the way. While the game doesn't introduce anything new or different, it finds a way to meet the requirements of the genre, both good and bad. 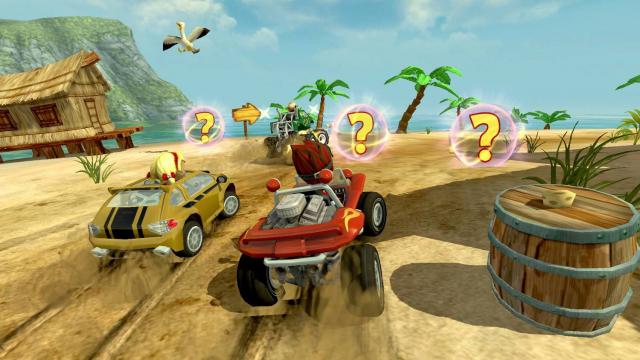 One of the game's best features is its track design. Most courses have a seaside or resort town backdrop, but others include frozen tundra and even a habitat on an alien world. They're entertaining to look at and even more fun to drive around, thanks to smartly placed jumps, hairpin turns, secret short-cuts, and hazards. When the intelligently-designed tracks meet the game's 25 power-ups, things get even more exciting.

The collection of offensive and defensive power-ups in Beach Buggy Racing is among the best the genre has to offer. There are traditional items like nitro boosts and homing missiles and weird additions like a ball-and-chain players can attach to opposing drivers, slowing them down. There are also ricocheting rubber dodge balls and a remote control that reverses steering controls for rivals. The latter is especially useful against AI drivers. There's nothing quite so satisfying as deploying it on a sharp turn and watching the computer-controlled karts veer in unison into the abyss. 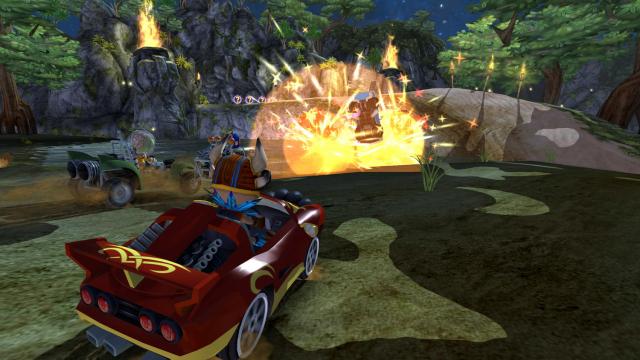 While the track designs are clever and fun, there simply aren't enough of them. Beach Buggy Racing has only 15 tracks, so players will keep seeing the same locales again and again throughout their racing careers. The same holds true for the title's soundtrack. The tunes are bouncy, but there aren't a lot of them. It gets stale after a while.

Another complaint stems from Beach Buggy Racing's simple and loose steering mechanics. Here the game's mobile origins hold it back, as steering feels as if it was modified from gyro controls. There's nothing at all game-breaking about it, in the end, but it doesn't feel as snappy and responsive as other kart racers. 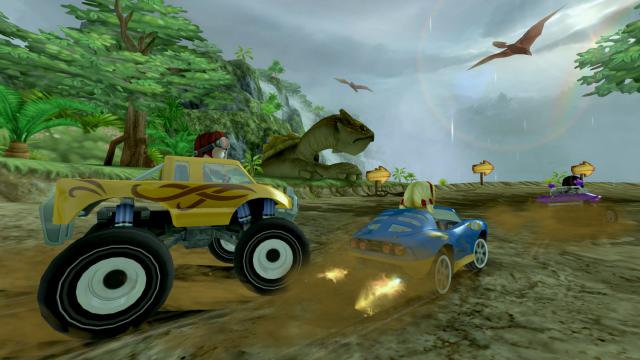 Lackluster presentation is another negative holdover from Beach Buggy Racing's roots on mobile devices. While tracks are lovely to behold, clunky character models and spartan menus betray the game's original venue. At the same time, vehicles show off a fair amount of detail and personality.

Players willing to deal with some loose steering and a few unseemly menus will find a wealth of content in Beach Buggy Racing. The game boasts a single player career mode with dozens of events and unlockable bosses, daily challenges, a championship cup for each of the game's nine cars, plus options for quick race and local multiplayer for up to four drivers. As players win events, they'll earn money which can be reinvested into car upgrades, necessary to come out victorious against the game's nefarious rubber-band AI — a vice of the kart racer since time immemorial. 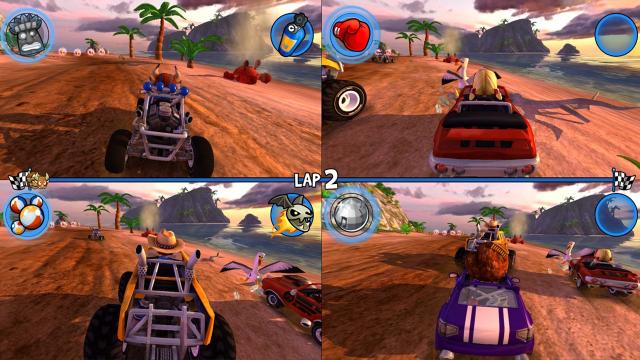 It would be easy to take a quick look at Beach Buggy Racing and write it off as shovelware. It's not. It's a surprisingly fun kart racer with lots of single player content and local multiplayer options for four friends. Tighter steering, more tracks, and an extra layer of polish would make it even better.

This review is based on a digital copy of Beach Buggy Racing for the NS, provided by the publisher.

Local multiplayer only? No online I mean? I fairly big feature to not mention in a review about a game in this genre. Unless I've missed it.

That's where MK8 pisses all over this so realistically