Developer Inti Creates has been remarkably supportive of Switch. In just six months, it has brought to Nintendo's hybrid Blaster Master Zero — one of the system's finest games — Mighty Gunvolt Burst, and, now, Azure Striker Gunvolt: Striker Pack. A collection of the two Azure Striker games previously released on 3DS, Striker Pack includes all available DLC and boasts a few Switch-exclusive upgrades. It's a meaty compilation, for sure, but the games involved have a few imperfections.

Both Azure Striker games take place in the near future where adepts — people with elemental, supernatural powers — live among the rest of the population. A corporation called the Sumeragi Group keeps the peace, but in reality collects and controls adepts for its own nefarious purposes. Gunvolt, a member of the anti-Sumeragi group QUILL, fights back against the evil corporation. Along the way, he's joined by several friends and enemies, including a human named Copen who wishes all adepts dead. 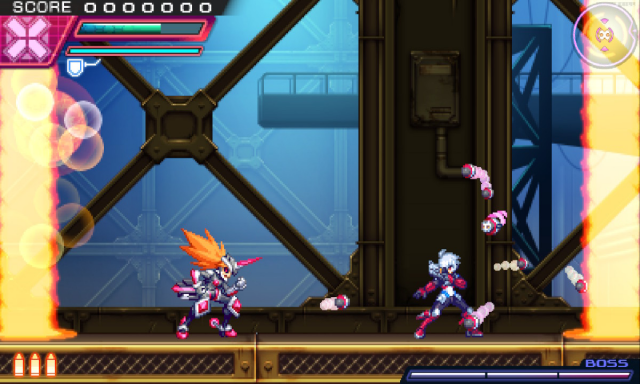 The stories across both games are your typical video game fare. They include scheming, shadowy bad guys; cackling bosses; and an unflinching hero. Elevating the boilerplate narrative are some amazingly-detailed and vibrant graphics. The models and animations are outstanding, and the lightning effects beautiful and dramatic. It all looks especially good on Switch, which supports 60 frames per second, well above the original games' 30 FPS.

Although the Azure Striker games come from the same studio that created Mega Man Zero and ZX, they play very differently thanks to a unique tag-and-flashfield mechanic. When Gunvolt shoots an enemy, he does little damage. Instead, he needs to "tag" the bad guy with a bullet and then fry it with his flashfield, a field of electrical energy. The flashfield deteriorates upon use, but players can boost it manually by double tapping down on the d-pad. 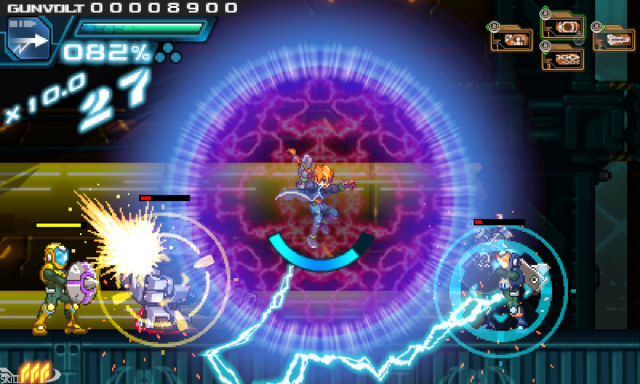 It's an interesting and different gameplay hook. It has a number of offensive and defensive capabilities, and works for Azure Striker's kudos system. Essentially a score multiplier system, kudos is the heart of the series. Depending on how and when Gunvolt destroys opponents, his kudos will increase. If he gets struck by enemy fire too often before reaching a checkpoint, his kudos count will drop to zero.

Kudos, and high scores in general, are such a big part of the framework of Azure Striker Gunvolt and its sequel that a single playthrough is insufficient to mine all that the games have to offer. Only by replaying levels, finding hidden gems, and, in the case of Azure Striker Gunvolt 2, playing through the campaign as both Gunvolt and Copen, will players earn the highest scores, find the rarest elements, and witness the true endings. 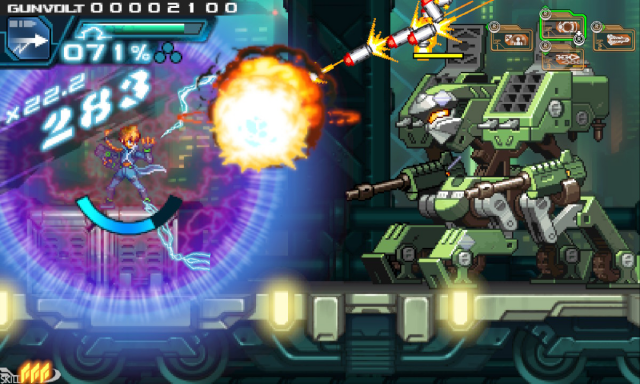 This bestows upon The Striker Pack high replay value, especially for action-platformer fans who enjoy attempting the perfect run or high score. On the flip side, it makes the initial run in each game rather lackluster and anticlimactic. For example, certain challenges for individual stages don't become attainable until after you beat the stage once. Aggravating the situation are two issues: level design, particularly in the first Azure Striker game, that's limp and boring; and end-of-stage bosses that are exponentially more difficult than the rank-and-file that came before.

The second Azure Striker game atones for these problems by introducing more varied and interesting level design, and by featuring less erratic difficulty spikes. One level, in which dual-colored platforms will appear or vanish depending on when Gunvolt's flashfield is on, is particularly good. 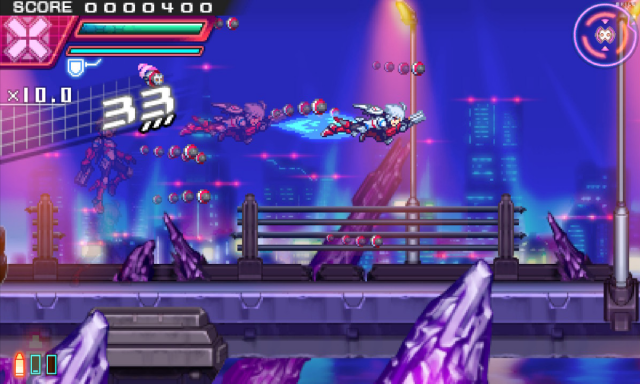 Like a lot of old-school or throwback games, The Striker Pack will reward players who keep coming back for more. Players will get from the compilation what they put into it. Multiple playthroughs reveal more secrets, more combos, and more knowledge to players. Unfortunately, because of some tedious levels and taxing boss fights, they may not return after the initial run.

This review is based on a digital copy of Azure Striker Gunvolt: Striker Pack for the NS, provided by the publisher.

To be honest, I was one of these guys who tried the Megaman Zero series but was never able to get past the first bosses cuz I guess I sucked at them,lol.
I'm still gonna get the physical version once it's released, but I hope it won't be tedious as it sounds.

I own the first game on the 3DS, will double dip to get it and the second one on the Switch. It is a great game, reminds me of Mega Man X but in no way a carbon copy. I do hate later stages because I agree some of the level obstacles and challenges are cheap... but then again that is just how Mega Man style of games work.