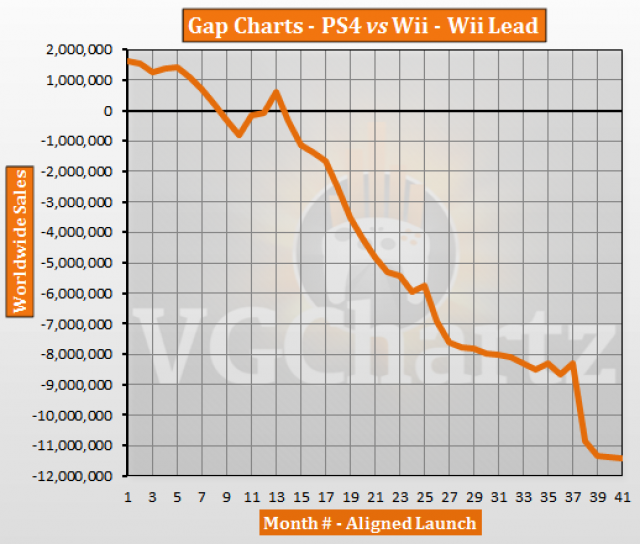 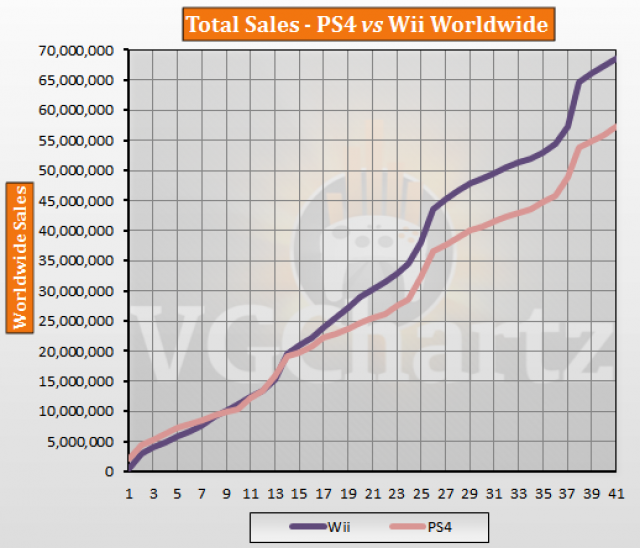 How far are we to the slowdown? I'm sure ps4 will catch it eventually but those wii numbers are fantastic

So based on the current Projections, PS4 should close some ground this year.

Maybe. Yearly sell through according to Sony

Sony is forcasting shipments this fiscal year to be down 10% YOY so there is little reason to expect sell through to be up.

Either way, the lead will likely remain relatively stable, i cant see it growing or shrinking by any more than 1 million this year.

Based on the projections, PS4 should fall a million or so behind. PS4 in 2016 sold slightly less than Wii 2010. This means the PS4 would have to be up YOY to close the gap.

There's nothing announced that should make people expect PS4 sales to rise, and Sony's projections indicate that they're not hiding some sort of megaton announcement.

based on what's been said here I agree with zorg. The gap won't shrink or grow that much, but I expect ps4 with a more stable decline in wii's 2010-2014 equivalent. Those years will be enough to put it upfront imo

Last I checked, Sony's projection for the PS4 in 2017 was 18m. If they meet that, it'll put them 500k ahead of the Wii they year on aligned launch.

So 2019 will be the year PS4 makes me the most ground, while Wii sells 5 million in the aligned year, PS4 should have no trouble doing well over double that in 2019.

Azuren, 18 million is the forcast for shipments in the fiscal year, not sell through in the calender year.

Last fiscsl year PS4 shipped 20 million so they expect shipments to be down 10%.

It's worth noting though Zorg, that at the end of last year there were almost 4 million PS4's on shelves, so they can ship less and still sell more to consumers. Unless they're planning to have 5 Million on the shelves at the end of this year, they're forecasting higher sales to consumers.

yes, that is possible. I just took a look, at the end of 2015 there were 1.8 million units on shelves vs 3.7 million at the end of 2016 so it seems as though Sony may have overshipped a bit last year.

Three and a half years in and the Wii is still gaining... if the Wii outsells the PS4 in their fourth years, are we going to be done calling the Wii a fad?

Calling the Wii a "fad" is obviously an exaggeration, but it does make more sense in the context of the 7th gen's length. It was absolutely crushing everyone at the start of the generation (it sold more in 2007 and 2008 than the PS3 and 360 combined), but by the end of the gen both the PS3 and 360 had gotten relatively close to its total. I think that warps people's memory. Even a lot of Nintendo fans seem to think the Wii's sales drop was more aggressive than it actually was.

In reality the Wii's sales did start dropping quicker than normal (it peaked in its 2nd full year), but it still maintained great sales for another 2 years, and was competitive for a 3rd. Calling it an overall fad is silly.

People in these charts have been talking about how the Wii is going to drop like a stone for around two years, although they've been quieter now.

I'm not sure exactly what you mean by competitive. The Wii outsold the other two for four years, and wasn't too far behind the fifth. It only stopped selling in 2012 when Nintendo pushed the Wii U instead. Third parties had already largely bailed by that point, but if Nintendo decided to launch the Wii U in 2013 (which in retrospect may have been a better decision) the Wii could have pushed out an extra 5-10 million.

By competitive i mean its sales had slowed a lot by year 5, but it was still selling comparably to the PS3 and 360. Year 1 and 2 it was an absolute monster, year 3 and 4 it started to decline but was still pulling in great numbers, and year 5 it dropped a lot but was still competitive. Make sense?

it was a market leader for the start of the gen then fell sharply behind the last couple years. Didn't happen to PS2, PS1, or SNES

I'm sticking with the prediction that I posted in last month's comparison thread.

I removed the spambot comments. ;)

Give it time! PS4's going to take the crown in this battle.

My best friend's ex-wife makes Bucks75/hr on the laptop. She has been unemployed for eight months but last month her income with big fat bonus was over Bucks9000 just working on the laptop for a few hours. Read more on this site.....
========== www.FlashCash3.com