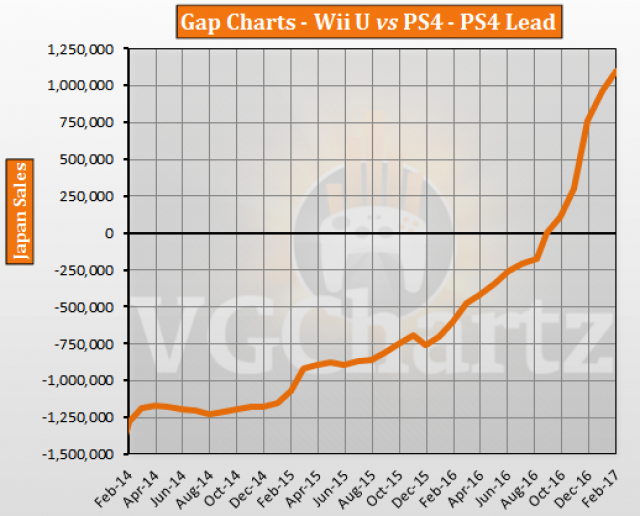 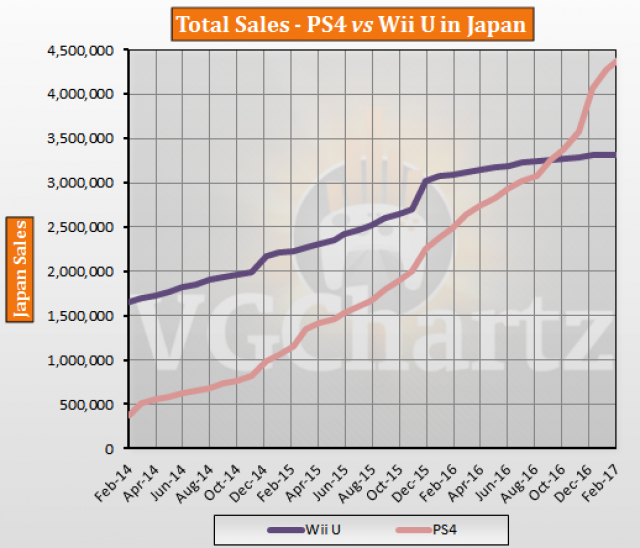 In its latest month on sale in Japan the PlayStation 4 outsold the Wii U by 133,614 units and has extended its lead. It also sold 1.70 million more units in the last 12 months. The PlayStation 4 currently leads by 1.10 million units.

This comparison is nearly at an end. What an enjoyable roller-coaster it's been. Congrats ps4!

Although, since it gets so much views... I can understand!

Why you keep making that comparison? Nintendo has killed wii u in 2016 ( They curtailed the production despite the huge momentum from splatoon and super Mario maker in Japan and they announced switch release date early... )
Also Nintendo has stopped producing and shipping wii u in Japan in the end of December!
It currently has only 18k units on the shelves!
Supefluous comparison!

Ugh why does refreshing the site after posting duplicates the post...

Personally I really like this comparison. Wasn't too long ago that a lot of people claimed the ps4 would never pass out the Wii U in Japan. It's a nice little reminder.

You keep adressing to me?
Yeah, it was not a logical prediction for several reasons.
Anyway, in defense of them, I have to say that they couldn't foresee that Nintendo would kill wii u, they were basing that on the splatoon mania effect ( and super Mario maker to a less extend..). You know the new ip title that stomped the latest major installment of the long series of FF, Final Fantasy xv, which is on a console with a much bigger userbase...

The last part of comment, oh? I behaved like you, eye for an eye and tooth for a tooth, albeit I'm more a fan of turning the other cheek ( you don't know how many times I have avoided answering you ) , but it depends on the case...

Likewise I've ignored answering you many times. So don't feel too special haha. And welcome to the Kerotan Klub. I like you more when you talk dirty to me ;)

Anyway I addressed you because you're always on these articles trying to downplay the comparison while leading us to believe you don't actually care about the vita winning. Yeah right. If the Wii U was winning you'd not be downplaying anything.