Bomberman is one of those 90s gaming icons that limped into the twenty first century. With the rise of 3D graphics engines and huge open worlds, top-down maze games fell out of fashion, and with them went the cheerful white bomb-layer himself, Bomberman. Now, 10 years after his last appearance and 33 years after his gaming debut, Bomberman is back with his seven siblings in Super Bomberman R. Co-developed by Konami and HexaDrive, Bomberman R is split into two main modes: story and multiplayer. In many ways, Bomberman R is the tale of two games, as its story mode disappoints while its multiplayer mode — especially its local multiplayer mode — entertains.

Set in the Starry Sky solar system, this newest Bomberman game follows the heroic White Bomberman and his seven put-upon siblings as they attempt to rid the system of the evil Professor Buggler (formerly Bagura). Up to two players can play through the story's 50 levels, which span across five planets. The story is simple and inoffensive, and told swiftly via animated cut-scenes. 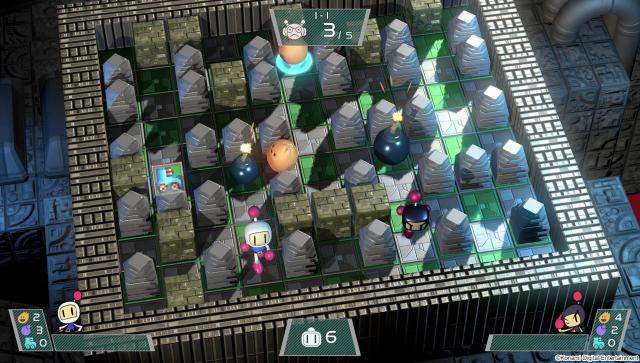 50 levels may sound like a lot, but they go by quickly. Worse, they're mostly boring. Konami and HexaDrive attempted to spice things up with different objectives, for example rescuing stranded civilians or finding hidden keys, but even that variety doesn't do much to elevate the repetitive and shallow gameplay. Making matters more frustrating in story mode is an isometric camera that makes it difficult to judge gaps and elevation changes.

There is a bright spot, however: boss battles. Every ninth or tenth stage, the Bombermen siblings face off against one of the five Dastardly Bombers. Round one is a cat-and-mouse game with each Bomber's robot form, and round two is a battle against his or her giant mech. Both are rewarding and challenging, and break up the monotony of the main campaign. 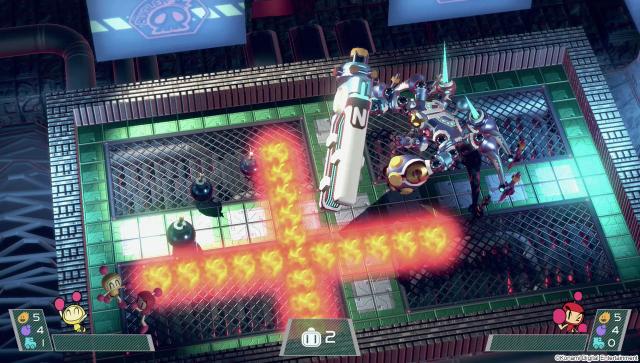 In any event, the selling point of any Bomberman game is its multiplayer mode, and it's here where Konami and HexaDrive perform on more stable ground. Local multiplayer is an absolute blast (forgive the pun). Up to eight players can join locally and battle on the same TV, according to a wide range of custom options: number of rounds; time; starting position; skulls (bad effects); pressure blocks (sudden death); and revenge carts, which allow defeated players to hover outside the map and toss bombs back in. Moreover, players who want to practice solo can fill matches with bots. It's all very fun and addictive.

There are even more multiplayer options online, including "Free" and "League" battles. Free battles are your typical Bomberman multiplayer fare, with options for friends-only rooms and customization. League battle is more like the "For Glory" mode in Super Smash Bros. Players compete with others from around the world, earning (or forfeiting) battle points that unlock access to higher leagues. They can also earn coins, which are redeemed in Bomberman R's shop. Unfortunately, online play suffers from slight lag. It feels like each Bomberman is moving at three-fourths speed. As of March 10, Konami has promised an update to fix the problem. 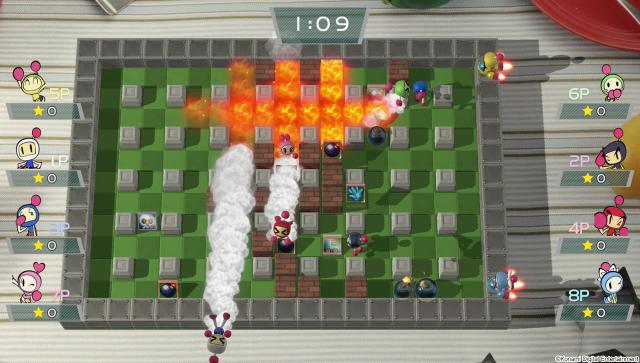 Back to the Bomberman R shop. It's a strange thing. Accessories, characters, and multiplayer maps are available in exchange for coins. These coins are earned in story mode and across multiplayer, creating an incentive to keep playing in order to unlock everything the game has on offer. However, players earn coins slowly and shop items are expensive, creating the potential for frustration for those who expect instant gratification.

So, that's Super Bomberman R. Story mode is a chore, outside of entertaining boss fights. Online multiplayer is robust but suffers some technical issues. Local multiplayer is the best of the bunch, and a nice way to spend a Friday night with friends. After seven years of nothingness for the White Bomber, it's a serviceable but unadventurous return to form.

This review is based on a retail copy of Super Bomberman R for the NS, provided by the publisher.

I find this game really hard. I cant even get past the first world in easy mode.

Yes, it's very hard! But it's always your own fault. They key is being patient, but that's easier said than done.

Yeah almost every time I die I'm like "man that was a stupid thing to do' haha. I just need more practice, but right now I'm still toobusy with botw

Right you are - fixed.

Idk why, but I really was under the impression that Super Bomberman R was 2D. Not 3D... kinda of turned off from the game now x.x

I like that Bomberman is making a comeback but I wish they would revisit Bomberman 64 style 3D again.

Off-topic, but I just noticed Bomberman 64 in the WiiU eShop the other day! Pretty cool :)

I finished this recently and think it's quite okay.