It’s been eight years since the original Halo Wars graced our Xbox 360s and in that time fans of the niche product have hoped almost in vain for more of the Spirit of Fire and its crew, pestering Microsoft for years for a follow up. It may not have sold nearly as well as its FPS brothers, but Halo Wars managed to cultivate a loyal fan base that loved it for its streamlined strategy experience and cinematic story.

Eight years is a long time for any series, spin-off or otherwise, to be absent, and with the release of Halo Wars 2 the world is a very different place, both in terms of the Halo lore and in real life. StarCraft II: Wings of Liberty was released not long after Halo Wars for example and, at the time, it set the RTS scene alight. Creative Assembly, who were drafted in to develop Halo Wars 2, developed four entries in its Total War series in that time, including its first fantasy mash-up with Total War: Warhammer. Mainline Halo, too, has changed, moving away from its military shooter roots and fully embracing sci-fi fantasy with Master Chief being a sort of 'Chosen One'. 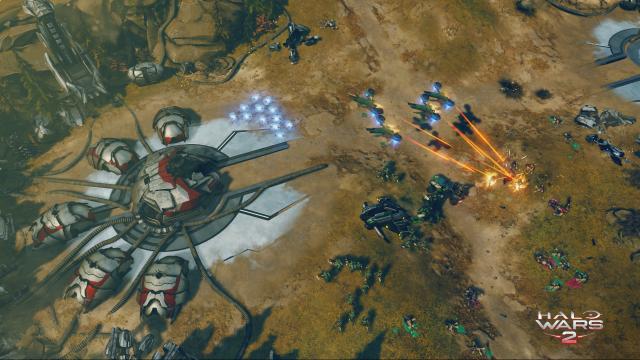 Thankfully, Halo Wars 2 almost ignores all of this, taking Halo back to its more simplistic origins. The entire story can be boiled down thus: The Spirit of Fire and its crew has happened across The Arc, a mega-structure which creates Halos. A sub-sect of the covenant, the Banished, have set up camp here and are planning something universe-changing that the Spirit of Fire’s crew must thwart.

This simplicity harks back to the original Halo Wars and is something that's been absent from the franchise since 2010's Halo: Reach. It's a refreshing and welcome change of pace that translates over to the gameplay. Throughout the campaign the combat is streamlined enough to be almost trivial: build a base, complete side objectives (if you wish), build up an army, and take on the main objective of the mission. Some missions deviate from this formula by imposing a time limit, but for the most part the old tried and tested RTS beginner's strategy works: max out your army capacity and then attack with all you’ve got.

This approach works masterfully on simpler difficulties, you’ll need to vary up your tactics on harder ones. This is where the returning hero abilities come in handy. Simply pull the left trigger and you’ll be presented with an assortment of tricks that can help you out in all sorts if situations, such as ordering a bombing run that demolishes enemies, or calling in an ODST Strike Force for back-up. Each hero ability uses up resources, however, so if you’re constantly using them you’ll need to ensure that you're mining resources across the map.

This may not sound all that dissimilar to the original Halo Wars, but Creative Assembly haven’t rested on their laurels. Naturally, new units are introduced throughout the campaign, some of which would even feel at home in (or borrowed from) StarCraft, like the new Kodiak tank which can become a siege tank with its secondary ability. The expanded range of units adds a new layer of complexity to an otherwise predictable sequel, with the right units having to be picked for the job at hand, rather than the player just building the most powerful units and going to town with them. 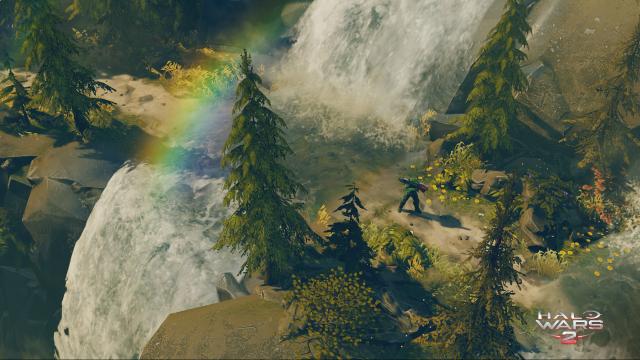 Visually, Halo Wars 2 is a mixed bag. On the one hand the particle effects employed in the course of firefights are tremendous, blocking out the screen and units with fantastic explosions that are sure to delight. The environments are just as visually detailed, with trees, grass, and all manner of flora looking strikingly detailed. Strangely, and annoyingly, the units themselves let the visuals of Halo Wars 2 down. The simplistic nature of these models makes them almost look like Mega Bloks toys plonked in an otherwise lovingly detailed environment and you can’t help but notice this difference in tone and style. 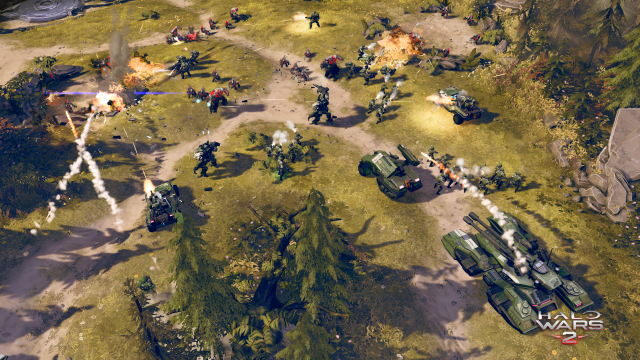 Once the campaign is finished there are plenty of reasons to keep coming back to the game. The amount of collectibles and challenges scattered throughout is superb, including of course the series' Legendary difficulty and all that comes with it. There’s also a new Blitz mode, in which players use cards to immediately place units on the battlefield and take control of sectors. This mode is fast and hectic, pushing your multitasking skills to the extreme.

All of these pros unfortunately come with a few drawbacks. Bugs are perhaps the most notable of these. Multiple times throughout the campaign, and in other modes too, I’d find my units getting stuck on terrain, not moving at all, but at the same time still reducing my unit count. Then there were the handful of times that levels failed to even load, forcing me to quit out of the game, boot it up again, and then reload from a previous save/level. While these bugs are infrequent, they’re imposing enough to annoy, especially if you’re in a tight spot in a level and need all of the troops you can muster. 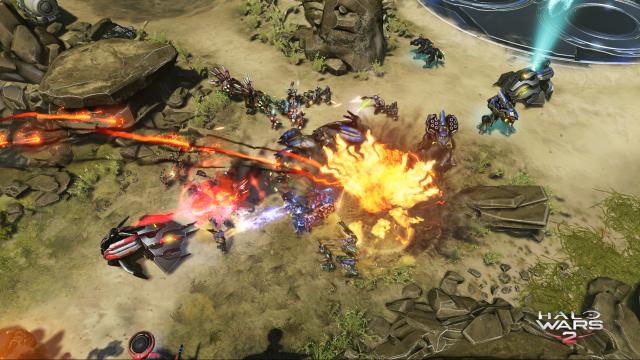 The limited buttons on the controller is also a drawback. There were multiple times where I would have loved to have divided groups of units into sections, quickly switching between them and developing a strategic plan of attack, but was unable to do so. Creative Assembly have managed to do good with the D-pad and its shortcuts to bases and units on the map, but there just isn’t enough fine control over the battlefield, causing one too many instances of losing units in the middle of nowhere because you can’t select them properly.

Those negatives thankfully don’t do too much to detract from a very welcome sequel. Halo Wars 2 manages to take a relatively solid foundation laid down by its predecessor and expand upon it in carefully calculated ways. This is an evolution - and decidedly not a revolution - of console strategy games, and as such won’t win over any hardcore strategy gamers. Those who enjoyed the original Halo Wars, however, will find a solid strategy game offering up plenty of fun.

This review is based on a retail copy of Halo Wars 2 for the XOne, provided by the publisher.

This was fun, picked it up cheap.

I had no real issues with my review copy except being stuck at the loading screen twice. It's Halo Wars with lots of small details improved. If you liked the first one you'll like this one as well. As for controller drawbacks, there are very few. The only real drawback is you can only make four groups (d-pad) and grouping/selecting those isn't that great. It's still the best control scheme for any console RTS besides Pikmin. And Pikmin is so different you can hardly compare it to anything else.

I guess the problems with the lack of buttons will disappear once MSoft enables Kboard and mouse support, if they keep their promise. The game seems fun, but maybe it will be better to wait a bit before buying it to let the devs iron those nasty bugs.

From what i've seen its a full 1080p presetation and it looks very clean and works well on the console, obviously its risky spending this much of a budget on a strategy game but it seems to have paid of for fans and the multiplayer modes look amazing plus the season pass also includes single player story missions, something microsft isn't known for !