The eighth gen is a time of remasters, remakes, and reboots, sure, but who could have expected a remaster of Wild Guns, a Cabal-esque shooter from the SNES's halcyon days? The remaster that no one asked for is actually pretty darn entertaining, though, as it manages to remain true to the original's arcade gameplay while adding into the mix a few new features. Only a couple of strange design choices interrupt the fun.

Wild Guns is a strange duck. It combines western tropes with science fiction, as gunslingers face off against bandits, sentry guns, and giant robots. The two heroes of the original game, Annie and Clint, are joined by two characters unique to Reloaded. Together they dodge bullets and mow down waves of mustachioed cowboys and chaingun-toting robots. 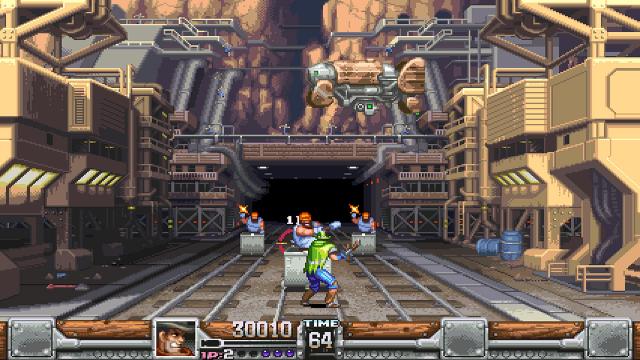 Clint is your basic "man with no name" archetype and Annie is an Annie Oakley substitute. They're both fine and dandy, but pale in comparison to Reloaded's new faces: Doris, a heavyset cowgirl who lobs explosives; and Bullet, a long-haired dachshund who fights with a hovering robotic probe droid. Seriously. These new characters fit in so seamlessly it's difficult to tell they're brand new.

While Doris and Bullet are a riot to play, they often feel more like complementary characters, and thus more useful in what is Reloaded's main selling point: four-player local co-op. Back in 1994, the original Wild Guns supported only two players. Now, 22 years later, players can blast robotic sharpshooters with up to three friends. Just don't expect to do so online, as the game is restricted to local play. 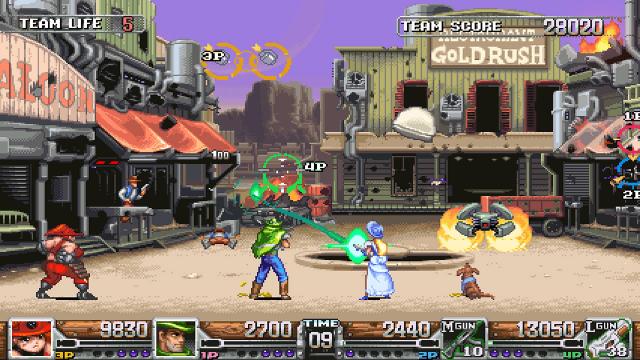 Having a few friends along for the ride turns out to be super useful as one thing that remains unchanged from the original Wild Guns is its punishing level of difficulty. A single shot can take down a hero and levels can often transform into bullet hells at the drop of a Stetson. The game mitigates the pain with continues and different difficulty levels, but these are available, bewilderingly, only in solo play. Wild Guns offers zero continues in co-op.

It's a strange oversight. More options are always welcome, especially in a game as demanding as Wild Guns. Another weird oversight is the complete lack of a tutorial or "how to play" section. Honoring the original's steep learning curve and harsh difficulty threshold is fine, but why not use the remastering process to make Reloaded a little more accessible for newcomers? 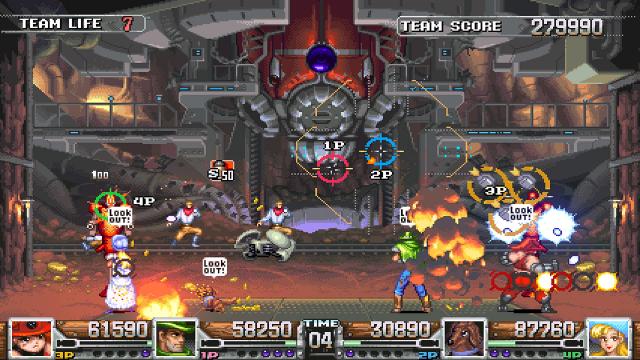 While Natsume paid little attention to customization options, it spent a good amount of time putting a shine on the game's already beautiful sprite graphics. Upscaled and converted to widescreen resolution, the visuals in Reloaded are simply gorgeous. They look especially good in two new levels exclusive to this remaster.

No one expected Wild Guns Reloaded, but that doesn't mean they should skip it now that it's here. This is a worthwhile remaster of an underappreciated SNES shooter, made better by a sharp graphical enhancement, new characters and stages, and, for the first time, four-player local co-op. The lack of continues in multiplayer and the absence of instructions might turn off novice gamers but folks who grew up in the world of coin-ops and "game over" screens will feel right at home.

This review is based on a digital copy of Wild Guns Reloaded for the PS4, provided by the publisher.

I'm having much fun with the game. I guess the idea was that playing the game co-op will be easier, but they still should've put the option of continues. Online co-op would've been nice for those of us without local gamer friends.

That being said the game is absolutely worth it.