A recent trend among small-scale video games is to reference the game industry and old-school titles. We saw Brian Provinciano do it masterfully in Retro City Rampage, which lampooned Grand Theft Auto and EA. Breath of Death VII parodied titles like Earthbound, Resident Evil, and, of course, Breath of Fire. Last year's RIVE mocked video game pacing in general and cracked wise about Gradius. The latest trend-setter is Rise & Shine, a short and punishing shooter that plays a lot like "Video Game: The Game."

Set on Gamearth, Rise & Shine follows a young boy, Rise, entrusted with a powerful, sentient gun called Shine. Convenient, right? The gun is bequeathed to Rise by a legendary hero, who looks an awful lot like Link of Zelda fame. He's slain in the first chapter by grunts from Nexgen planet, a world populated entirely by what is legally distinct from the Gears in Gears of War. Noticing a trend here? 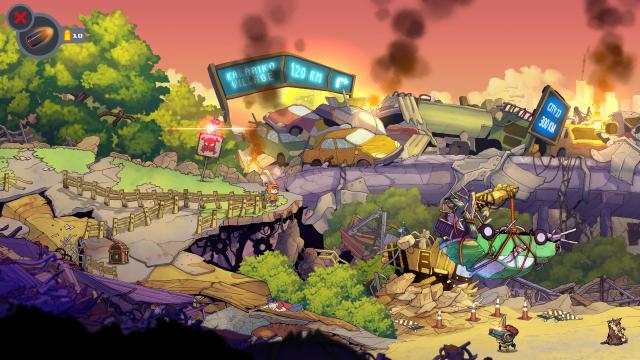 Rise & Shine wears its fondness for all things video games on its sleeve. Throughout the game players will visit RPG City and NPC Island, confront mutated Goombas, and see signs for "Bleszinski's Chainsaws." Some gags are misses, but many are hits — especially for gamers who've been around the block a few times and know their video game history.

All these references and inside jokes are simply window dressing, though. The meat of Rise & Shine comes from its gameplay, and the good news is that it's solid and dependable. The game is something of a platformer-puzzler-shooter hybrid, although shooting takes center stage. Using Shine, Rise will take cover, aim, and fire at countless grunts and droids, and, occasionally, a boss baddie. 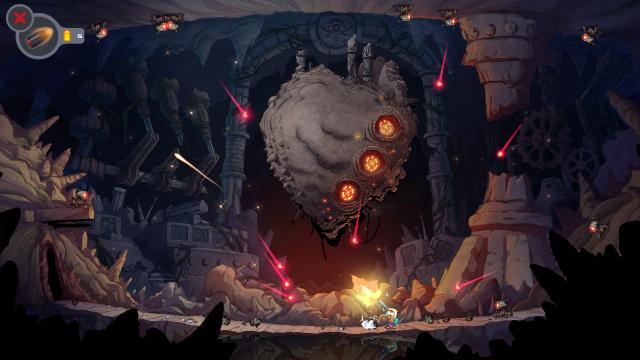 There's a good amount of depth in Rise & Shine's gunplay. Although ammunition is unlimited, Shine must reload after spending a certain amount of bullets, leaving Rise vulnerable. When available, Rise can take cover behind barricades, lean out and fire. At other times she must dodge incoming bullets or shoot them out of the air.

As the game progresses Rise will unlock new bullet types, like an electrical charge that stuns robotic enemies and a grenade-type that Rise can lob over enemy shields. There's also a remote-controlled bullet that's useful for solving puzzles. All bullet types will come in handy during the game's handful of boss and mini-boss fights, especially the climactic (and painfully difficult) battle which has Rise switching ammunition and dodging bullets on the fly. 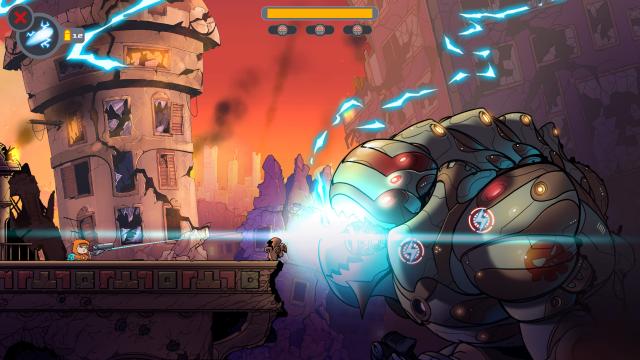 Rise & Shine introduces a lot of mechanical depth to its shooting and offers plenty of fun and challenging enemy encounters. The problem is that there just isn't enough if it. The game can be beaten it two to three hours, and that number is padded somewhat by all the retries you'll need to make after Rise is flattened, frozen, fried, and fragged again and again. There's huge potential here, but a lot of it remains unpacked.

This review is based on a digital copy of Rise & Shine for the XOne, provided by the publisher.

Looks interesting, ill check it out