I am Setsuna is a love letter to the golden age of turn-based role-playing games. Developed by Tokyo RPG Factory, a studio created by Square Enix specifically to produce RPGs, I am Setsuna borrows ideas and battle systems from early Final Fantasy titles and from Chrono Trigger. In this way, the game is a perfect foil for Square Enix's upcoming Final Fantasy XV, a huge, expensive production oriented around real-time action. I am Setsuna is, by comparison, much smaller in scale and scope but rich in the mechanics that made the 1990s a wonderland for RPG enthusiasts.

Set in a time of kings, knights, and magicians, I am Setsuna follows the titular heroine Setsuna on her quest to push back against a horde of monsters, increasing in number and ferocity. Setsuna is a sacrifice, chosen according to an ancient custom. By surrendering her life in the Last Lands, she will put a temporary stop to the monster invasion. In her party are several other heroes, including a mercenary named Endir (the main playable character), a mysterious traveler called Aeterna, and a grizzled soldier known as Nidr. 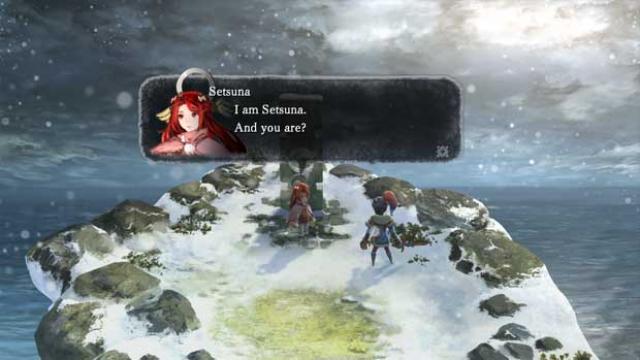 I am Setsuna is a tribute to the SNES role-playing games of old. The team of young developers who dreamed up the game's characters, mythology, and battle system clearly found inspiration in legendary games like Final Fantasy IV and Chrono Trigger. While Setsuna may never reach the dizzying heights of those classics, it does manage to tap into a nostalgic vein that's gone unexplored over the last two generations.

Players will explore the perpetually snowy lands of Setsuna with a party of three, made up of swordsmen, knights, or magic-users. In battle, characters must conform to an Active Time Battle System, which prevents each hero from taking action until an ATB gauge is full. Once full, heroes can attack with weapons, unleash powerful magic, or use items. Taking a page from Chrono Trigger, Setsuna allows two or more characters to attack in unison. Endir's "Cyclone" and Aeterna's "Charge," for example, combine to form "X-Strike." 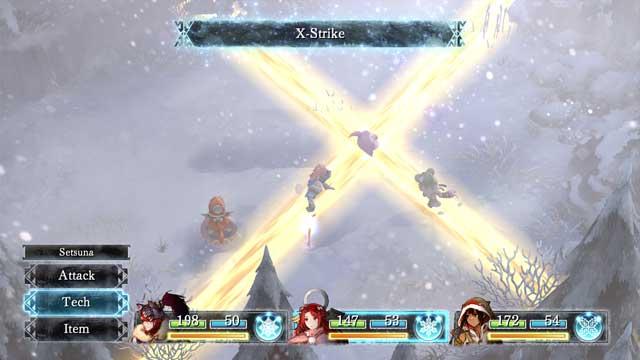 Adding depth to this system is a secondary meter which starts to fill once the ATB gauge is maxed out. Once this meter is full, players can press the square button after choosing an attack or spell to grant power boosts. For example, Endir's "Aura" will remove all status ailments in addition to its regular healing properties. The result is a combat system that's accessible for beginners but deep and strategic enough to attract and engage veteran RPG enthusiasts.

The developers at Tokyo RPG Factory were able to repurpose existing combat mechanics into an enjoyable battle system in I Am Setsuna, but were less successful in other areas. The storytelling and atmosphere in the game, while are helped majorly by Tomoki Miyoshi's bittersweet music, feels bland and flat, like reheated leftovers. 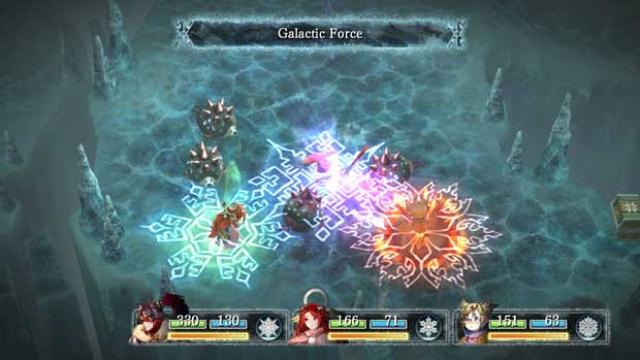 Also, there are few opportunities to explore the beautifully-rendered game world. Much of Setsuna is spent marching from point A to point B, then back to point A before ending up at point C. There are a handful of treasure chests hidden here and there, but few side-quests and hidden caves. Only when an airship is introduced do things improve. Setsuna's party then has access to a few towers (these house boss rushes), some scattered islands, and, for those lucky enough to find it, one of the best Easter Eggs in recent memory.

Had I am Setsuna launched on SNES in 1995 it would probably have been overshadowed by the greats on that system. In 2016, however, it stands out. It suffers a bit from recycled ideas and mechanics, but in terms of music, art direction, and combat it carves out a corner all its own. For fans of turn-based RPGs, I am Setsuna might be the sleeper hit of the year.

This review is based on a digital copy of I Am Setsuna for the PS4, provided by the publisher.

Great review! This game screams nostalgia and can't wait to play it! But i'll wait for a sale and after I'm done with World of Final Fantasy & FFXV.

While this game is not as memorable as Chrono Trigger or Final Fantasy IV, it's absolutely beautiful, and every JRPG fan should give it a try.

Yep agreed it's very pretty. I played it got kind of bored with it after picking up my mage but it's still a good game.

good review :) really.
And Setsuna 2 with other setting and characters next year maybe :)

My only gripe is that there are not enough side quests. By the time you get the airship, there is nothing to explore. Aside from that, I feel like this is more of an actual Chrono Trigger sequel than we have EVER gotten, and it has a legitimately fun battle system. It's just a shame there aren't more optional bosses or areas to force you to experiment more with it.

Sounds good, I'll give it a go when they reduce the price a little (I'm tight. :-P)

Not touching anything but a Vita release. This game screams "Vita", and I won't play it anywhere else.

Not to mention the Vita release didn't come over because it ran like shit on Vita. I'd rather support the dev and buy the game by any means but I still want a playable game too. I love my Vita but it's time to face the facts that it's 2016 and Vita doesn't run the latest games that well. So PS4 version for me.