An exploit in Tom Clancy's The Division, known as the Falcon Lost exploit, that made a section of the game easier was fixed last week. Players who used the exploit were able to attack the APC without triggering more waves of enemies.

Ubisoft is looking to punish players who used the exploit, according to Ubisoft’s community manager, Natchai Stapper, on the official Ubisoft forums. 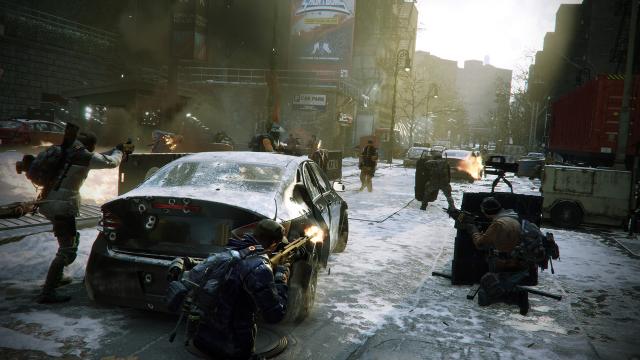 "We are working on fixing the exploit," said Stapper on Friday. "Obviously it is against our Code of Conduct and the team is looking into what can be done in terms of punishment for those who have exploited."

"Exploitation of any new or known issues or bugs is forbidden and may result in account suspension or revocation," reads the Code of Conduct page.

Seems like a bit of a dick move to me. Could maybe understand more if it was a PVP exploit, but PVE? Where's the harm in that?
Don't want people to use exploits in the game? Then make sure there aren't any in the first place. Punishing people for taking advantage of your mistake just ain't right.

The big issue with Division is that the gear you gain in the Incursion that people are exploiting then gets used in PvP and gives a very clear advantage to the player with it. I agree though, this is on the devs not on the players.

Well that's still only indirectly and isn't necessarily an advantage. I mean that equipment is obtainable without the glitch as well. Sure it may be harder and take longer but it is still possible.

Is just serves to create a larger separation between the hardcore and the casual in the game. Either way, still ridiculous that they aren't going into QA thinking "how will people work their way around this one?"

In a software suite the size of a AAA game, QA engineers have alot more work to do then sit and fucking exploratory test for exploits 24/7.

If they didn't made their Incursions annoyingly and excruciatingly hard, some people wouldn't have to recourse to this. After hours and hours of trying, I honestly didn't feel like playing anything. The incursions drains every ounce of energy out of you.

Call me a noob or whatever you like but this is a big disadvantage to online only games if you want to glitch a game it might be illegal and you can be console banned. I'm not promoting online games cheating, that's really unfair and annoying.

Ubisoft should punish themselves for allowing such a thing in the first place. Idiots.

Their punishment would probably be going back to yearly Assassin Creed releases.

A little harsh, but they seem to be trying to make it known that hacking is not acceptable.

People who used this exploit didnt hack, it was a glitch, a rift in the coding if you like, that could be used in its advantage.But it was Ubisoft fault to let that window open, and now they are trying to pin the blame on the people playing the game, instead of just admiting it was their mistake

Ahh....I see. Even worse then that they would punish.

Call me a noob or whatever you like but this is a big disadvantage to online only games if you want to glitch a game it might be illegal and you can be console banned. I'm not promoting online games cheating, that's really unfair and annoying.

They are going to punish people for a mistake they did?Punish for someone who has played their game enough to find that exploit, without hacking?Its a dick move in my opinion

Well, the dlc is not for casuals like me. I mean literally, I am not allowed to play these 2 new missions, because of weak equipment. I won't play hours of DZ for getting access to it. If the rest of dlc will be the same...then just forget it. It's a waste of money.

Go ahead and punish me for using whatever exploits I used while playing. Already traded the game back in to Gamestop. Exploits killed the game. That's on QA for only testing things "as intended" and not thinking that players would find loopholes. I mean hell, it's not like they had a game like Destiny release this gen to show them just how exploit-happy people can be.

I'm a technical QA engineer (focus on automation and databases), and I have to say: Even an extremely large QA team of 300 (fedex's manual testing team) is only 0.0075% the size of a playerbase of 4,000,000. In reality, the QA team is probably closer to 50 and usually has to focus on functional and regression tests. They probably have VERY little time to do exploratory testing like you demand.