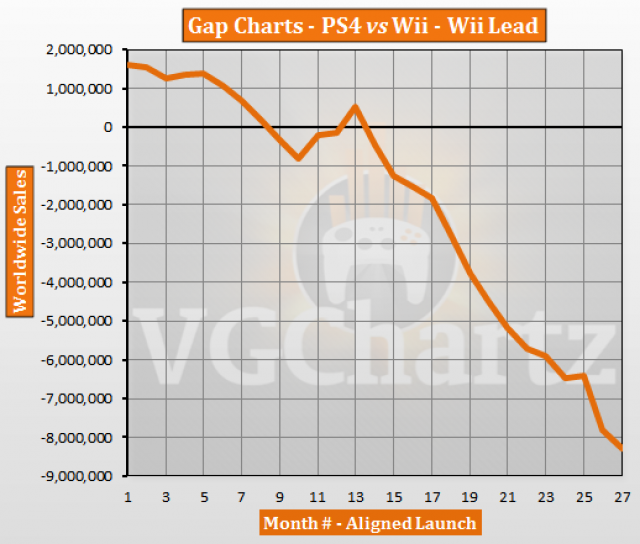 January 2016 is the 27th month that the PlayStation 4 has been available for. During the latest month the gap grew in favor of the Wii when compared with the Wii’s 27th month on sale. The gap increased by 473,383 units. In the first 27 months, the Wii currently leads by 7.02 million units.

I'll just go ahead and summarize all of the upcoming comments now in one easy to read post:

Nintendo fans will all praise the mighty Wii and claim it unstoppable; Sony fans will downvote.

Sony fans will point out a flaw in Wii's sales and that it won't have as many sales in the end; Nintendo fans will downvote.

PC and Xbox fans will generally make jokes if they post at all, some may pick a side and be downvoted by the opposing fans.

Well, no more to say for this thread

I won't. I care more about great games than great sales. I played more 360 during the Wii era.

@KLAMarine Reported for ruining my joke >:(

Will a thumbs up make it up to you?

I have a question. Considering the PS VR is coming, I'd like to know if you could make a sales comparaison between add-ons. Did the Wii Balance Board move more Wiis than usual?

@kooltrex. Yes, Wii Fit was a beast. And I think it only came bundled with the Balance Board. So I assume you could track the Balance Board sales through Wii Fit sales. It would be nice to make a comparaison between the main add-ons of each console.

@Darwin The problem with tracking Balance Board sales is Wii Fit Plus. That came both bundled and not bundled.

to be fair there is a pretty big flaw for the sales of the wii, the ps4 is going to outsell it easy.

I think the ps4 will sell 90ml

It will outsell it. If ps3 sold more than 80m. PS4 should reach more than 100m and with no competition outside US, it shouldnt be hard for ps4 to outsell it in the end.

Well The NX is Coming... We don't know what it is but it's sounding more and more like the PS4 Will have competition...

Yay for playing along with my joke

somebody had to do it.

What is this Flaw with the Wii's sales people keep talking about? Are the numbers inaccurate or something? If so, then where are they getting these numbers from and where can we get the correct information.

Casual inflation. Many Wii sales were to not-gamers who bought casual games like the Wii party games. Because it sold on a fad status, the sales dropped off after a while.

So what... That's not a flaw... That's not how flaws work. The implication that the reason behind a purchase has any bearing on the Mathematical computation of actual sales numbers is ridiculous. A flaw is an imperfection or mistake and this is a simple comparison chart. There aren't any predictions or projections here so unless the information is wrong there is No flaw. Most gamers are casual gamers.

Calm down, I'm typing from a phone and didn't want to make a ridiculously long post detailing too much when it's just a joke.

What is this Flaw with the Wii's sales people keep talking about? Are the numbers inaccurate or something? If so, then where are they getting these numbers from and where can we get the correct information.

The wii is a beast.