The Old Hunters is the first, and apparently last, piece of DLC for From Software’s latest brutal masterpiece, Bloodborne. Purchasing this DLC opens up roughly three new areas (it depends on how you divide them), introduces some unique bosses, and of course adds new weapons and equipment to obtain.

Given that DLC uses the same gameplay systems and graphics engine as the main game my primary focus in this review will be on these new features, with particular emphasis on how much they add to the Bloodborne experience. 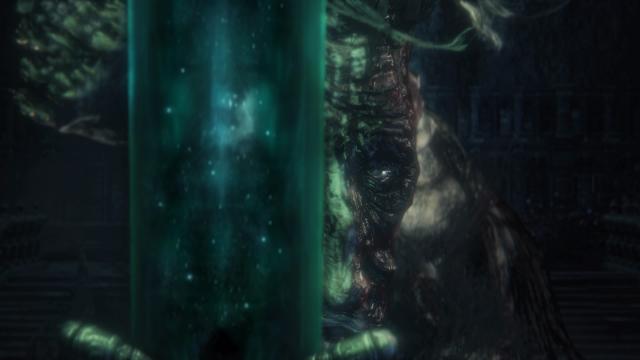 As mentioned above, depending on how you cut up the new landmass, The Old Hunters adds three new areas to the game. The first area is the most familiar and therefore most disappointing thematically, being based off an area from the main game, but the other two areas are fantastic, original additions. The second area in particular is notable for its verticality and minor puzzle aspects to unlock new sections. It also features an interesting theme which is reminiscent of the tuberculosis sanatoriums of the late 1800s. Finally, the third area feels like a water-logged Forbidden Woods from the main game.

I feel it's important at this stage to point out that, although the first area is not as original as the others in terms of theme, it is inhabited by new enemies which does keep things interesting. I particularly enjoyed fighting new humanoid-type enemies that are armed with the unique weapons from this DLC. Not only do they pose a fun challenge, but they serve as an introduction to the move-set that comes with the new weapon, and these encounters will be sure to build up your anticipation for getting your own hands on it. 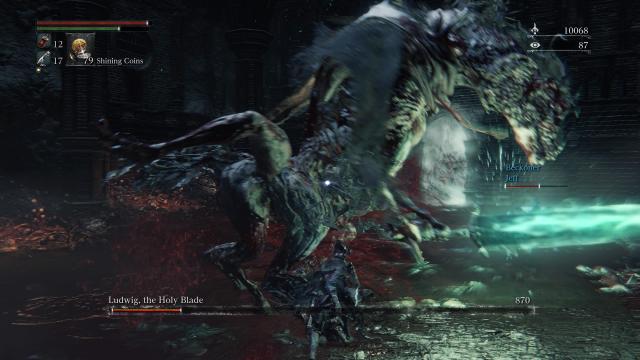 Speaking of humanoid-type enemies, The Old Hunters makes it clear how Bloodborne differs from the Souls series that came before it. Many fans complained that Dark Souls II included too many humanoid bosses, and that they were a bit too predictable for the most part. Well, Bloodborne is almost the polar opposite in this respect, because the best bosses in The Old Hunters are the more humanoid ones, of which there are two.

Because the combat in Bloodborne is more active and requires the use of invincibility frames, the more predictable nature of humanoid bosses makes for more exciting exchanges. Instead of staying away from the boss and waiting for a chance to come in and attack, you spend your time in close proximity to the boss, timing your movements with their attacks. Duels offer an exhilarating feeling that the Souls series has (thus far at least) not been able to produce, which leaves me hoping that both the Souls series and the Bloodborne series continue. 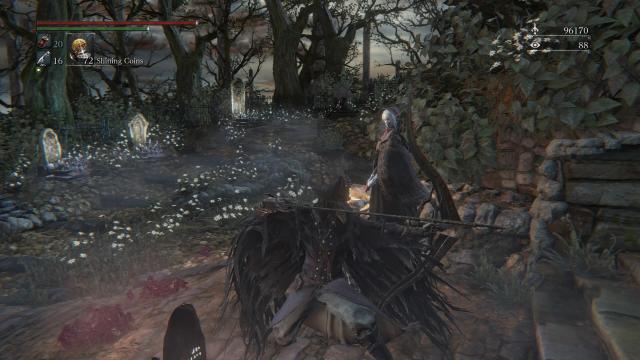 There is also a 'boss rush' kind of fight, with a constant barrage of weaker enemies, and two different larger monster fights. 'Boss rush' fights in Souls games tend to be amongst the weaker scenarios in the series because instead of taking on a formidable foe in a clash of wills you're left fighting to not be overwhelmed. It makes them in some ways unique and interesting, but they lack that epic feel that has come to be a key selling point of the series, and the same is true here.

As for the larger monster fights, one of them is fairly enjoyable, although I’m never a fan of the “I’m going to jump really high and then coming crashing down and maybe kill you” move that these particular bosses tend to have, and the other unfortunately uses a design already featured in the main game. That’s not to say that this is a carbon copy of the boss from the main game - it has its own move set and unique features, particularly in the second half - there's a strong sense of familiarity; that you've already been there and done that already. 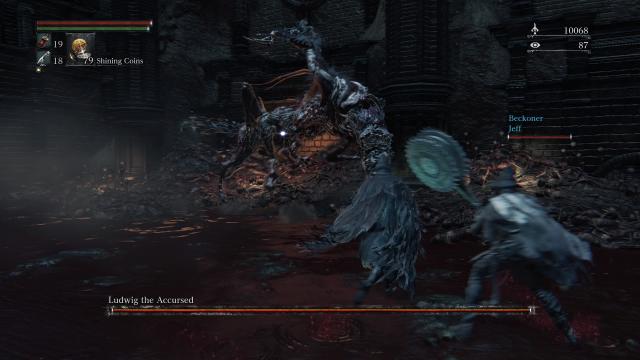 I spent eight hours playing the DLC in total, which is fairly standard for major DLC like this. I do still need to successfully defeat the final boss, however, and there are some more weapons that I still need to find, which in all should mean that The Old Hunters will take completionists around 10 hours to work through.

As far as the new weapons go, the ones that I've found thus far have felt unique enough to make them worth checking out, but I must admit to being disappointed by the low number of non-strength based weapons. 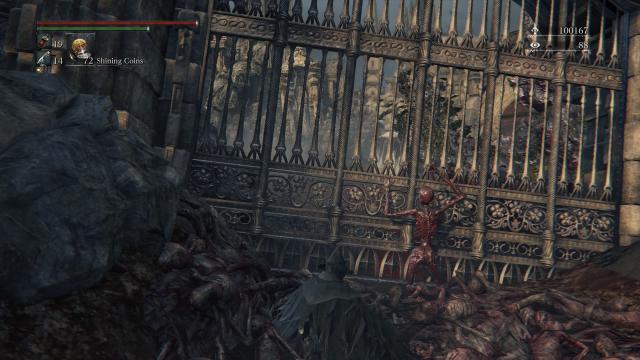 The Old Hunters is a great reason to return to Bloodborne, and in that respect it definitely does its job as DLC. Not everything that has been added is brilliant, but it successfully builds upon on the already excellent main game which makes it easy to recommend. Hopefully a Bloodborne 2 is in the offing, as I feel both Bloodborne and the Souls series, despite being quite similar, have their own unique attributes that should allow them to exist in parallel. With a bit of luck this isn’t the last we’ll hear of hunters in the night and blood infusions.

This review is based on a digital copy of Bloodborne: The Old Hunters for the PS4

I put off beating the Original game to play other things and now I feel bad about it. I need to go back and GIT GUD.

I enjoyed the heck out of this game when it came out, but now I've been playing and enjoying Fallout 4 for a while I'm too lazy to git gud right now.

Will eventually pick this up... Right now I just have too much of a backlog to justify going back to Bloodborne.

Reviewer: you should perhaps finish the game before you finish your review? :)

The last boss drops some of the most original and different non-strength weapon we've seen in all the 'souls' games. And there are quite a few more non-strength implements. Have you tried the Bowblade? Just asking.

And I disagree with you that the first area is 'disappointing'. On the contrary, I found it most enjoyable, being able to find my way through a distorted and even more demented version of the 'main' Bloodborne game. And the ability to stop and watch the game's hunters fighting the game's beasts and exterminate each other... priceless.

Well I can only try so much at the last boss, just have too much other stuff going on to slam my head against this dude for more than a few hours. I understand that that can be viewed as an excuse but I still think my point of view is valid as I would wager to guess quite a few players will never be able to beat the last boss. Maybe I'll keep working at it assuming you aren't talking about the parasite because if so we're talking about different "last bosses". I do have the bowblade but I just get disappointed that as a skill build not only are my options limited but every weapon I seem to get is made of siderite which means I can't use fire or lightning paper. It's a huge pain in the butt when I want a bit of a damage boost. I can agree that the first area is a good intro to the idea of this being a nightmare version of the real world, but I simply didn't find it very compelling.

Yes, I consider the Kos (some say Kosm) person to be the last boss and, yes, the parasite is non-strength and quite original, not to mention effective if used properly - had me and a nice cooperator destroyed by an invader using one on of those.

There is some debate in my household on whether the DLC world is 'the past' or 'the future'. The nightmare of a nightmare is the generally accepted theory but, if you look closely, the 'growth' that engulfs it seems to be lava which suggest that the DLC world is OLDER, not a younger version of the main game's location.

I dont Understand those "...And one of the worst" and ".....And one overly familiar"

:S What the hell that is supposed to mean?

"Some great boss fights...and one of the worst."
"Some interesting new areas...and one overly familiar."