PS5 Best-Selling Console in the UK in September, FIFA 22 Sales Were 77% Digital

Halo 5: Guardians sold 1,457,849 units first week worldwide at retail, according to our own estimates, which can be viewed on the VGChartz Global Weekly Chart for the week ending October 31st. 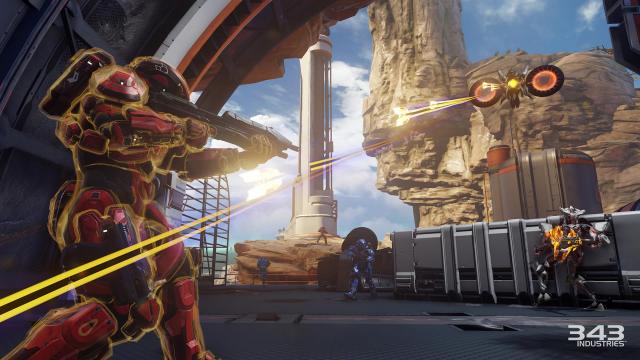 Here is how Halo 5: Guardians' first week sales compare to other games in the franchise*:

*Note - We do not have frst week sales for Halo: Combat Evolved (Xbox ) and Halo 2 (Xbox), which is why they are missing from the list

Halo 5: Guardians launched worldwide on October 27th exclusively for the Xbox One.

"Biggest launch in Halo history." Either a blatant lie, or some serious spin. I've loved and supported Halo in the past, but this kind of PR really turns me off.

They were referring to revenue, it made $400 million in one week.

Microsoft include Xbox one bundle to total revenue. Thats why it look huge.

I understood that they included revenue from multiple areas related to Halo in that figure. I just plain don't believe that it was the biggest launch. Microsoft is going to say that Halo 3 didn't bring in more from bundles, controllers, and copies sold?

With digital bigger than ever and an increase in software prices - it's not hard to believe, at all.

There is simply no way that they sold as many digital copies of this game to make up the difference that Halo 3 or even Halo 4 sold. I can appreciate that digital is on the rise, I buy digital copies too. But, I really doubt this game was bought in the massive quantity needed to match Halo 3 or 4. If we strip away all of the nonsense included in the $400m figure. We'd find that Halo 5 was a significantly smaller launch. I understand that MS wouldn't want to say this, but I don't like being misled by PR.

As a reminder VGChartz does not track digital sales. So this figure is for retail only.

Because it says retail in the first sentence of the article. No reminder needed.

I added it to the article after Trunks made his comment.

Ah so Machina added it in! I didn't remember having it there originally lol

Because that doesn't change its position on that list/ranking

I remeber this guy saying that Splatoon will outsell Halo 5. Haha.

Huge Halo vet going all the way back to the first game but, I rented this thing tonight, played about 5 matches and one mission in the story and, it's already uninstalled. The only thing that feels like the original game was the opening theme which wasn't even written by their own composer. I don't like Destiny either, and don't plan to buy it but, even THAT game feels more like Halo than Halo does now. It's so sad to see a once mighty king dethroned and gutted like this but... here we are.

You sure you've played it at all? Because the first level is actually highly praised.

"FEEL LIKE HALO"
What are you saying, feels just like Halo to me. If you want a game with less features and combat skills then go play the old Halos.


LOL at the people upvoting you. Halo haters are real.

very good game for people who like multiplayer but one of the lesser halo games for the singleplayer story and experience, sales look allright

If you were to take digital sales into mind that means between 10-15% of the Xbox owners bought this game on week1, that is amazing attach rate straight out the door.

For as much as Sony fans claim they love the Uncharted series, not one of the games received an attachment higher than 7%.

Halo3 so was on par with Smash melee for attach rate, 21m consoles and 7.1m copies of Melee sold by the end of the systems life. Some games just excel at finding their way into peoples collections, with smash and Halo if your mates are playing it... you gotta get a copy too so you aren't falling behind them in skills.

Because he and a few others are on a downvoting spree while trying to make passive aggressive jabs at the Halo fanbase, it's very obvious with those that are being passive aggressive who get the most upvotes and aren't even remotely interested or invested in the franchise and yet those that are and like how well it;s doing are getting downvoted to hell. Some on this site will claim there is no bias but it's a very anti MS site since the start of this gen and it's definitely showing. As proof I'll get downvoted a lot from people who disagree and hate me for stating the obvious instead of talking it out with me in a more civilized and mature manner.

Anti MS or Anti PC? or just a slightly more Playstation based community since if you look at sales of systems right now the numbers suggest there would be 2x Playstation fans for each Xbox fan, no hidden agenda, it's just down to system sales.

@ganoncrotch or nintendo who still has the biggest fanbase here and after looking at some of the xbox fans (superfan,truefan) I guess this site is also anti playstastion from the start.

Damn, superfan and truefan downvoted a sony fan yet again :)

Because when hitting the refresh button this site is mysteriously reposting what i wrote.

Talking out of your ass again i see.

Probably sold almost a million digital. 1.5 million at retail plus 1 million is 2.5 million if all were the standard that's 150 million. 400 million was combined hardware and software so that would mean it sold 250 million of hardware and accessories so it probably sold more than that digitally!!!

Halo is a great franchise. 1.46 millions is a lot.
Congrat Microsoft!

Might be close to 2 million with digital. Not too bad. Halo 3 is miracle selling so much with just 12 million X360. FPS is general not as famous like it used to. Even Sony biggest franchise GT drop from 10 million (GT5) to 3 million (GT6). Look what happen to Wii U after Wii success. Nothing surprising.

GT6 launched close to the end of the PS3s cycle. Halo 5 launched in the "prime" of the Xbox One so not really comparable. But Halo 5 did fine from my point of view it needs to be remembered it launched around Black Ops 3 and Battlefront which were both going to outsell it by a good margin

Hoping it will have great legs.

Wow nice! Especially for about 15M user base!

Zoombael Mate, if you make a comment on an article here you should not hit F5 before navigating away from the page, it's a bug where you resend the information as you refresh so you can make the same comment many times.

Any that's not even including digital. With a hotly anticipated title, it's gotta be huge.

Huh. I know not a lot of people have XbOnes yet, but I would have expected a bigger figure then that.

Digital purchases,it's possible that there were more of Halo 5 bought digitally than estimated.

The xbox consoles sold should also be taken under consideration. By the time Halo 3, ODST, Reach and 4 were released i am pretty sure that the x360 consoles that were sold were much much more than X1. We should also take under consideration the digital sales that are not counted towards the 1.46 million sales of Halo 5. And for previous Halo releases should have been next to zero ;)

Good numbers overall but please people, even if this game had good digital sales, it's still way below halo 3 and halo 4 so I can't stop laughing every time people bring up "but digital sales". This is the first game that digital sales has been brought up on a constant basis as if digital sales ratio were 50% or higher which is very unlikely.

I hope this means they will give Halo and break and focus on other IPs.

If you go read the overview of Halo 5 in vgchartz it says it sold 1.58 million and they are still missing sales from the rest of the world

1.58 million according to this http://www.vgchartz.com/game/82148/halo-5-guardians/ and they still are missing sales from the rest of the world... case closed.

Why is this site so cancerous to the gaming community? Say anything positive about Xbox and you get 4 or 5 down votes - in any thread. Even in an Xbox thread.

Republic of XBOX is awesome if you're an xbox fan.

Loving every minute of it - the polish and quality is amazing.

I'm expecting digital sales to be upwards of 40% for this game so the numbers are quite ok still.

Considering its only physical copies, Halo 5 is doing well, good to see, quality game too.

Jesus why so many down votes....

Most people here are Nintendo or Sony. Makes it seem like every comment about the Xbox One is a dumb one.

Fanboys will be fanboys