Ever wonder what would happen if Contra and Braid had a baby? The developers at Capybara Games obviously did. Blending the time-rewind mechanics of games like Braid and Prince of Persia, and the run-and-gun style of Contra and Gunstar Heroes, Capybara invented Super Time Force, now enhanced as Super Time Force Ultra and available for the first time on Sony platforms.

Super Time Force Ultra is a knowing and loving parody of all things science fiction and time travel related. It focuses on Commander Repeatski, a scientist-turned-military commander who sends his elite Super Time Force to the past and future to make things cooler in the present. At one point he sends the troops back to the Middle Ages in order to rescue his favorite Medieval themed restaurant. This is clearly not a man who respects the space time continuum. 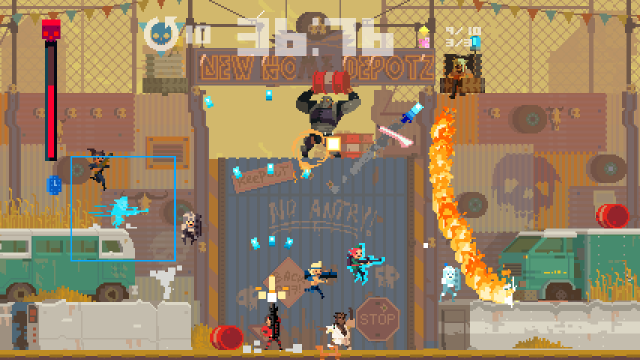 So Capybara scores high marks for presentation. On the gameplay side of things, however, the studio turns in a more uneven product. Super Time Force Ultra is a run-and-gun game with a wrinkle: a time rewind mechanic. At any time during a level, players can pause and rewind time, using one of 30 lives in the process. The new character will then join the old character's timestream, which allows the player to move more quickly through each level. This is essential, as each level has a 60-second clock. 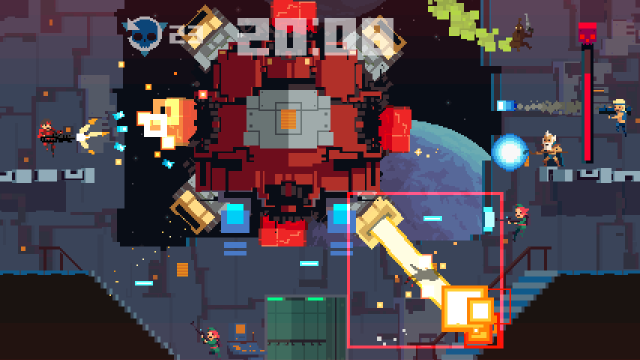 So, unlike games like Contra, Super Time Force Ultra isn't all about surviving and shooting. It's also about time management and strategy. There are over a dozen playable characters in the game, each with his or her own unique abilities. By using the "Time Out' ability, players can rewind time, introduce new characters, and combine the powers of several fighters to take down a boss or clear a level before time runs out. If, at any point, a new character prevents the death of an old one, the two timestreams can combine to create a more powerful soldier.

It's a unique and intriguing mechanic, and it makes what could be a straightforward shooter into something more complex. Yet it's a double edged sword. On the one hand, "Time Out" adds a layer of strategy and diversity to the game. Players must plan ahead and, in certain instances, sacrifice a character to make a faster run.

On the other hand, it can lead to frustrating and chaotic gameplay, as dozens of ghost characters and bullets dart around the screen. It also destroys the pacing of the game. Run-and-gun games are about speed, agility, and momentum. With time stopping and rewinding thirty times in the space of a single level, it's difficult to maintain that sense of speed. 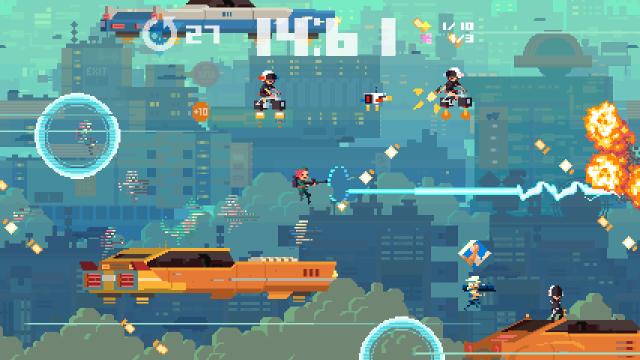 Regardless of some pacing problems and uneven gameplay, Super Time Force Ultra has a lot to offer, including interesting level design, a silly sense of humor, and plenty of secret characters - three of which are unique to the Sony version of the game. Fans of run-and-gun games and retro platformers should find a lot to like in Super Time Force Ultra, despite a sometimes awkward marriage between deliberately-paced strategy and fast-paced action.

I'm so sick of PSN PABS (Pixel-Art Bullsh!t). I guess Sony decided that since we have to pay for PSN now they don't have to give us anything worthwhile. It's embarassing that the games on my mobile phone are far superior to the games PS+ has to offer.