Take one look at Roll7’s latest release - Not A Hero - and you’d be forgiven for thinking that the studio is intent on making every genre 2D and pixelated. Billed as a “2.5” shooter, Not A Hero has you playing a team of oddball misfits that are trying to get a Purple bunny from the future elected as Mayor of London.

Their means of doing this are nefarious to say the least, with Bunnylord's campaign centred entirely around protecting normal citizens by killing off the criminal underworld (and any cops that happen to be in the way whilst you’re at it). Although trivial compared to most epic “save the world” games, it's a fun campaign bolstered by some surprisingly big set pieces that you simply wouldn’t expect from a traditional 2D shooter. 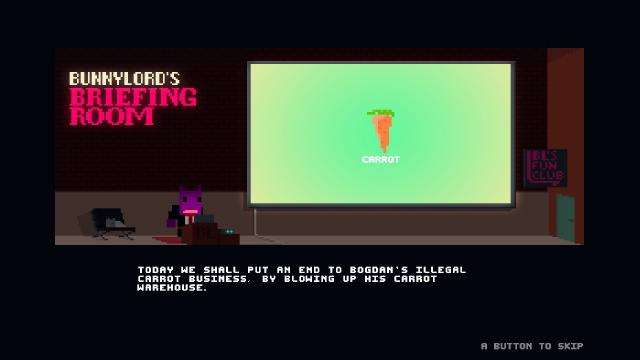 With only 21 days to go until the election that Bunnylord is standing in, I started playing Not A Hero with the mindset that it would be short and relatively easy title. The game's core mechanics have you hiding behind corners and slide tackling enemies with just a single button press, but easy it is not. At about 11 levels in I finally started to realise the brilliance of the game's simple mechanics, and how they completely rely upon clever level design to bring about challenge and adventure. It's also around this time that level finish times slowly creep up from 10-15 minutes to half an hour a piece, with instant-replayability being a core hook in getting the player to keep trying again and again.

Whilst enemies don’t change too much throughout the course of the game, their placement and the ways in which you can take them on do, and this is where the level design truly shines. Add to this the way in which every new character you unlock has a new and unique way of firing and sliding, and you can start to see that what appears to be a simplistic shooter on the surface is actually surprisingly varied. 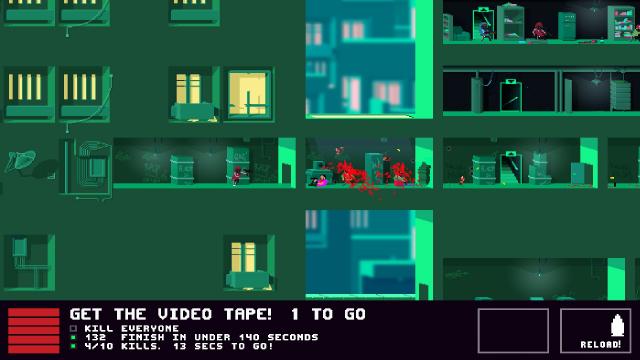 I ended up spending most of the campaign playing as a psychotic character named Mike. Mike is extremely proficient at quickly sliding and silently executing enemies, but he has a major drawback of only having access to two bullets, which makes him weak in out-and-out firefights. Whilst I found Mike preferable for my particular playstyle, the other characters are more than varied enough that everyone should be able to find one that suits their own playstyle. Other characters, for example, place more emphasis on proficiency with guns, which comes at the cost of reduced speed and manoeuvrability.

Each level in Not A Hero includes three optional objectives, which adds some replayability to the title. These optional objectives must be done within one play through of a level, however, so if you manage to only perform two successfully before finishing a level then you're out of luck.

This system meant that I would easily spend the best part of an hour perfecting a single level, with each death being a mistake to be learnt from for my next playthrough and my next attempt to complete all of the objectives. Whilst this sounds frustrating (and granted, it can be) it's incredibly satisfying when you manage to complete perfect run; a feeling not too dissimilar to when you defeat a huge boss in Dark Souls. 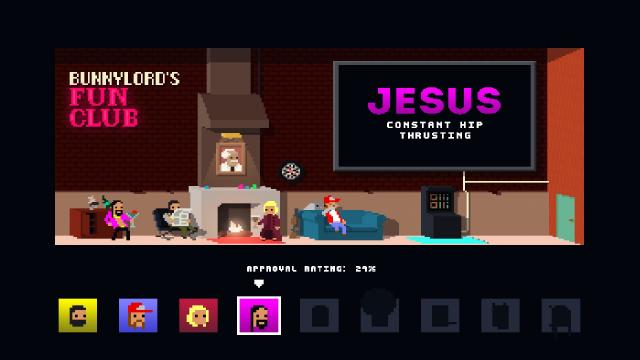 Not A Hero is also one of the funniest games I have ever played. Everything from the soundbites enemies shout at you as you gun them down (highlights include “give us a pound yeah” and "cor blimey"), to the text throughout the campaign, had me laughing so manically that my housemates began to suspect I was possessed. The lines delivered by enemies and allies alike are performed using authentic British accents, which adds to the authenticity of how hilariously stereotypical the game is.

One of the few black marks I would place against Not A Hero is its art direction, which looks lovely in screenshots but soon becomes a huge mess during big combat sequences. That’s not to say that the art style isn’t well crafted - the brilliantly animated pixel art helps to portray a gritty London underworld far better than it has any right to - but things really start to become confusing when multiple enemies are on-screen. 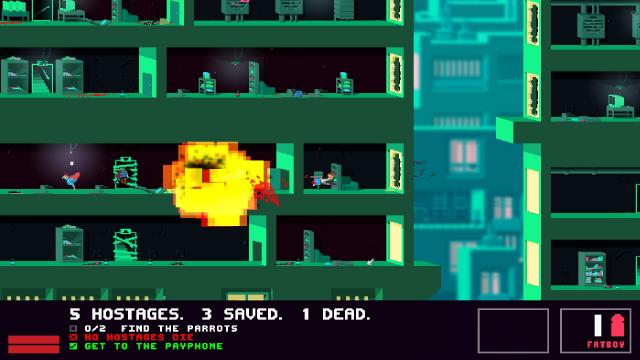 Playing Not A Hero was genuinely some of the most fun I’ve had completing a game in a long time. Its core gameplay loop stands tall amongst other great die-and-repeat classics like Super Meat Boy, and whilst it may look easy, it takes a long time to master.

It’s in the simplicity of Not a Hero that you find complexity, with pixelated graphics belying strong humour, and basic gameplay mechanics hiding a complex, balanced game. If you take anything away from this review, it's that looks can be deceiving; Not A Hero takes this maxim to heart and goes to town with it.

This review is based on a digital copy of Not A Hero for the PC, provided by the publisher.

This is actually quite fun. For the price I recommend picking it up for the laughs etc