Playtonic Games today announced its first game: Yooka-Laylee. As a spiritual successor to Banjo-Kazooie, in Yooka-Laylee you play as two characters - Yooka the chameleon and Laylee the bat - designed by Steve Mayles (who also created Banjo, Kazooie, and the modern Kong family).

In fashion similar to Banjo-Kazooie, Yooka uses his tongue like a grappling hook, while Laylee can pick up his partner and fly for a short period of time and can unleash a sonar blast. 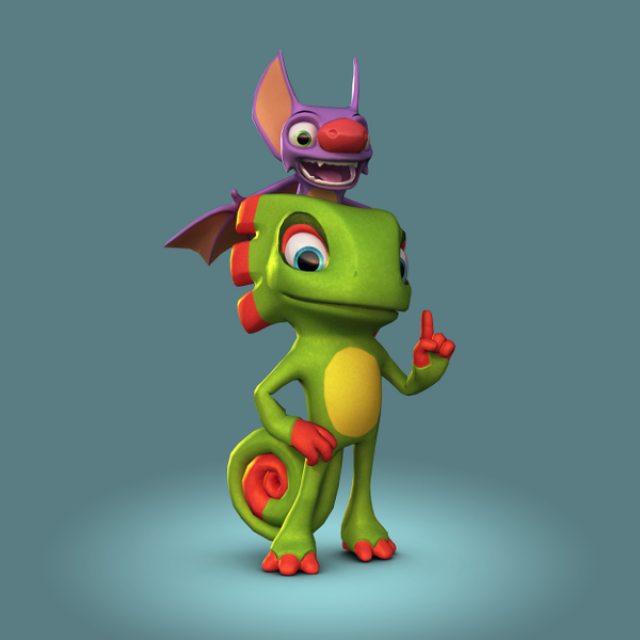 A Kickstarter to fund the game will start tomorrow, May 1st. Backers will be able to pick up the finished copy for £10/$15. There are also plans for extra tiers, which will include bonuses like the soundtrack, art books, and a special '64-bit' special edition.

Yooka-Laylee is planned to release for Windows, Mac, PlayStation 4, Xbox One, and Wii U.

My hype can't be contained!

I love this. The game im most hyped for !!

The game is planned to release on Wii U and PC ONLY right now. Not PS4 and XOne at this time. They're aiming for Wii U mainly.

I'll definitely back it, if and when they get to the stretch goal for PS4 release.

They're adorable. Are you sure they're both boys though? Would seem weird for Banjo-Kazooie descendant to not feature a guy/girl duo.

Yooka looks like a female. But nothing talks about gender of the characters, sadly.

"Yooka uses his tongue like a grappling hook, while Laylee can pick up his partner" Anyway, both look awesome. This combo can make some great abilities!

Please tell me Kirkhope is being contracted to do the music.

They look really good! Sure I'm not a fan of bats in general but I think it looks pretty cool!