I hate to have to say this, but I still have not managed to complete Convoy, Convoy Games’ debut indie title. It’s undoubtedly not something you want to hear from a person reviewing a game, but alas, it’s true. “Isn’t not completing a game a testament to how bad it is?” I hear you say. Oh, if only it were that simple. 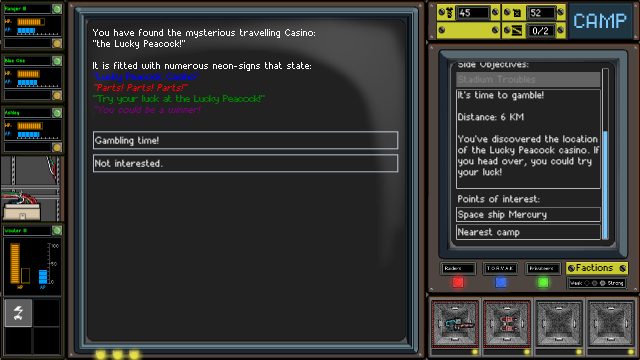 Convoy takes great pride in being a tough-as-nails roguelike, one that clearly draws inspiration from FTL, which reinvigorated the genre so passionately many years ago. The set-up is simple: your space ship has crash-landed onto a hostile planet that is host to multiple different factions, and it’s up to you and your crew to go out into the wasteland with your convoy of vehicles in order to try and find suitable replacement parts for your ship.

It’s through this narrative that you’ll set out into a randomly generated world filled with different objectives and numerous random encounters. Unlike FTL, Convoy doesn’t set you out on one clear path; it’s up to you to decide where you want to travel to and what objectives you want to set your sights on first. This allows some freedom in how you approach missions; in one play through I was concerned that I hadn't done enough side objectives to upgrade my convoy, so went about fighting random encounters across the wasteland to get new weapons and parts so that I could get by just fine in future encounters, rather than barely surviving it all.

This gameplay feature really sets Convoy apart from other contenders in the roguelike arena as it gives players access to an additional layer of strategy. Do you continue towards your chosen objective despite being low on health? Or do you turn back, risking the possibility of a random encounter that could kill your convoy as it attempts to head back to refuel and repair? Convoy never makes the optimal choice apparent, and luck will certainly play a part in the outcome regardless of which way you go. 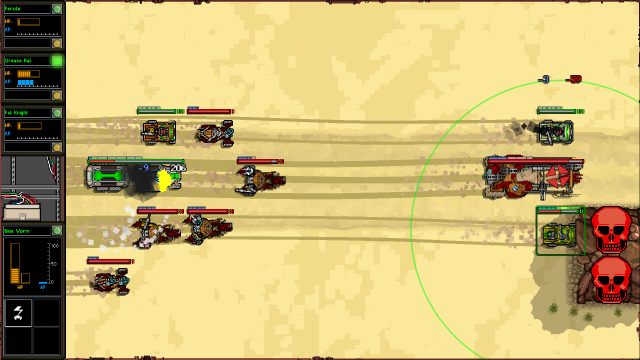 Success ultimately depends on the strength of your convoy, which starts off comprised of two small vehicles defending a large hauler. The hauler cannot move independently, and must be defended at all costs, so it’s up to the player to use the smart tactical system (pressing space to pause the action and chart out your attack pattern), to get the better of enemies and always end up on top.

Since the map is moving, obstacles will appear on the right hand side of your screen, allowing you a tactical advantage (or disadvantage) over enemies should you force collisions. Whilst the ability to use the terrain to your advantage often comes in handy it nonetheless takes a while to get used to, partially because the screen is filled with vehicles that lack distinct features (and so can be difficult to tell apart) and also because the path-finding of your friendly vehicles can be a nuisance at times.

Your convoy will always start off weak, and it’s your job to upgrade them at the many camps that are scattered across the planet using scrap pieces. Each vehicle has its own unique weapons and other upgrades that can be attached, as well as a unique upgrade tree for health and armour. If you’re lucky, some of the camps you come across will even have additional vehicles for you to purchase (up to a maximum of 4), which will dramatically increase your chances of survival on your travels across the harsh and rugged planet. 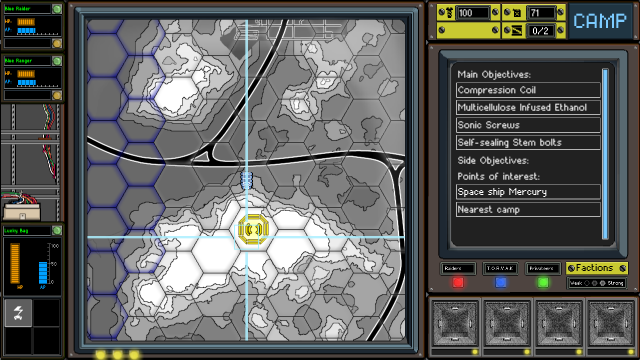 I found that upgrades are only good for so long; after a while, in order to survive, you’ll need to be lucky enough to happen across adventurers that wish to join you once you’ve helped them out. These adventurers are extremely over-powered, and will allow you to make easy work of most enemies up until the final boss. Without them, progress through the game is incredibly difficult.

Most encounters and objectives you happen upon will give you multiple options by which you can proceed, essentially allowing you to choose whether to be good or bad in any given situation. Outcomes always seem to be random, even if the encounters themselves repeat. For example, every time I encountered what I thought to be a scenario I’d happened across before, it would usually culminate in a different result despite my opting to make the same decisions, which means that blind luck plays a large part in the outcomes of events in Convoy. This ensures you're always on your toes and never safe from getting hurt at a moment's notice. 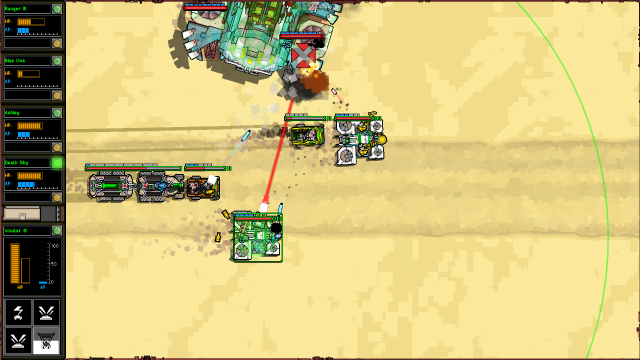 Convoy is a genuinely tough game. Even on Easy it's tough to best the game and make it back to your ship with all of the necessary repairs. The final boss fight is also incredibly lengthy, featuring multiple health bars and waves of attacks (a clear shout-out to FTL). But the difficulty is what makes Convoy so damn addictive; you'll likely spend hours and hours trying to best your own high score.

Convoy is a remarkable debut for developer Convoy Games. It is, for all intents and purposes, a fantastic spiritual successor to 2012’s FTL, and that's high praise indeed given FTL's legacy.

This review is based on a digital copy of Convoy for the PC, provided by the publisher.

It definitely takes some getting used to, but once you've played it a while you'll be fine with the aesthetic and concentrate clearly on the gameplay.

It definitely takes some getting used to, but once you've played it a while you'll be fine with the aesthetic and concentrate clearly on the gameplay.