Many gamers are understandably upset by the high price of a new game nowadays. Not all games, however, sell for full retail price. Some are even free, and Tribes: Ascend is one of these games. It’s also considerably more enjoyable than most online games for which you would pay money.

Not much background is given within the game itself. Ascend, like Starsiege: Tribes and Tribes 2, has no single-player campaign. A fully fleshed-out backstory exists, created in part by the handful of story-based games in the series, but knowledge of this backstory isn’t at all necessary for the enjoyment of Ascend.

Tribes: Ascend is a competitive online futuristic first-person shooter, with a clear emphasis on moving quickly and keeping control. Central to the game is a concept called “skiing” - the ability to deactivate the effects of friction on your body and slide around the field. Skiing isn’t a new mechanic by any stretch. It originated as a glitch in several early FPS titles, including the original Starsiege: Tribes, but has been implemented as a feature in the series since Tribes 2. Similar mechanics exist in other games, but Ascend handles the mechanic very well. You gain speed when travelling downhill, maintain it on level ground and lose it if you rise up a hill. This mechanic, twinned with your recharging jetpack, which allows you to glide over hills and soar across the battlefield, stops Tribes from being one of those slow, lumbering and tactical first-person shooters. In fact, practically every FPS is a slow, lumbering, tactical first-person shooter compared to Tribes: Ascend. 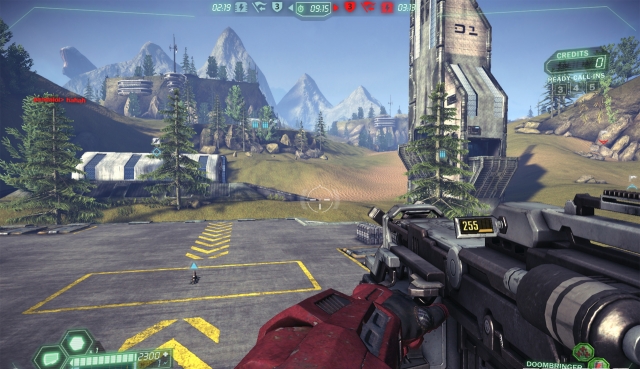 I love the game’s fast-paced nature and the skill required in calculating the trajectory of your shot as you fly through the air at 150 kilometres per hour, something which most FPS definitely lack (because you are limited to a paltry jogging speed). It can be somewhat frustrating to empty an entire clip of your weapon without hitting a single enemy, but you improve with time, and respawn times are mercifully short so even death isn’t much of an issue. I do feel, however, that life points are too high. In my opinion, a game this fast-paced should include fast kills as well. Even a direct hit with an explosive weapon will only knock off around half of another player’s health, and it is difficult to score those.

There are several different classes to choose from, but only the Pathfinder, Soldier and Juggernaut are initially available. The Pathfinder is a fast-moving scout class, the soldier a standard frontline soldier equipped with an assault rifle and explosive pistol, and the Juggernaut a slower but hardier and more powerful “tank” unit. Experience is gained globally, by gaining assists and kills, capturing flags and so on, and can be spent upgrading any class, or purchasing a new one.

Now is a good time to bring up microtransactions within the game. This being a free-to-play game, the developers need some way of bringing in some revenue, and although the idea of paying to improve your character isn’t a great one, it is entirely optional. Tribes Gold, or GP, can be used in lieu of experience points to purchase and upgrade classes. It is also rather expensive. $10, or £7, will get you 800 GP, which will buy you perhaps three weapons. Some entire games cost that much. Most of what can be bought with GP can be earned with time put into the game in the form of XP, but there are two notable exceptions: VIP status comes with any gold purchase and permanently boosts XP gain by 50%, and Boost doubles XP gained for a limited amount of time and can only be purchased with gold (a ten day boost, the most you can get for $10, costs 640 GP). Fortunately, for a limited time, you can earn 250GP by simply liking the game on Facebook; enough to buy the Spinfusor, a soldier weapon considered the hallmark of the franchise. In short, I disapprove of the very concept of microtransactions, but I can understand why they’ve been used here. 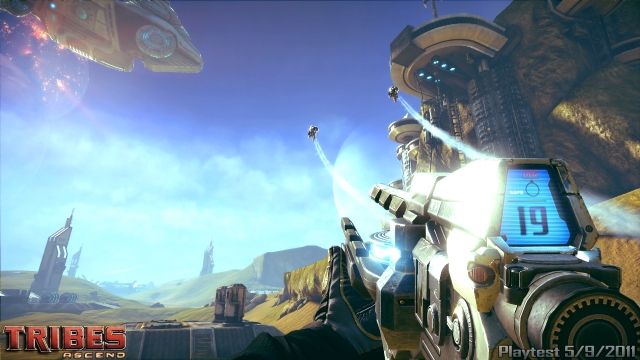 Two game modes are available when you start playing. Team Deathmatch is, of course, a team-based game that revolves around killing members of the other team, but there is a minor twist: a flag is spawned when the first kill occurs, and whichever team holds this flag gains double kill points. Each team starts with 100 lives, and one is depleted per death if your team holds the flag (or nobody does), whereas you lose two if your opponents have the flag in their possession. This is undoubtedly the most accessible mode, since there isn’t really any more to it than “shoot and stay alive”. I enjoyed this mode a great deal.

Capture the Flag is a standard flag capture mode, and there isn’t much more to say about it, except that you have base defences which can be damaged and repaired, and you can use the credits you earn in-match to purchase and use vehicles. Nobody does this, however, because credits can be used in all modes for call-ins: the Tactical Strike, the Orbital Strike, and the Supply Drop. The first two are heavy and powerful orbital bombardments, and the supply drop creates a supply station wherever you aim, which allows you to restock your weapons and grenades, or change class. I didn’t much enjoy CTF, but I can imagine that more experienced players would prefer it because it requires the knowledge of routes through which you can gain speed by skiing – the best players can cross even the largest of maps with your flag in hand in perhaps 20 seconds, far too fast to be caught. Either way, these two modes alone provide something for everyone, since they are completely different in approach. 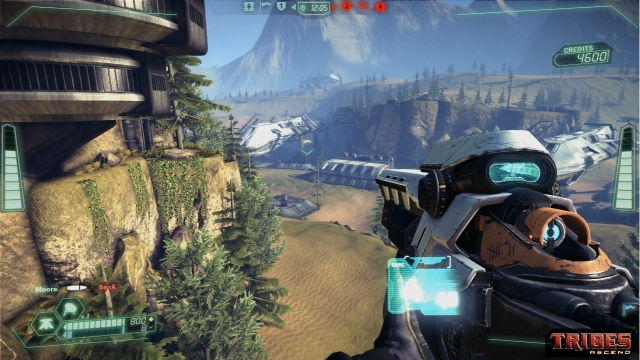 Arena and Capture and Hold are both unlocked when you reach rank 8 (your rank increases as you gain experience). Arena is a smaller version of Team Deathmatch, with only five players per team and 25 lives. In Capture and Hold, your team must (funnily enough) capture and hold certain set points dotted around the map to gain points. The first team to reach a set target wins.

Tribes: Ascend looks very impressive for a free multiplayer game. Maps are large, and there is a large draw distance, and yet everything looks intricately detailed from a reasonable distance. More impressively, and more relevant for a multiplayer game, there is almost no lag to speak of, except right when the game begins and is loading. This is crucial, because half a second of lag can mean that your enemy has moved 50 metres away from you. Like any good competitive FPS, there is an announcer, with a pleasant British accent, who describes various important events in the game. Futuristic music with a heavy beat serves to enhance the game’s fast pace, because travelling at 150 kilometres per hour with a jetpack is no fun in silence.

It isn’t really possible to discuss monetary value when reviewing a free game, so instead I am putting a value on your time. Playing the game initially and reaching level 8 doubles the number of playable game modes, and every experience point you gain can be spent on upgrading your classes to gain an edge in matches. The maximum rank is 50, but you can continue to gain experience for spending even after this cap. There aren’t very many game modes, but there are several maps to provide a healthy amount of variety. It is easy to get addicted to the game, and no two matches will ever be the same due to the enormous maps and full use of three dimensions.

In conclusion, Tribes: Ascend is a highly enjoyable and refreshingly quick shooter. It, as a free game, puts the majority of paid first person shooters to shame. Microtransactions are used, for the most part, tastefully, and aren’t too much of a hassle when you remember that you haven’t paid anything for the privilege of playing the game. It’s not completely unique in being a fast-paced FPS, but it implements its mechanics skilfully to create a great online multiplayer experience. Best of all, you have nothing to lose by downloading it for free, so there’s no reason not to give it a shot.