So you're reading a rather excellent article on gamrReview when suddenly ninjas, thousands of them, attack! "You're late", they shout. After fending off their chakra-laden fury, they congratulate you for surviving and invite you to play the newest fighting game in the Naruto series, Naruto Shippuden Ultimate Ninja Storm Generations. As per the unwritten ninja rules, you agree to virtual combat in CyberConnect2's acclaimed series because of its reputation and because it's a good way to rest after fighting thousands of ninjas. 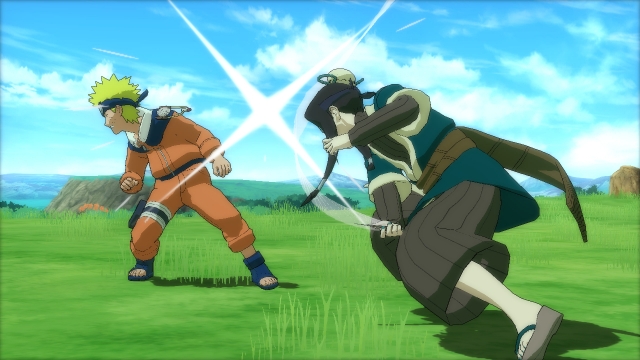 Upon starting the game, the beautiful graphics wash over you like a glorious waterfall of color. Once again, no expense has been spared on the visuals as you find yourself teleported into the Naruto anime. From the animations of elemental attacks to Naruto's curiously non-stealthy orange jumpsuit, everything looks almost identical to the anime. You even notice this as a cutscene from the anime plays on-screen. You wonder to yourself, "Why can't my real life ninja battles be so colorful, vibrant, and fluid?" Then you come to the realization that if the world looked this bright, video games would not be needed.

Two ninjas take the controllers and show off the gameplay to you. You're not surprised by the familiarity of the game, as it's very similar to the previous installment in the series. Fighters face off in wide-open locations taken from the Naruto universe. The attacks are mapped to only one button but they can change based on the direction of the analog stick, jumping, or use of Chakra (which adds power to basic moves or summons special attacks at the expense of your Chakra meter). Shurikens can be thrown as projectiles to chase down a far away enemy, and items can be used for both offensive and defensive purposes. Support characters can also be summoned throughout battle to give you an assist, giving the game a Marvel vs. Capcom feel. 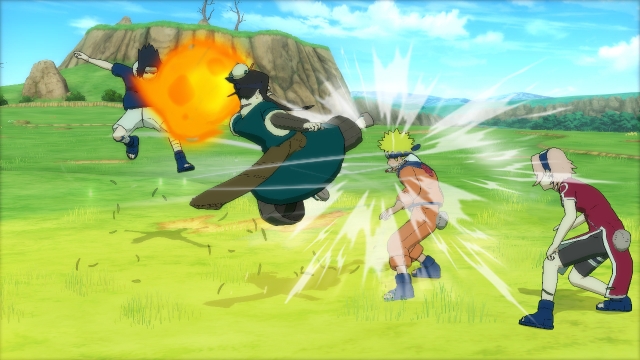 While watching the battles, you realize the substitution system has changed: instead of using the Chakra meter, it now has its own meter. Substitution allows you to move out of danger from enemy attack, but you only get four uses at a time. Running out of uses before the meter recharges could leave you stuck in a nasty combo or lethal special attack. Managing your substitution meter is the key to every battle you watch, as evidenced by the hoots and hollers of ninjas who break their enemy's meter.

Awakening mode brings out the most cheers from the spectating audience. Characters can enter awakening mode at certain moments, which makes them much stronger, in an attempt to make a comeback in the match. Cheers were had as Naruto entered Nine-Tailed Fox mode and laid waste to Sasuke. But in the rematch, Sasuke had his own awakening and crushed the little troublemaking Naruto. 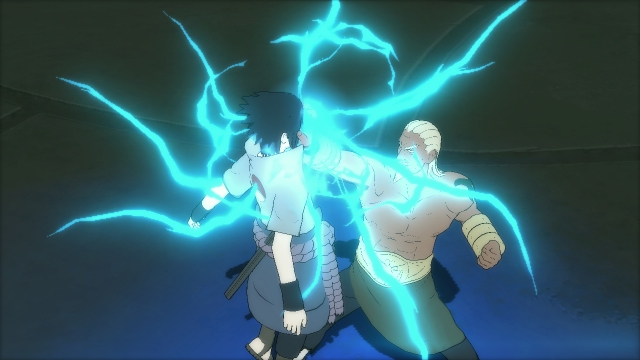 A popular ninja known only as "Super Steve" approaches you and offers to show you the story mode. You accept, because Super Steve is a good guy with your best interests at heart (and has a super sharp dagger). The story mode is more streamlined this time around: cutscenes are a mix of fully animated scenes and character portraits with accompanying dialogue boxes. Much like the game, the animated cutscenes look vibrant and beautiful; certainly a sight to behold. Multiple "tales" exist that look at the story of the Naruto series from the viewpoints of many different characters. Exploring the village is no longer a part of story mode, as it was in the original game, but what is available is solid, so you get over your disappointment quickly.

Outside of the story, there are a variety of online and offline modes. The standard head to head battle exists, as you saw earlier, but Super Steve also makes a point to brag about his win in the recent tournament between him and his fellow ninjas. You sense that he may be exaggerating his accomplishments, but he knows his stuff, so you trust him on this. He also shows you all of the collectible rewards he gained while playing through the game; items that will drive the die-hard Naruto fan to collect everything.

Finally, the main event begins; your new ninja friends begin an online battle with another village of ninjas in a far away land. First up, standard online battles. You are intrigued by the almost lagless experience as ninjas battle across the world for virtual supremacy. Then, they switch to a Ninja Info Cards battle, where virtual trading cards boost a variety of stats and abilities to further customize the upcoming online battle. It adds some much needed variety to the battles, though it can get confusing to those not wanting the added depth. 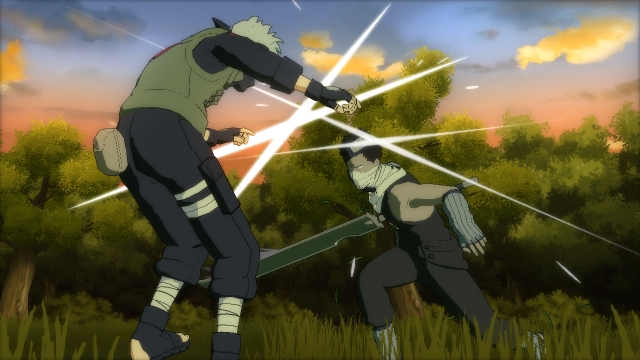 The game has a robust roster of over 70 characters. But due to the simplified attacking system, they all play about the same way, with only special attacks differentiating one from another. Some of these characters are also merely younger versions of their older selves, further adding to the redundancy. Non-Naruto fans will likely get bored of this large roster quickly. The collectibles increase game length, but again, not for those who do not greatly enjoy Naruto. Like many anime fighters, Naruto Shippuden Ultimate Ninja Storm Generations is designed mainly for the existing fanbase and it delivers just about everything that fanbase would want. Outsiders can still find enjoyment in this well made brawler, but likely not for long.

The ninjas turn to you and hand over the controller. Now it is your turn to face off with the opposing village, as an honorary member of the CyberConnect2 ninja village. Will you take the challenge and win one for your new ninja brethren?


This review is based on a retail copy of Naruto Shippuden Ultimate Ninja Storm Generations for the PS3, provided by the publisher.