What would a world inhabited entirely by robots be like? It's a question that intrigues and sometimes scares people. It is this kind of world in which Primordia takes place in. Horatio Nullbuit and his floating companion Crispin are minding their own business when they are suddenly attacked by a strange, vicious robot who's none too happy to see them. The robot steals the power core that fuels their ship, the UNNIC, stranding them in the dunes with little in the way of emergency power. Horatio and Crispin must survive this dangerous situation, but their plight turns out to be only a small occurrence in the overarching story.

Primordia falls squarely into the point and click adventure genre. That means you can expect all of the strengths (strong storytelling, worldbuilding) and its weaknesses (limited solutions leading to frustration at times, short game length). This won't be the game to change your mind if you don't like this genre. But if you're at least open to the idea of a point and click adventure, Primordia's certainly a fine choice.

Primordia's world is well detailed and explained throughout the game. I wanted to learn more about it as the game progressed. Good thing, then, that there is a deep backstory hidden behind the simple backdrop that Horatio and Crispin first see, and once the game tears into that meaty part of the story you'll be hooked.

The visual style of the game is pixel sprites and it looks great in motion. It's the same art style seen in Wadjet Eye's last game, Resonance, and it brings the post-apocalyptic world of Primordia to life. The graphics make Primordia's world believable, accentuating both its darker side in addition to its silly, clever humor. Similarly, the music sets the mood well, and the voice acting is high quality (and includes Bastion's popular narrator, Logan Cunningham). It makes the humorous exchanges between Horatio, Crispin and the other characters that much better.

And that humor is excellent. The characters of Primordia, being robots, make plenty of wisecracks involving technology and math, and they're so very clever. One robot judges another robot based on the numbers of Pi he can remember, while plenty of jokes are made about robot parts (including poor little Crispin's lack of arms). You even get some deeper, awesome references to some other post-dystopian literary classics (try taking the plasma torch to Horatio's bookshelf). I was chuckling and laughing and in awe at the references and jokes made in Primordia.

Like most games of its ilk, Primordia will task you with various puzzles and information gathering quests that require you to be a good, critical thinker and reasoner. It's mostly standard adventure game fare, but I did enjoy the times where Horatio needs to craft usable tools out of various pieces of junk. It's not immediately apparent which pieces to use, but Horatio's ability to MacGyver his way out of a troublesome situation is fun to experience. The game did get to become a bit too full of fetch quests for my liking as time wore on, but I was alright with it because Crispin broke the fourth wall multiple times to echo my complaints. At least the developers at Wormwood Studios commiserated with me.

Game length is disappointing when compared across all genres, but compared to other point and clicks, it's standard fare. If you know what you're doing, you can probably beat the game in under four hours, but most likely you'll be trying to figure out the puzzles and how to progress, so I'd say an average playthrough would likely last 8-10 hours. For a price of $10, that's plenty of time and you won't feel cheated at all. The game will be available on Wadjet Eye Games' site at launch. Primordia has been Greenlit for Steam but is not yet available. If you cannot wait, purchase the game through the Wadjet Eye site and you'll be e-mailed a Steam code when the game goes live there. Two copies of Primordia for $10? That's a great deal.

Primordia is another good point and click adventure game in this new-age era of the genre. The game's charming wit, solid story and excellent dialogue will make your ride a fun one. It may not change your mind if you cannot stand this genre, but for everyone else, there is plenty to enjoy in the world of Primordia.

This review is based on a PC download of Primordia, provided by the publisher. 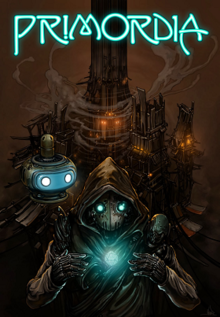