The idea of Sonic the Hedgehog, the fastest animal alive, driving a race car is a silly one. But Sega made it work in 2010 - Sonic & Sega All-Stars Racing was a smash hit in the kart racing genre. Now Sega and Sumo Digital return for the sequel, Sonic & All-Stars Racing Transformed. This is a racer that stands tall among the competition and will make you forget, if only briefly, about that other popular kart racing series. 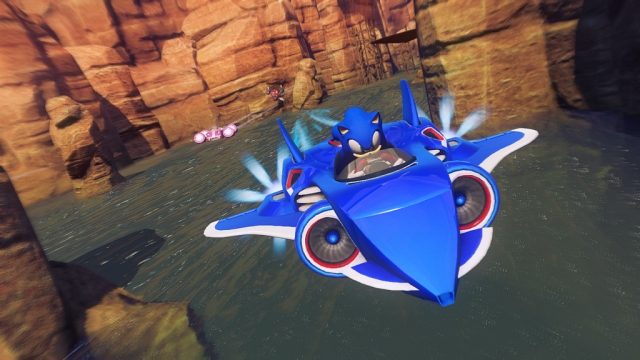 Much as the title suggests, Sonic & All-Stars Racing Transformed will take you through the worlds of Sega games past and present. The game's many tracks take you through the expected locales (Sonic, Super Monkey Ball, Samba de Amigo) and through much of Sega's back catalog of franchises (Skies of Arcadia, Golden Axe, Jet Set Radio and more). The franchise selection is solid and the courses do a good job of placing you in those universes.

The gameplay is as you'd expect from a kart racer; sliding long enough moves you between Drift Levels 1 through 3, which increases the speed boost bonus. The weapons have been changed up a bit from the first game but are mostly the same. A remote controlled drone replaces the K.O. rocket as the homing projectile, the Blowfish does double duty as either an obstacle on the field or a forward projectile that bounces around the track, and the Hot Rod is the obligatory speed boost with a twist in that you must fire it off before it overheats (it also functions as a fire attack that hits everyone around you). If you've ever played a kart racer, you'll get used to everything pretty quickly.

The main new feature is transforming race cars. At various points in the race you'll pass through Transform Gates which can change the race car into a plane or a boat. It changes up each race and keeps it interesting, as there are different dynamics for each transformation. The planes tend to be a bit faster than the other vehicles, while the boat is the most difficult to control (turning at high speeds can be a problem). While in the air, racers can perform multiple stunts which lead to speed boosts upon landing (for the car and boat). Hitting the ground mid-stunt, however, causes the stunt to fail and cuts speed dramatically. 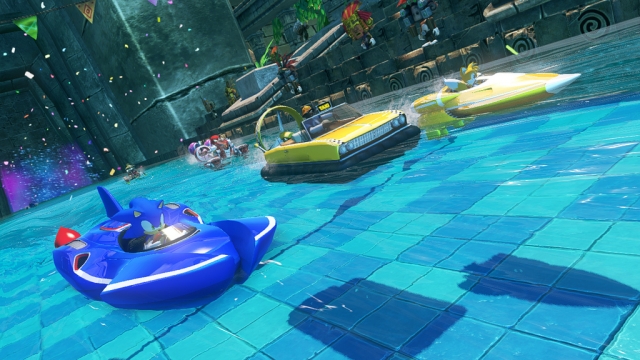 Over twenty different characters make up the Sonic & All-Stars Racing Transformed roster. Naturally, Sonic leads the way alongside five other members of that series, but a wide variety of characters are on this roster, such as AiAi, Vyse, Ulala, Amigo and more. The Wii U version has Mii as an exclusive, while the 360 version gets the Xbox Avatar. As with the previous game, the PS3 gets no exclusive character. Wreck-It Ralph from the Disney movie of the same name is also on the roster, and bizarrely, a cartoon version of Danica Patrick (the real-life race car driver) is here as well. Advertising at its finest.

The meat of Sonic & All-Stars Racing Transformed lies in World Tour mode. Here, a set of challenges are offered. Some are straight races, others are drift challenges, boost challenges, versus mode races, and battles. Each challenge has an A, B, and C class ranking. You choose which ranking you're aiming for, and if you pass the requirement, stars are awarded. More stars are given for completing the higher class rankings, and these stars are used to unlock new stages, challenges, and characters. When not racing friends or online, this is where your time will mostly be spent and many hours can be had picking up stars and collecting all the unlockables.

Other single player modes include genre staples like Grand Prix, which has you competing in a group of four races; Time Attack, which lets you strive for the fastest time possible; and Single Race, which is a simple one race mode. 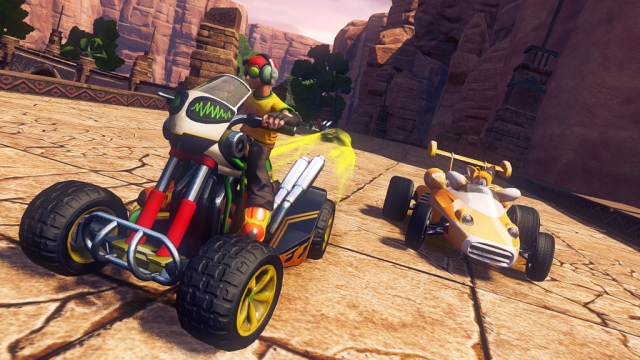 When it comes to multiplayer, the standard racing and battle modes are available both locally and online. Local players also have access to a mix of mini-games in the Party Play section. Multiple local players can also connect online and play an online match together against foes worldwide. The online play is rather minimalist. There's a race mode, arena mode, and Lucky Dip, which randomly selects one of the two. It also features online rankings. It's not going to wow anyone, but the multiplayer is solid and effectively done.

Graphically, the game brings the wacky hijinx to life much like its predecessor did. The tracks have been well crafted and there's plenty of attention to detail. Though, for Wii U players, when the game is switched from the TV to the GamePad, quite a bit of visual fidelity is lost. In a game like Black Ops II, the GamePad play looks almost as good as that on the TV, but there is a sizable fidelity drop for Transformed. When the game is on the TV, the GamePad displays the race course, but can also be used as a weapon camera and a rear-view mirror.

Sound design is spot on here. The tunes match the series that each track is based on and will elicit plenty of nostalgia if you're familiar with those franchises. Sonic fans in particular should love the Sky Sanctuary song. Also, the All-Star item that makes racers temporary invincible has its own theme for each character (the Knuckles rap is back!). Sega and Sumo did a good job with the musical fan service. 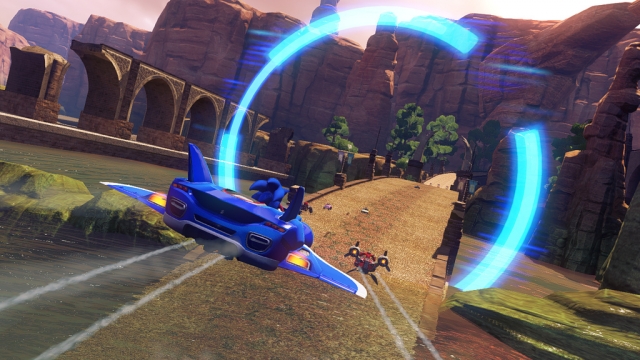 There have been some glitch issues with the game (particularly the Wii U version) that you should be aware of. A Day 1 update caused multiple Boost challenges in World Tour mode to become unwinnable, and a glitch in Ninja multiplayer mode automatically gave the win to the GamePad player. Some other glitches existed as well. The patch has since been applied to the game.

This review is based on a Wii U copy of Sonic & All-Stars Racing Transformed.