If you’re an old enough gamer to remember old school action-platformers, you remember how difficult those games could be. They tested players constantly, often pushing them up to and past their breaking points. Black Knight Sword harkens back to a time when such experiences were more commonplace. It attacks you mercilessly, gives nothing up easily and makes you earn every accomplishment, while adding in that weirdness and eccentricity that only Suda51 can deliver. 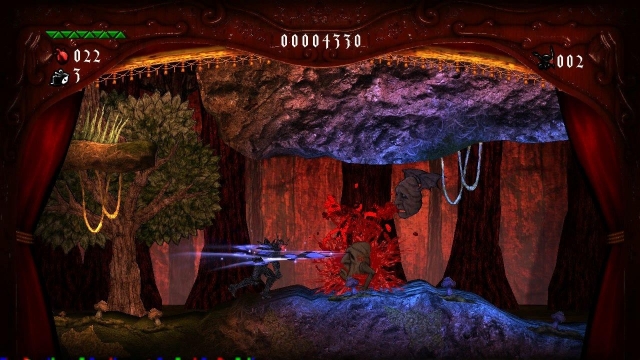 Right from the start, you will be drawn into Black Knight Sword’s distinct, bizarre style. The entire game takes place on a stage of sorts, with curtains on screen, similarly laid out to a kamishibai (paper drama). The foreground in which the Black Knight romps and the background are completely distinct, so the Black Knight and the enemies seem to “pop out” like they would in a diorama. The art style is crazy, grotesque and absurd – it’s basically par for the course for Suda. Along with that style comes a haunting soundtrack that fits the dark, bloody atmosphere. The game’s absurdity can be likened to the British comedy series Monty Python. Random off-screen arms will point you in the right direction, power-ups are found inside microwaves, and collectible Cat Head Grasses can be found in each level. At times, it’s not going to make sense. Throw away your Earthly logic and dive into the batty happenings ofBlack Knight Sword; you’ll appreciate it much more.

Controls are much like a standard action-platformer. You jump and you attack while also gaining new skills upon completion of levels. Your sword also has a spirit which can be shot forward as both an attack and a way to activate switches and the spirit also can summon magic skills. Enemies start out weak but get stronger, from plodding faces to large paladin knights to giant birds. The levels also get longer and much more intense as the game progresses. You will often be tasked to make difficult jumps and slay challenging enemies, sometimes both at the same time. 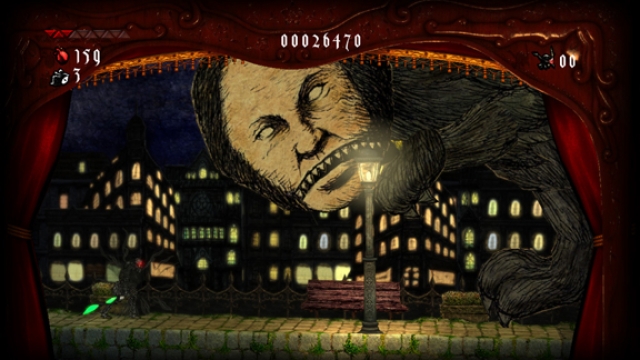 Some of the later levels can take about half an hour to traverse. This helps make up for the small number of levels in the game, but at times these levels drag on and will test your patience. On occasion the platforming will give way to another challenge, such as shoot ‘em up inspired segments. As you might expect, these segments involve the Black Knight riding a giant chicken and shooting pellets at enemies (it’s completely normal for chickens to do this, right?).

Health and lives are limited in Black Knight Sword. This isn’t a game you can rush through and hope to complete by trial and error. Great care must be taken to ensure you do not lose all your health and lives, because these pick-ups are few and far between during the levels. To get more upgrades for health, lives, armor and more, purchases must be made by selling hearts to the shopkeeper - a terrifying circular beast that zaps the upgrades into the Black Knight. And yes, that is actually one of the most normal things that happens in this game. 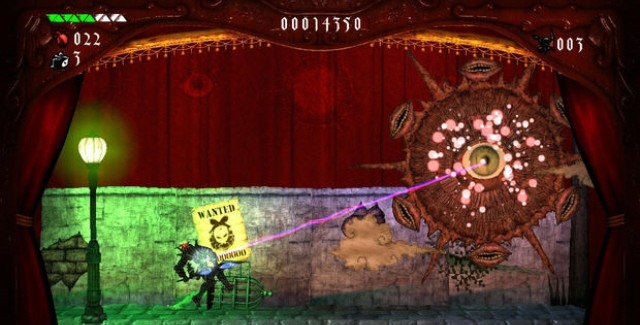 It is clear from playing Black Knight Sword that the intent was to emulate old-school classics. But I believe the game may have done too good a job at that. There is no auto-saving feature, which means that an ill-timed death could lead to having to replay for a long period of time if you have not been diligently saving after each checkpoint. These days, auto-saving has become a standard feature in most games, so to have it removed and force the player to save constantly is uncomfortable. Allowing autosaving would not have made the game any less of a legitimate challenge, so it is a questionable omission.

Additionally, the game’s difficulty settings do not jive with what I would consider to be the normal gamer. Easy mode is not too challenging for a traditional gamer, as the Black Knight gets plenty of health to let him survive. Normal, on the other hand, is far more difficult, and I definitely do not recommend it for a first playthrough, unless you feel up to a great challenge. It seems to have been built with playing during a New Game+ in mind, as it will let you keep health and armor upgrades. But why call it “Normal”?

Outside of the main quest, there are the Arcade and Challenge modes. But these two do not change up much from the campaign and serve as afterthoughts. Arcade changes some enemy placements and ends the game once all lives are lost. Challenge mode has some brief segments in a similar vein to time trials, but the gameplay of Black Knight Sword just isn’t as engaging in this form. 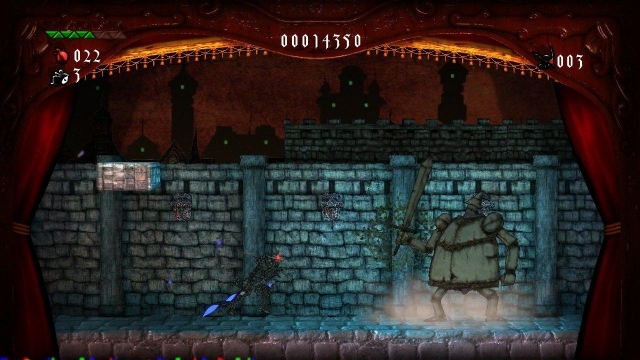 To wrap it up, if you're not proficient at platforming, stay away from Black Knight Sword. This is a trial by fire set up for the best of the best and is definitely not for new players to hone their craft. But if you are up for the challenge, Black Knight Sword is a great little gem that will chew you up, spit you out, and test you with all its might before crowning you a champion of the genre. For just $10, it’s a steal that all dedicated platforming fans should jump on.

This review was based on a PSN digital download of Black Knight Sword, provided by the publisher.