You need to join this club.

Reviewing sports games is always a challenge. Often, a key component to reviewing a game is how much the game has changed from its predecessors (or if it hasn't changed, if the game has become stale). Sports games, on the surface, don't seem to change much, if at all, because they're working on making marginal improvements to an already well-tuned engine and shipped on an annual release schedule. But what looks like a stagnant genre belies a well-oiled machine that is consistently changing things behind the scenes and adding new features to the mix. I will tee off this review by saying that Tiger Woods PGA Tour 14, like many sports titles before it, follows this same path. And there is absolutely nothing wrong with that. 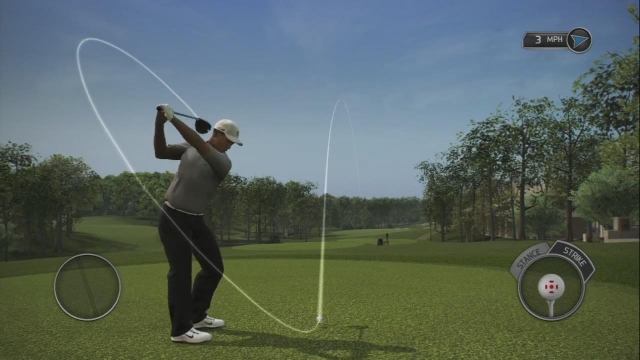 Golf is a sport that exudes a relaxing atmosphere, which contrasts with the intense, action-oriented nature of most other sports. That relaxation is captured fully in Tiger Woods PGA Tour 14. Even the main musical theme is soft and pleasing, entrancing the player into a zen-like state. On the links, there are no complicated defense patterns to worry about or plays to call - it's simply you against the course. Take your time to pick the right club, the proper distance, and your preferred stance. Once everything is set, all you need to do is swing. The arc of your golfer's swing will appear on screen. Push the analog stick back to begin the swing, then forward when the golfer's club reaches the top of the arc. In a normal stance, you only have to push the stick straight up and down to make a shot, but different stances will require you to push the stick back and forward at various angles to get that perfect shot. (Controls can be changed so that you only have to push up and down, regardless of the stance.) It is a good control scheme that puts challenge into each shot without being overly frustrating.

Environments and players look life-like. Great care was taken in making Tiger Woods PGA Tour 14 the most authentic video game representation of golf on the planet. If you compare the courses in this game to their real-life counterparts, you will notice an incredible number of similarities. All efforts have been taken by EA Tiburon to make everything correct. It was a bit odd, though, when the crowd would give me a nice applause even if I messed up a shot. (If I fire a shot from one side of the green and end up on the other side, that's not applause worthy, that's me being terrible at the game.)

There are several different game modes available, which cater to various levels of player investment in the game. Those that just want to play a round on the links can easily do so with Quick Play. Those looking for a heavier investment can begin a career as a player-created golfer and rise the ranks from qualifying to golfing champion. Online mode offers team modes in the form of Country Clubs, which accumulates results from every member of that country club and ranks all of the clubs. And for those looking for some golf history, Legends of the Majors lets players take on legendary players from the game's past, including Arnold Palmer, Jack Nicklaus, Gary Player and Seve Ballesteros. 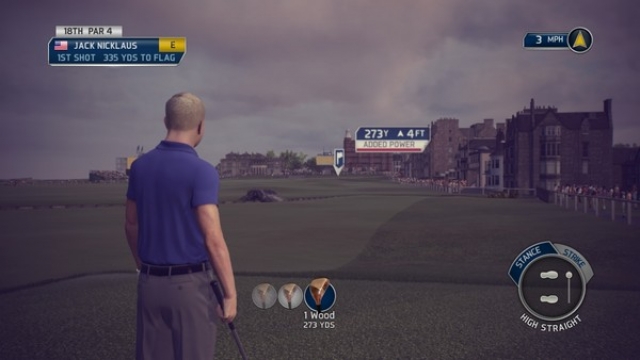 There are twenty different golfers available to play as from the start. This includes fifteen male golfers, among them Tiger Woods, Rickie Fowler, Bubba Watson and Rory McIlroy and, for the first time, five female golfers, the most popular of whom is Paula Creamer. Available tournaments include the four majors (US Open, The Open, Masters, PGA Championship), various PGA Tour events, additional events around the world, and for the ladies, the LPGA Tour, making its series debut.

Online play has been enhanced with the Connected Tournament mode, which lets you watch up to 23 other players' shot arcs as they compete with you on that course. In my experience, everything ran smoothly and should be a fun experience once the game is released to the general public. I do not foresee any big online issues occurring, since golf tends to be more of a niche interest in comparison to EA's other online ventures, but obviously I can't guarantee that to you.

Another interesting new addition is Night Golf. In the real world, golf is never played at night, since it would be too difficult to see the ball. But with the magic of video games, balls are now illuminated and you can experience all of these great courses at night. Ok, so it's a minor thing, but I really enjoyed it. It reminded me that for all of the realism presented in Tiger Woods PGA Tour 14, this is still a video game, and a video game can do some unrealistic things once in a while. 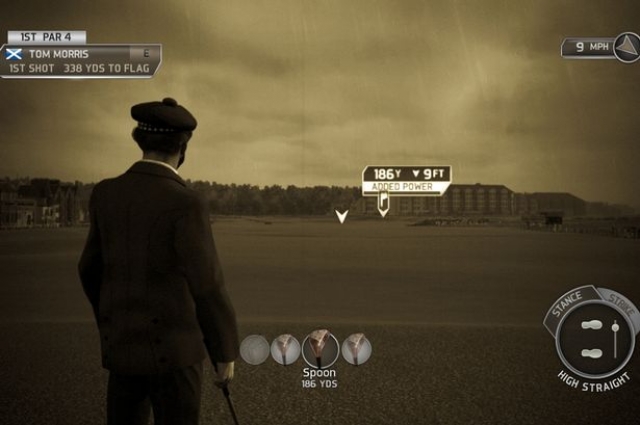 Two versions of the game are available, the standard Tiger Woods PGA Tour 14 and the Masters Historic Edition. The latter will cost another $10 extra but includes six extra courses. The most interesting is Augusta National 1934, which is the Masters course as it was in 1934 when it first began the tournament that is now famous. What is really awesome about this course is that each golfer dons clothing and uses golf clubs from that era. The presentation is also just like a grainy, brown film from the thirties. It is a really cool romp through history that golf fans will love. Also included is the Augusta National Par 3 course, home to a popular event that takes place the day before the Masters. These two courses are exclusive to the Masters Historic Edition, while the other four courses that come with it can be purchased as DLC on the regular release. So if you do not have any interest in the Masters' origins, you're better off purchasing the regular edition.

EA's DLC system from previous Tiger Woods games returns. By now, everyone should understand that having a large amount of DLC is EA's business strategy. The DLC includes new courses, pins for improving golfer performance and upgrading your created character. The good news is that playing Tiger Woods PGA Tour 14 earns you in-game coins that can be used to buy much of this DLC, if you have the patience.

We are coming up to the 18th hole of this review, so let's line up the final putt. Tiger Woods PGA Tour 14 is another fantastic entry in this constantly improving golf series. EA Tiburon's attention to detail and clear love for the game of golf is apparent through every single part of this experience. It is great fun for those of all skill levels - even those who are not big golf fans can enjoy this game without having to learn an extremely complicated control scheme. If you've played a Tiger Woods game in the past year or two, you do not need to rush out and buy this one. But if it's been a few years, now's the right time to jump back into the series. It's a relaxing, authentic experience that will appeal to all. 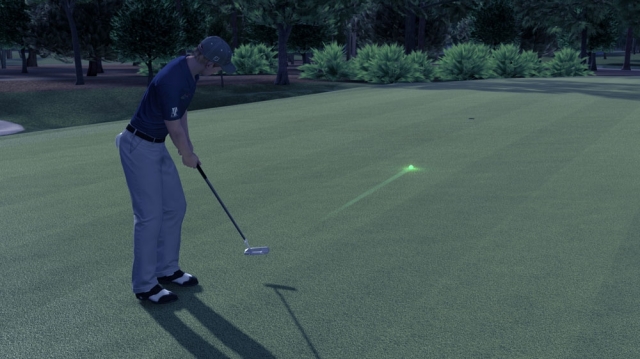 This review is based on a PlayStation 3 copy of Tiger Woods PGA Tour 14, provided by the publisher.