Strider Hiryu has been able to carve out some name recognition thanks to his appearances in the popular Marvel vs. Capcom fighting game series. But way back when, Strider Hiryu was the star of the eponymous series Strider, which debuted in arcades and found its way to consoles. Now, Double Helix has created a new Strider game, nearly fifteen years after the last one released, and it promises to birth a new generation of Strider fans. 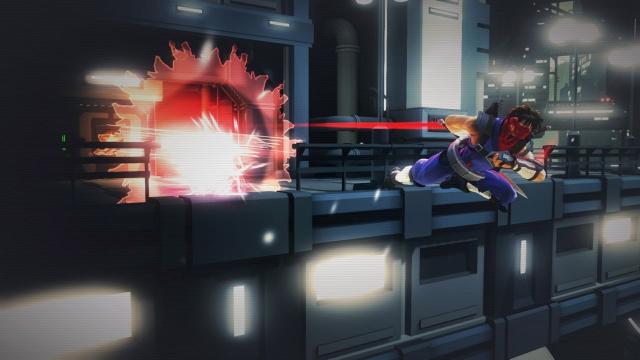 Grandmaster Meio has taken control over Kazakh City and rules it with an iron fist. The city's only hope is you, the new Strider. As a Strider, you possess lithe movement skills and exceptional combat abilities that allow you to lay waste to thousands of enemies as you seek to liberate Kazakh City. Strider starts out with a few basic slashing attacks, but as the game progresses he will pick up a variety of power-ups to improve his arsenal. Option powerups include summoning an eagle to dive bomb a foe and a droid to shield you from enemy attacks. Other powerups called cyphers include changing the elemental attack and features of your main sword strikes, with plasma and freezing cold ice among them. Some powerups are inspired by previous Strider games, which should make long-time series fans happy.

Graphically, Strider looks very nice. Each version of the game portrays Double Helix's intended graphical style, with the PS4, Xbox One and PC versions achieving 1080p and 60 FPS (the PS3 and 360 are limited to 720p and 30 FPS). However, it's not the most enjoyable art style, as most environments look similar to each other, and there's a bit too much gray here for my liking (your mileage may vary). There is also an overuse of bright lighting at certain points, which becomes distracting when trying to keep track of enemies and where off-screen lasers are firing from. Additionally, most of the game takes place in Kazakh City and many of the rooms feel identical. A change-up in environments or room patterns would have been appreciated here. 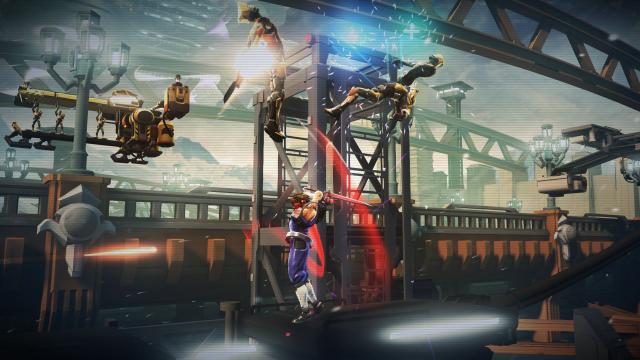 Past Strider titles have been arcade games with very short campaigns that challenged players to set a new high score. This incarnation of Strider takes a very different approach, dropping the score system and opting for a longer, Metroidvania style game. Players will be moving back and forth across the map, defeating enemies and bosses, acquiring powerups and health upgrades and occasionally backtracking to open new doors with acquired cypher powers; it works quite well, though one side effect of the gameplay change is that it becomes easier (though I'd say less fun) to avoid the enemies and dash through most rooms. On the other hand, bosses can either be very easy or downright difficult to defeat. Some bosses can be taken down without much challenge while other bosses will do a ton of damage to you fairly quickly and cause a lot of frustration. Challenge seekers will look forward to taking down these tough bosses.

Three difficulty options exist for the campaign: Easy, Normal and Hard. Normal mode will suffice for most gamers, while those who find the hack and slashing of Normal to be too easy can tackle the Hard mode. Two other unlockable modes are also available. Beacon run requires players to run through the level along a specified path while dealing with enemies and environmental traps along the way. Survival challenges give players a specific set of cyphers and powers and task the player with surviving as many waves of enemies as they possibly can. Both modes add new ways of playing the game and actually can hold your interest more than the campaign, which drags on a bit at times through its ~5-6 hour playthrough (with a few more hours for completionists to nab all the collectibles). All three modes combine to provide excellent value for the game's small $15 price tag - bang for the buck is not a concern with Strider. 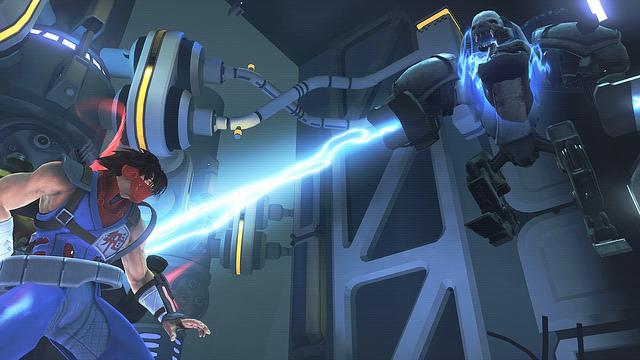 We haven't seen a new Strider game in over a decade, so it's good to see Double Helix bring the master ninja back in Strider. Although the game has some faults and the environments and graphics feel mundane, hacking, slashing, and overpowering foes feels great, like controlling a powerful ninja should. This is a solid return for the Strider series and I look forward to seeing how it evolves from this point on.

This review is based on a digital copy of Strider for the PS4, provided by the publisher.