Dead Island 2 is More than Just a Trailer - Preview

Dead Island 2’s silly, tongue in cheek trailer engaged audiences at the Sony press conference, but it was distinctly lacking in gameplay. Knowing how great the first game’s trailer was, only to give way to a much more divided reception to the game itself, I was skeptical of this new title. At E3, I got to see a gameplay demonstration from Deep Silver representatives for Dead Island 2 and what I saw was impressive.

Dead Island 2 takes place in a California infected by the zombie virus that was prevalent in the first title. California has been separated from the rest of the US due to this, effectively making the state an island. Deep Silver describes the experience as “paradise meets hell”, encouraging players to “enjoy the slaughter” and “embrace the apocalypse”.

Four new types of characters were mentioned: the hunter, berserker, speeder, and bishop. We were also introduced to Max - the truck driver who assists the main character - and his cat Rick (Deep Silver claims that this the first game to ever motion capture a cat). Human factions will also make a more concerted appearance this time.

Players can dual wield weapons for the first time, and weapons can now be modified without the use of a work bench. Also new to the series are motorized weapons, powerful tools like the weed trimmer and power drill. They do tons of damage to zombies, but are very loud (thus attracting zombies to you) and use up precious fuel. 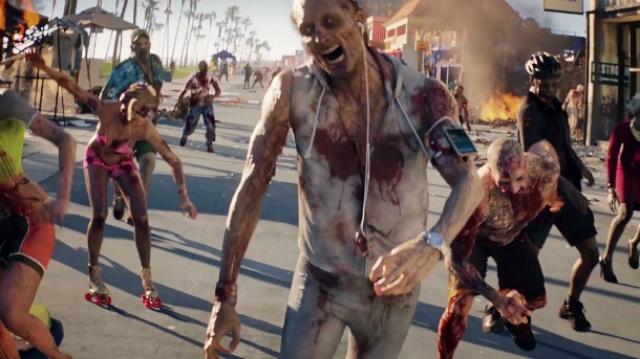 Deep Silver noted that there will be up to 8 players in Dead Island 2’s multiplayer mode. Players can either cooperate with each other to complete goals or compete against each other, impeding their progress.

During the gameplay demo, the visceral, bloody killings of zombies were very satisfying, as powerful melee weapons chopped heads off left and right. At one point, human raiders attacked, showing the danger that humans add to the game. Our presenter used this chance to show off the new dynamic environments, as objects were affected by the ensuing firefight. He also showed that certain pieces of ammunition could be picked up after use and be re-used, such as arrows and thrown melee weapons.

The demo took us through a wedding reception, with the many wedding guests now turned into zombies. This section culminated in a battle with The Thug, an overweight zombie wearing a Los Angeles Lakers jersey. This zombie took many hits to take down but eventually succumbed to the constant onslaught of human weaponry.

Dead Island 2 is shaping up to be a fun take on the zombie apocalypse mythos and will release on PS4, Xbox One and PC in Spring 2015.