One Piece is back again with another video game adaptation. The immensely popular manga/anime series just had Romance Dawn wash up on our shores earlier this year, but there's no rest for pirates! One Piece: Unlimited World Red is the latest game in the Unlimited sub-series of One Piece games and is the first North America has seen since 2008's Unlimited Adventure for Wii. So let's set sail, into the Sea of Review! 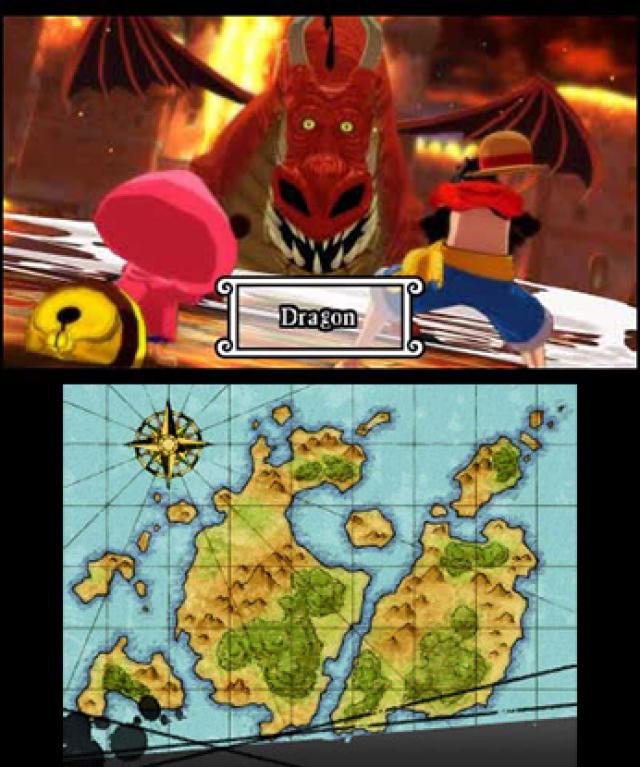 Unlimited World Red has two single player modes. The Main Story is, unsurprisingly, the main story mode of the game. The campaign's primary antagonist is Patrick Redfield, a powerful pirate also known as "Red the Aloof" who escaped from pirate prison when the Straw Hat crew attacked the marines at the Battle of Marineford. During the campaign, Redfield projects the crew's memories onto the world, which leads to the crew fighting many enemies from past arcs of the series. This serves as a way for One Piece fans to relive the battles from the manga, as many manga/anime based games have done before. Up to three of the nine playable Straw Hat crew members (Luffy, Zoro, Sanji, Nami, Usopp, Chopper, Robin, Franky, Brook) can be chosen for each level, though all nine will have dialogue and cutscene appearances regardless of your party selection.

The combat system is simple, but engaging. Each character's has two attack buttons (Y/X on 3DS/Wii U, Square/Triangle on PS3/Vita). Repeatedly tapping these buttons in different combinations will change which attacks are used. Tapping Y or X once creates an attack, tapping twice launches another attack, tapping Y and X is another attack, and so on. Jumping before attacking opens up more attack possibilities. There is also an action button which will display during each battle that allows you to dodge, guard or counter incoming attacks. Failure to push the action button when it appears will result in damage taken. The action button is not a catch-all to avoiding damage, however, because some attacks come in too quickly, from too many directions, or are just too powerful to be avoided. For those attacks, it's important to get out of the way when you see them coming and try not to get locked into an attack combo.

Characters also have special attacks, which take up either one or both SP bars. SP is gained throughout battles by landing attacks on enemies. The special attacks include signature moves that the characters have used in prior manga appearances. There is also a team attack where all three members of the party team up to deal major damage to the targeted foe. 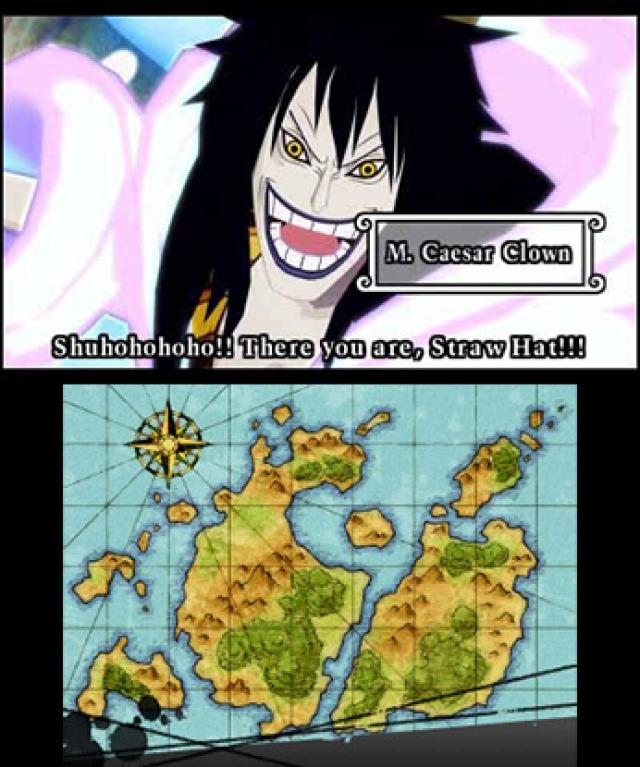 Battling isn't the only thing that can be done while traversing each world. Breaking boxes, destroying plants and other environmental pieces often yields spoils. These spoils can be brought back to town to craft new items, strengthen current items, and expand the town. You can also catch bugs and animals using the insect net or catch fish with a fishing rod. These two games start up quick button-pressing mini-games where you must push the correct button at the proper time to tire out the animal you've just caught. It's a decent change of pace when the fighting becomes mundane.

There are also passive and active abilities that can be equipped by each character, called "Words". Custom words are phrases spoken by each of the characters and can passively boost stats such as HP, Attack, and resistances. They also affect success rates in fishing and bug catching. Item words can be used the same way as items in battle, which can boost teammates or heal them. Overuse of words will cause the player to be locked out of them briefly, so you can't use them constantly.

When you're not fighting minions and taking down One Piece luminaries, you can explore the overworld as main character Luffy. The straw hat wearing pirate has the ability to stretch his body parts like rubber, which enables him to launch his arms at the rooftops of buildings and various other high places. Using this ability, Luffy can quickly traverse the entire island, rooftop to rooftop. It's no Assassin's Creed, but rocketing around the island with Luffy's rubber arms is fun. Talking to the townsfolk will grant you new additions that can be built in town. You can then build these expansions with the spoils you have collected from your adventures. There are also quests that can be taken in town. These quests often involve collecting various items or defeating a specific opponent. 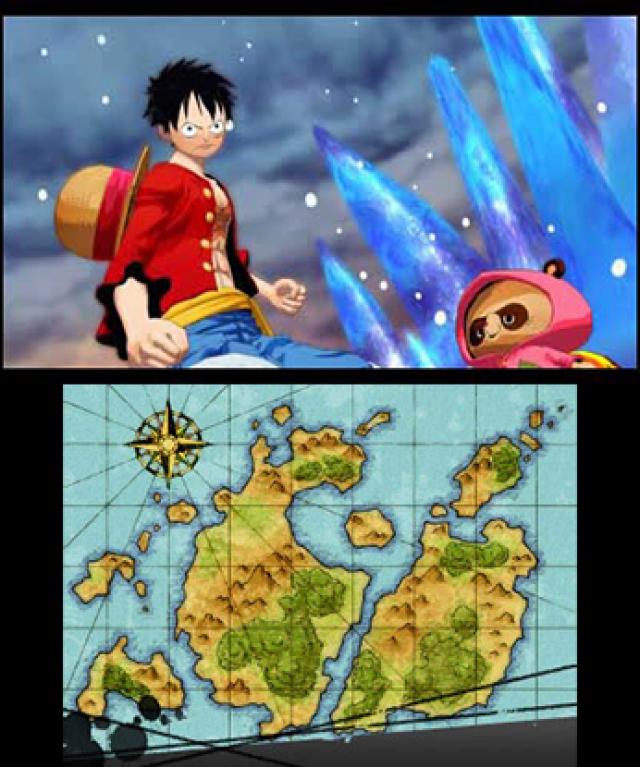 There is an emphasis on building up your town and crafting your spoils into new items. However, if that's not something that tickles your fancy, the main campaign might come across as a bore. Each level contains multiple small areas with rather simple level design, with nothing very intriguing to offer. There are some side paths that can be accessed by specific characters and other paths that contain more spoils, but the cramped nature of the levels limits the desire to explore and shepherds you into the next fight. One Piece is a series that romanticizes exploration and new discovery, but Unlimited World Red unfortunately fails to cater to those seeking adventure.

Coliseum mode is the other single player mode. It takes place during the series' current Dressrosa arc at the city's coliseum. Luffy must make his way to the top of the competition to get a chance at taking down the big boss, the flamboyantly colorful Doflamingo. At the start, you'll only have access to Luffy and the pirate warlord Trafalgar Law, but other characters will be unlocked as you win fights. There are twenty characters in total (the nine Straw Hat pirates, Law, Fujitora, Ace, Crocodile, Boa Hancock, Buggy, Whitebeard, Jinbei, Shanks, Akainu, and Doflamingo), covering a wide swath of the enormous One Piece saga. There are multiple types of battle on offer, such as a battle with one or two tough foes and a battle royale against a throng of smaller mooks. There are also special battles that appear at various times. These battles pit familiar opponents against each other and will offer more ranking points than a typical fight.

Cutting out the adventure mechanics would seem to make Coliseum mode a weaker offering, but I'd argue it's for the better. Without that fluff, Coliseum puts the game's strength - combat - on full display and lets you get into the action right away, without a need to traverse from point A to point B. You get all of the action and none of the mostly lifeless worlds that the main campaign forces upon you. 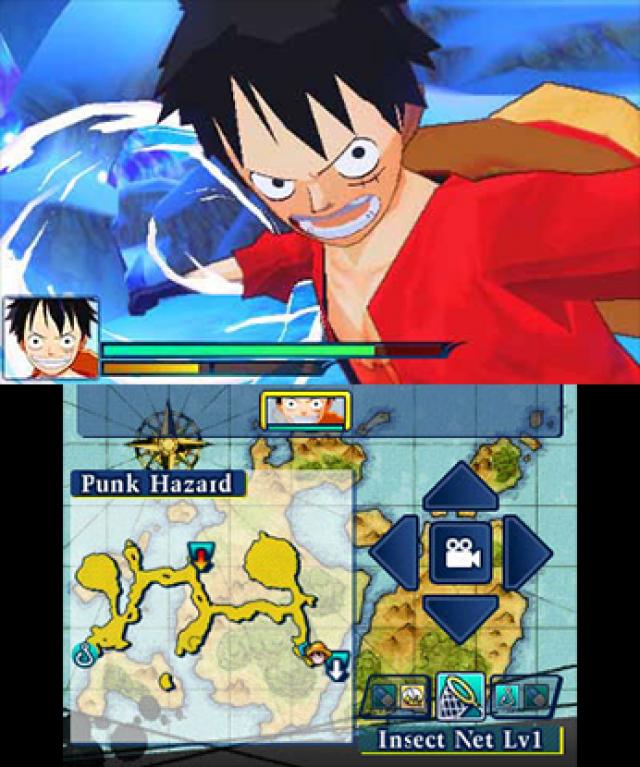 Your time spent with One Piece: Unlimited World Red will vary depending on how invested you get into building up the town and crafting new items. The main campaign can be finished in about 7-10 hours, which sounds short, but it ends up being just enough time to finish things up just as the game begins to feel like it's dragging on. A more difficult version of the campaign becomes available after beating it. The Coliseum will keep you occupied about as long, but the engaging fighting mechanics and lack of filler mook fights in-between climatic clashes highlight the game's strength and will encourage you to play on for longer.

Which system you get One Piece: Unlimited World Red for may be dependent on several factors. In America, the 3DS version comes in at the cheapest price - $30 - but of course trades off with less graphical fidelity and the lack of a second analog stick for camera control. It does have the benefit of having the map on the bottom screen, while with other versions you must pause the game to view the map. The Vita version is next up at $40. The PS3 and Wii U versions bring the game into HD but also come with a $50 price tag. The Wii U version is digital-only in North America, the others are both physical and digital. The 3DS and Vita versions have local four-player multiplayer, while the PS3 and Wii U only have split-screen two-player multiplayer. None of the versions feature any online play, which is disappointing but not surprising.

One Piece: Unlimited World Red is a much better offering than this year's Romance Dawn and should please all series fans. While its adventure mode is lacking, its Coliseum mode highlights the great fun of battle that is a staple of the series. Anyone with even a passing interest in beating down foes with extraordinary pirate powers should give this game a look.

This review is based on a retail copy of One Piece: Unlimited World Red for the 3DS