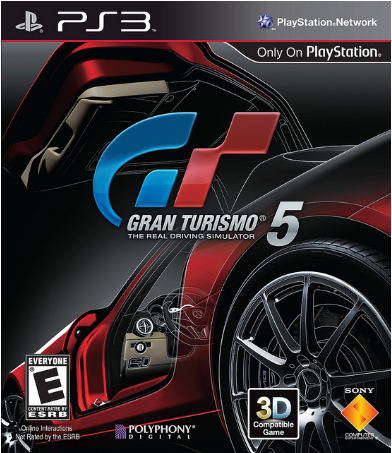 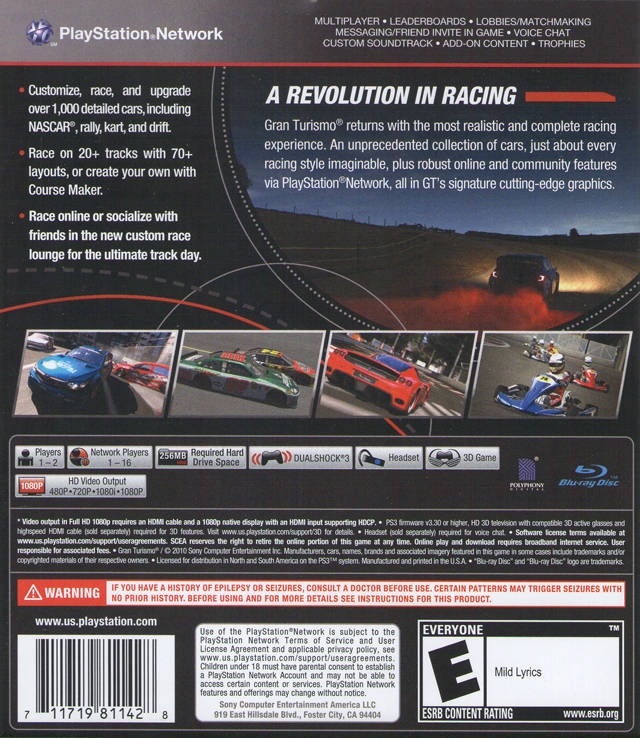 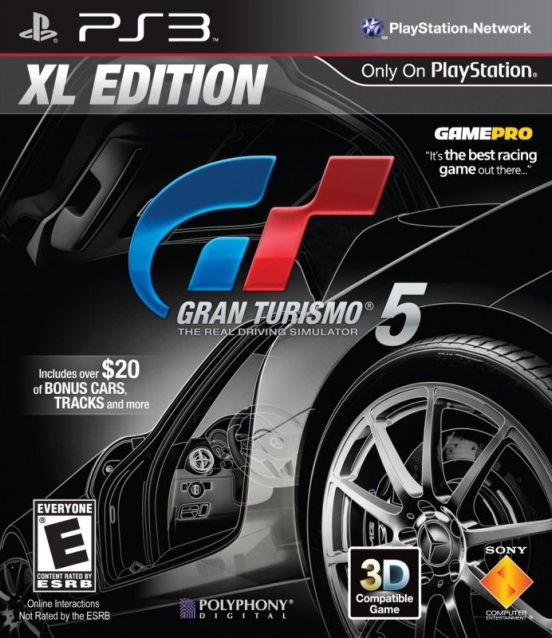 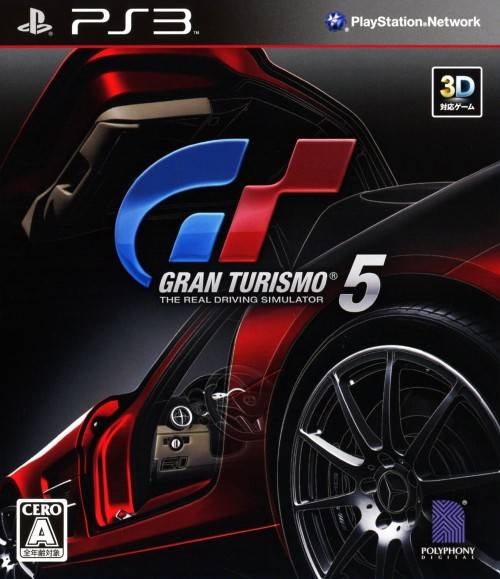 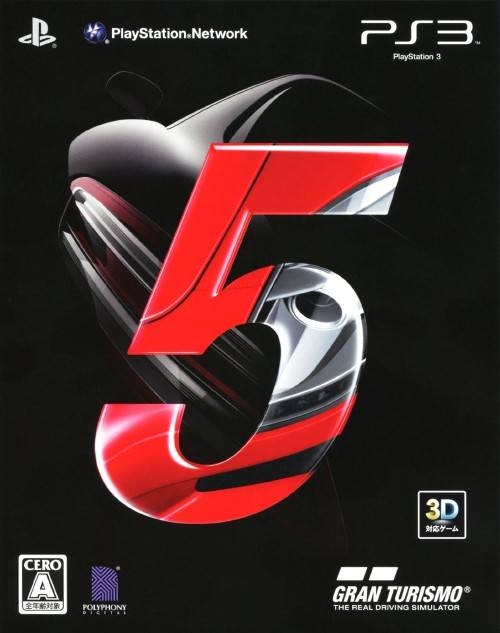 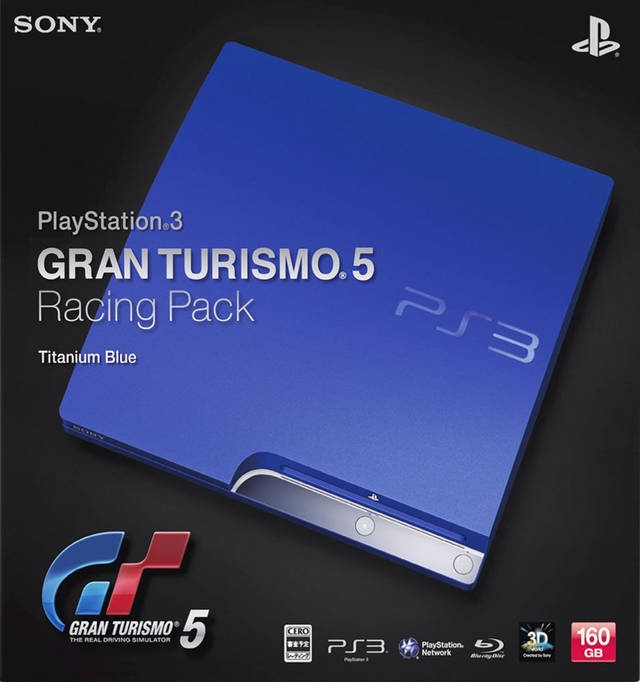 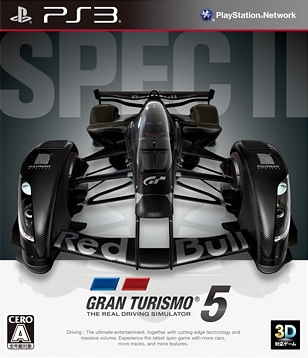 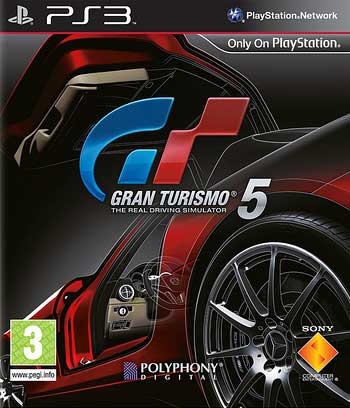 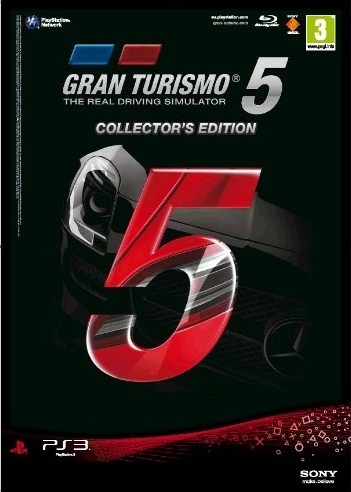 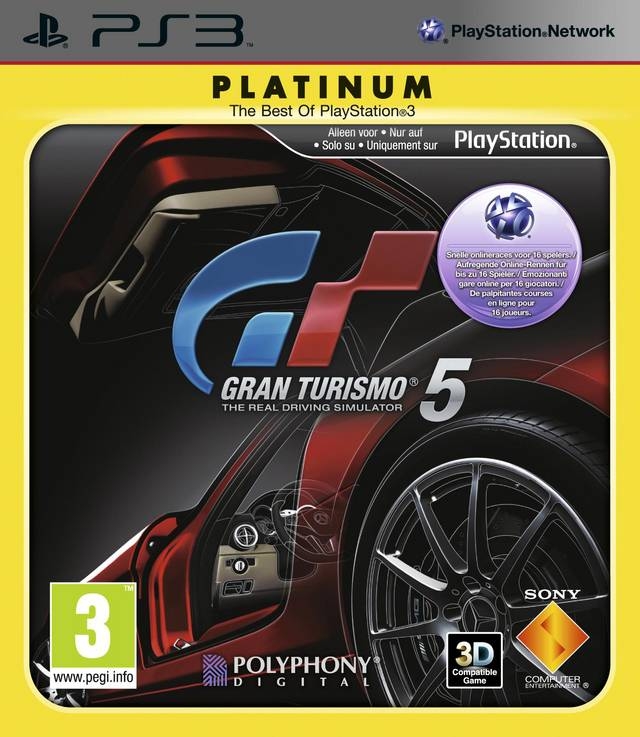 Gran Turismo 5 is a massive game. This first full installment of the franchise to land on the PS3 promised numerous new features and improvements to Sony’s premier racing series. Many years have passed since the last game and in that time racing games have innovated in numerous ways, some of which Polyphony Digital has not quite grasped. Because of this, it’s not the Godsend some fans hoped for, but it is another strong entry into this beloved franchise.

When I say everything about Gran Turismo 5 is massive, I mean everything, including the load times. That may seem like a cheap shot but they are unbelievably lengthy and the most glaring issue with the game from a technical standpoint. Of course, players have the option to install data on the hard drive to reduce load times but this process is ridiculously long in itself. I was able to race around the Nuremberg track several times with my copy of Gran Turismo PSP and make a sandwich before the install completed. Even then the load times seemed excessive but thankfully seemed to improve the more I played.

Once you navigate the loading hurdles you can properly experience this beautiful game Polyphony Digital spent so many years developing. The introductory video delivers an inspired behind the scenes look at car production and properly orients you to this digital wonderland for car lovers. The main menu displays several options, including GT Mode, GT Arcade, GT TV, and Course Maker. At first glance, the menu system seems simple and elegant, in line with the presentation gamers have come to expect from the series. However, the menus are actually cumbersome to navigate at times thanks to the varying shapes of the selection items. This becomes more of a problem with the online component than it is with the offline single player. GT Mode is where most of the action takes place. As always, you pick your first ride from a list of budget cars; not exactly what comes to mind in the high-octane world of automotive racing. Veterans should be familiar with the progression from low to high-end whips, which can be tedious but ultimately rewarding. A leveling system based on experience points earned through racing and completing events streamlines the pace at which you unlock just about everything worth doing in Gran Turismo 5, including special events, license tests, and strangely enough even damage modeling.

There are two options for purchasing new cars: either buying directly from the dealerships or the used car lot. The menu layout for used cars is unnecessarily cluttered and a strain on the eyes to look at, very different from the elegant showcase for new cars. It is important to take note of history and mileage on used vehicles. In the beginning, when making your way through the A-Spec events, having the best tuned and most powerful vehicle is more important to winning than racing skill.

Tuning options remain mostly the same from the last game except for the conspicuous absence of the ability to modify brakes. Deciding which parts of your car to upgrade within the confines of your budget and then seeing the results of those changes on the raceway is as satisfying as always. Nevertheless, the customization options that seemed so in-depth and limitless once upon a time now pale in comparison to the sheer amount of customization options offered by other modern racers. You can only choose from solid one-color paint jobs for the body or wheels, with none of the stylistic bells and whistles available in games such as Need for Speed or Forza Motorsport.

In terms of racing physics and simulation, Gran Turismo still outraces the competition. The Dualshock 3 works well for control but for the most authentic experience you need a quality racing wheel setup. More than the AI, you are really battling against the braking zones found on the wide and eclectic array of courses. Nothing quite matches the escalating tension of trying to brake at top speed in your newly supercharged car and maintain your position (or at the very least not crash into the wall), except maybe doing so on a rain slicked raceway. The sense of speed is impeccable. You can feel the difference a finely tuned engine makes and this is just one of the factors that further immerses you in this automotive dreamland. A-Spec races remain in the tradition of Gran Turismo games past. Event requirements can vary from the type, make, model, and year of vehicles. Races can consist of up to 16 competitors with decent but not exceptionally smart AI opponents. It does not feel as though they respond authentically to your maneuvers on the course and you had better believe the game still suffers from the bumper car feel of past games.

B-Spec mode puts you in the role of a team director in charge of your own team of AI drivers. Here you will manage racers from afar, helping them win through conditioning their skill and stamina. While this mode is unique and has some niche appeal, it is not overly captivating thanks to its plodding pace with no option to accelerate the proceedings.

Not satisfied unless it represents as many areas of the sport as possible, Gran Turismo 5 is packed with a bevy of Special Events that bring new ways to race and drive. These events include Kart Racing, far from the pick up and play style of kart racing found in Mario Kart, here you get a real sense of speed accompanied by the at times punishingly realistic physics of Gran Turismo. Among many other events, you can learn the ins and outs of racing from the Top Gear crew and the ways of NASCAR from Jeff Gordon’s likeness.

Gran Turismo 5 is the series' first serious foray into the online space. Expanding on the features teased in Gran Turismo 5 Prologue, the PlayStation Network support has panned out nicely. You can customize your profile and private racing room called My Lounge. My Lounge is where you can create custom races for up to 16 participants, specify the track, vehicle type, number of laps and even penalize false starts. While waiting for a race to begin you can do a free run around the track and communicate via text or headset. After the race, you can save the replay and even take snapshots of the action. The same options are available in an open lobby where anyone can join. The community features are sufficient and integrated nicely with the offline mode. You can at anytime look at your friend profiles, send messages, and even exchange gifts. The system is only muddled by the archaic menu system. At over 1,000 cars to choose from the vehicle roster is unprecedented. The autos are divided into standard and premium models. Premium cars are usually the higher end and rare vehicles, of which there are about 200. These cars feature a photorealistic in-car view of the dashboard and more realistic damage modeling. Games equipped with a PS Eye can use the head-tracking feature to adjust their view from the interior of the car while racing. To get an idea of just how beautiful these premium automotives are take a stab at the Photo Mode, which allows you to snap pictures of your car in exotic locales then save and share them at your leisure.

It is hard to imagine how the excellent visuals of the premium cars can in anyway be construed as a bad thing but they in fact highlight how dull the rest of the cars look in comparison. The texture work is spotty and the damage rendering on these cars noticeably less sophisticated. Thankfully, Polyphony promises to deliver regular performance patches to smooth out the rough edges.

Gamers expected Gran Turismo 5 to deliver top-notch visuals, and for the most part it does, though it falters in some respects. The frame rate drops from time to time and dust particles look unconvincing. The character models look good for a game mostly populated by cars, although something about Jeff Gordon’s character model’s eyes lead me to believe he wants to feast on my soul. The racing courses are visually stunning, though some more so than others because of the nature of their layout. Yes, the trees are still 2D. The new dynamic weather and day/night transitions look great; many times I found myself taking my fastest car out for practice runs just to marvel at the look. This entire visual spectacle is available in 3D. The sound design is just okay. You can tell when cars sound alike that clearly should not. The voice acting of the real life racing personalities that lend their services to the game get the job done as they deliver valuable tips and advice. Personally, I am a fan of the inspired selections that make up the soundtrack consisting of the usual smooth jazz, classical, and riff heavy rock tunes. If you take a step back and appreciate the songs for what they are, you will realize they make for good driving music. Of course, there is no reason to listen to these tunes when you have the ability to upload your own, so do so promptly.

Grand Turismo 5 has plenty in the way of content and things to do. In addition to the extensive roster of cars and courses to race, the game delivers a digital encyclopedia of automotive knowledge. GT TV provides free and purchasable content to keep you in tune with the latest events in the world of motorcars. Each individual car featured in the game has its own information summary providing insight into its history and on-road (or off-road in the case of rally cars) performance. Regular content updates including seasonal events promise to expand the experience in new and exciting ways. The creators’ passion for cars is undeniable and permeates every corner of the simulator.

As a package, Gran Turismo 5 will appeal to the racing fanatics who revel in every facet of the sport. More than a game, or a simulator, it is a hobby requiring hours of dedication to get the most out of the meticulously constructed experience. Is it the most dominant game on the market when it comes to racing or customization? Probably not as those titles are contested for by GRID and Forza respectively. However, Gran Turismo 5 more than holds its own in those areas while being the undisputed king of physics and value of any racer currently available on consoles. Gran Turismo’s legions of fans around the world are rewarded for their patience with an unforgettable experience that will undoubtedly last for years to come.