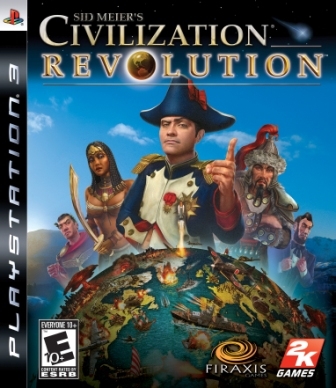 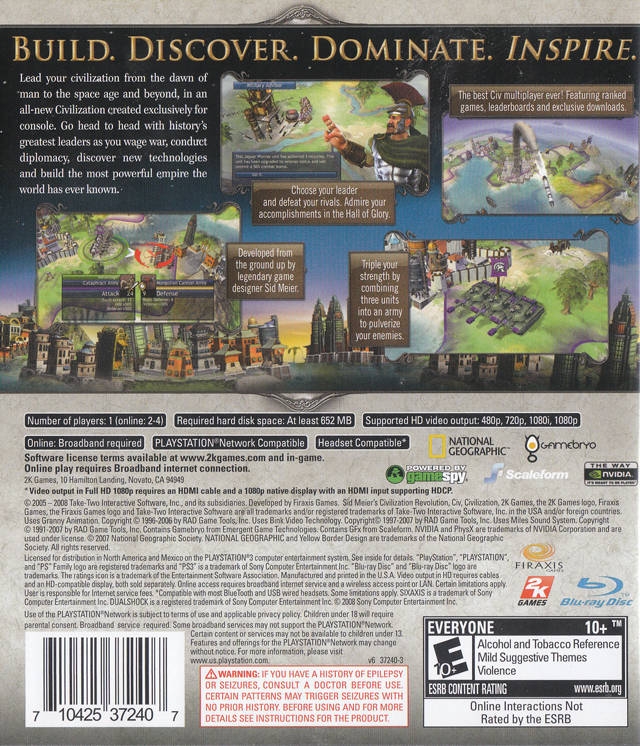 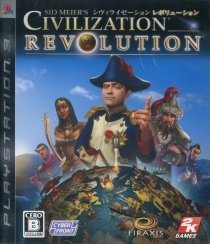 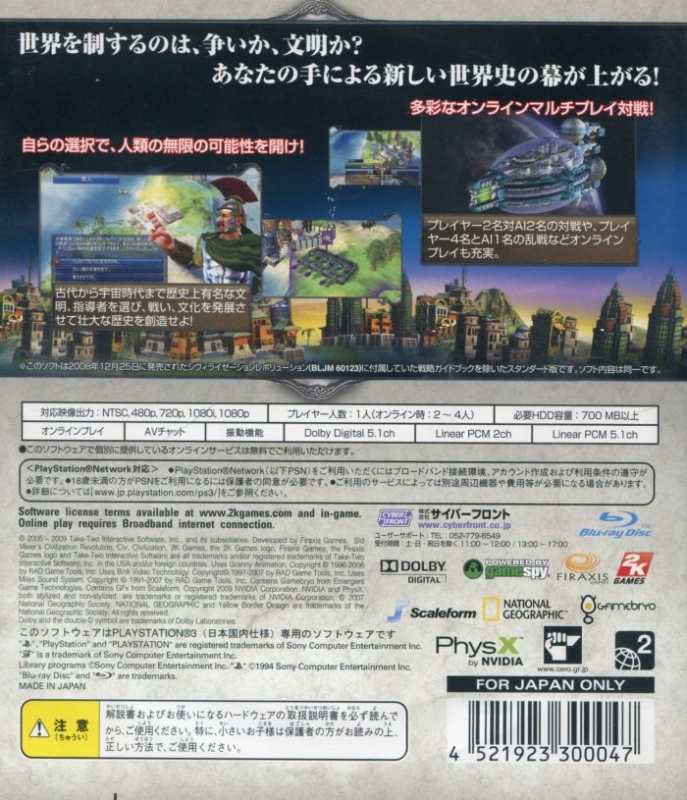 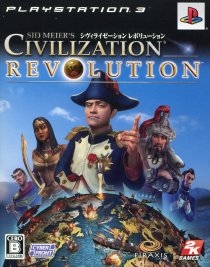 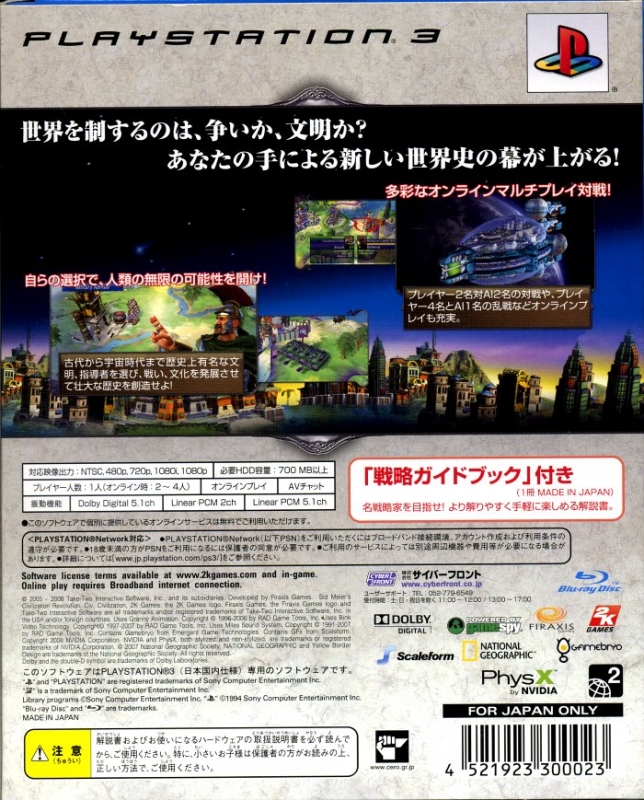 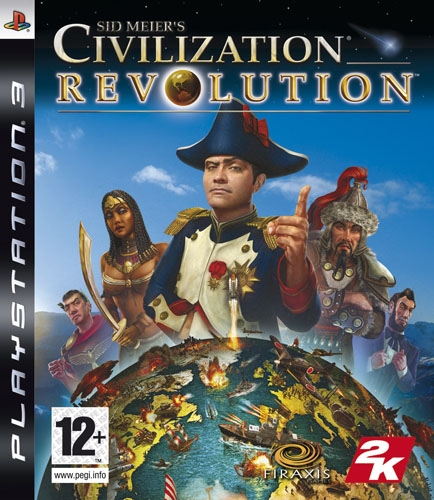 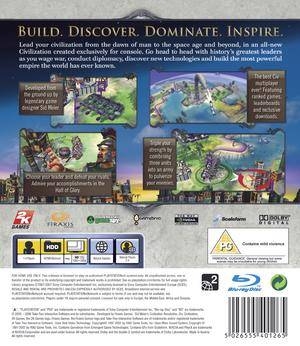 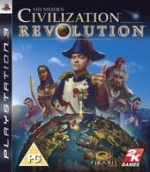 Anyone familiar with Sid Meier’s long running civilization series will be undoubtedly skeptical at the notion of Civilization being removed from its secure and safe home, the PC, and thrown into the cold, frightening unknown of home consoles. For those who aren’t familiar with the series however, let’s introduce the basics: Civilization Revolution is a turn-based strategy game developed by Firaxis and published by 2K Games, allowing you to assume the role of 1 of 16 famous world leaders, ranging from Ghandi to Abraham Lincoln. Each nation has unique skill sets, troops and starting bonuses to give you a varied choice when deciding which country you want to lead to glory.

After selecting your nation and difficulty level, ranging from “Chieftain” to “Deity”, you’re ready to go. You begin with a settlers unit in a randomly generated environment, designed to give each nation a fair starting point. I feel like I have to interrupt myself here because visually, Revolution breaks away from the original Civilization games as players are presented with a brighter, more casual veneer which succeeds in drawing in the less ‘hardcore’ amongst us. The landscape, characters, troops and cities are designed intricately and are fairly detailed. Combat is presented in a fluid and highly animated fashion, with troops celebrating their victory by raising their swords or guns to the sky and cheering wildly. It can however get slightly, for lack of a better word, muddled, as air to air combat in particular descends into a mess of flying planes, often leaving you mid-battle wondering who exactly is winning. Combat between troops is numbers based, though invisible probability tests seem to play a major part in the final result. Regardless, it’s clear to see that Firaxis have put a lot of effort into creating a world that looks and feels more accessible, and they’ve succeeded comfortably. The presentation isn’t without issues however; combat can sometimes ‘lock’ for a few seconds leaving troops unmoving before disappearing as though destroyed and later on in the game, as the number of troops and cities under your command increases you’ll unfortunately, though only occasionally experience quite severe drops in frame rate, so much so that the game will sometimes stop for a few seconds while generating your city screen or your advisers. It’s disappointing, but only a minor detraction from an otherwise pleasant technical experience.

As you can see, the world is presented in a rich, vibrant fashion.

After settling your first city, you’re presented with the city screen for the first time. Gone is the cumbersome micromanagement of your workers, replaced by a uncomplicated system that allows players to focus the efforts of their workers easily by selecting from a list of options ranging from “food” to “gold”, while still giving you the option to select each worker and set them to a particular ‘tile’ around the city if you desire. Many of the recognized Civilization staples are included and form the basis of the gaming experience; from the technology tree that allows you to research anything from the Alphabet to Spaceflight to the “wonders” you can build in any of your cities. The wonders have always been one of my favourite inclusions to the civilization experience, and this experience is just as endearing in Revolution. With improved animations showing the finished wonders up close, it really does bring to life the notion of constructing the Great Pyramid’s in the middle of Newcastle, or Shakespeare’s Theatre in Denver. Obviously the wonders aren’t for purely aesthetic purposes; some allow for technologies to be discovered or foresee military disasters and are vital in achieving victory and maintaining your nation.

The game is split between 4 different time periods, starting in the Ancient period in 4000BC, all the way to the modern period, ending in 2100AD (if no civilization has achieved victory before then). Depending on the era you’re currently playing in, each turn takes a different amount of time for a streamlined experience. This ultimately means that games are much shorter than what Civ players may be used to, sometimes as quick as 2-3 hours, but it certainly adds to the “pick up and play” attraction of the game.  You are clearly notified when you are advancing into a new era and also reminded what benefits your particular nation receives in this period; even your advisors will change attire and appearance to reflect the new time frame. Small touches such as these really do add to the Civilization experience.

There are 4 different ways in which you can achieve the big “W”, a cultural victory achieved by making ‘great people’ such as Einstein or Plato appear in one of your cities, converting enemy cities to your nation due to your heightened culture, and building wonders . The great people can be used to assist your nation in many ways, from quickly adding a cash lump sum to your treasury to being permanently settled in a city to increase your gold or population output, for example. Secondly, you’ve got an economic path to victory, obviously achieved by reaching a certain amount of gold but with the added requirement that you build the World Bank; I generally play as America if I want to achieve this just for historical accuracy, it must be said I’m a bit sad like that.  (We’ll ignore the fact that through the course of my conquests I generally acquire Zimbabwe or Mecca, thus destroying any accuracy I hoped to retain. Can’t have it all I suppose.)

Third, there is the triumphant return of an old civilization favourite, the space race, giving you the chance to be the first nation to construct a space station capable of reaching Alpha Centauri. However, none of these are quite as desirable as our final method of victory; Domination. Capture and control through force every enemy capital and you shall be declared the ruler of the world. What else could anyone ask for? Despite my predilection toward the domination path to victory, each one is as accessible as the next which grants the player practically unlimited freedom during the course of their play. However, all of what I’ve explained would ultimately be pointless if the core Civilization experience hadn’t been kept intact. Fortunately, Firaxis has succeeded in doing what many would have believed impossible by providing the fundamental elements that made Civilization one of the most popular strategy games of all time glossed over with a simplified, friendly finish.

Certain key points have been excluded in order to make the game more user-friendly, such as the ability to edit and change the world map before you begin, as well as being able to automatically assign build items in cities resulting in the need to trail through each city later on in the game selecting a particular building or troop to construct. By removing the ability to change or design the world map as you would like, some players may find that after a few games the randomly generated maps are too similar to each other creating a repitive experience though I have to say I haven't felt like that after a fair amount of playthroughs.
Nonetheless, despite these omissions, it still works. While things have been excluded as mentioned, other areas have been improved. The ‘civilopedia’ has, like the majority of the game, been streamlined; now incorporating videos and pictures to make it more interactive for the players while providing historical information. 3 units can now combine into an ‘army’, providing a much stronger unit to assist your quest for domination. Combat also yields upgrades, from a simple +50% to the attack of that unit to more unique bonuses, such as increased power when attacking cities and the ability to move an extra tile each turn.

The audio portion of the game is solid but never really goes beyond that. Each unit is given a unique noise for movement and attacks, and while the absence of background music is questionable, the gentle washing of waves and grunts of your troops will make up for the lack of an ever-present soundtrack. The only criticism I have is the ridiculous ‘sim-like’ voices of your advisors and enemy leaders; at first it’s just a minor twinge in the back of your mind but during the course of your early attempts at world leadership you’ll wish you had some form of virtual gun to shut them up. Thankfully, this is provided in the form of a volume scale in the options menu. Now, no review of Civilization Revolution would be complete without an in depth look into its multiplayer offerings. While you’re sadly not given the chance for a local multiplayer game, there is a robust online feature. There are various game choices available ranging from simple head-to-head matches to full 4 player free-for-all's; but does it work well?

There have been many problems with the multiplayer portion of Civilization games in the past, specifically with players dropping out of games mid-play, leaving an uncontrolled nation, or players taking too long to decide what they wanted to do with their cities, resulting in turns lasting a ridiculous amount of time. In Revolution, these issues have been resolved. If a human player drops out of the game, the control of their nation is assumed by an AI player, but they can also resume control at any time to get back into the action. Turn time is, at first, unlimited; the first player to finish their turn starts off a timer with around a minute and a half in which players must finish their turn also. It allows for a faster multiplayer experience free from unnecessary aggravations. Other interesting multiplayer features have been included, such as support for voice as well as video chat allowing you taunt your opponents as you crush their tiny spearman with your mighty legion army.

Finally, Firaxis have stated they are going to strongly support downloadable content for Revolution, in the form of downloadable scenarios as well as a “Game of the Week” option which allows players around the world to complete the same scenario and compete for a place on the leader board. It’s safe to say with these extended features Revolution will be well worth its price tag.

All in all, Civilization Revolution does exactly what Sid Meier and co. set out to achieve. Although some key components are missing, and the game is hampered by slight technical issues, the core civilization experience enjoyed by people for years remains for a much broader audience to enjoy. Despite the problems I encountered, I would definitely recommend this game to newcomers and veterans of the series alike who have jumped ship to the HD consoles. I have to give Sid Meier the praise he deserves; he has been able to achieve what many, including myself, would have deemed impossible.