Genre transitions can be a fun stepping stone most often afforded to flexible indie developers.  Stormind Games is one such example: setting aside the survival horror Remothered series for what's essentially a Diablo clone.  Replacing trepidation for empowerment is an alluring promise all of its own.  But for as much as I can appreciate the creative hazards in trying new things, this promised interplanetary adventure feels more and more ordinary by the end.

The shoes of our plucky teenage protagonist, Avril, are not easy ones to fill.  Earth has been stricken by a global cataclysm, killing billions as a result.  As Avril and her best friend, Mila, fire some annoying Marvel-esque snark while navigating a ravaged London, she happens upon a strange amulet.  Immediately after grasping it, two mysterious beings, Sun and Moon, gift her magical powers and whisk the pair away to another planet.  Her task is simple: acquire each planet's elemental essence in order to restore Earth to its former glory. 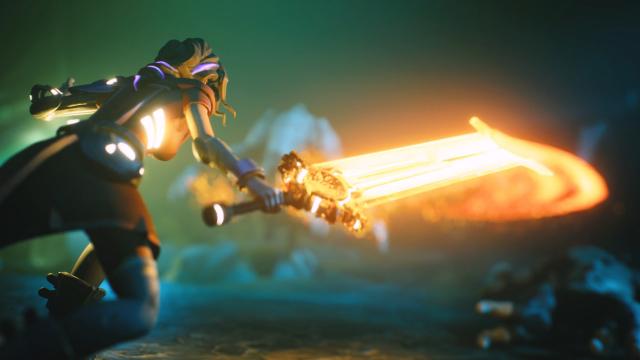 This newfound mantle as the Guardian of Balance requires Avril to grapple with two different states: Physical and Mental.  In the former, she dons an orange broadsword; in the latter, she becomes a mystical battle mage hurling purple energy balls.  These disparate polarities aren't just for neat aesthetic purposes.  Color-coded enemies take considerably more damage (base & critical) from the appropriate attack.  Likewise, you're tasked with balancing two distinct health bars all the while.  Take too many Physical or Mental strikes and it's game over altogether.

From the outset, it's easy to see this as "baby's first Diablo."  The top-down isometric viewpoint provides visual feedback of projected attacks from multiple angles, which comes in handy when many battles mix orange, purple, and both-colored combatants.  Since hot-swapping between states is instantaneous, it doesn't take long to gel with these mechanics.  Harrying several monsters at once, switching between berserker and magical maven all the while, quickly becomes second nature.  There's a similar principle with boss fights: drain one of their dual health bars during each phase and then quickly drain the other in their weakened state – failing to be quick resets that phase.

If that's the Diablo angle, what about the "baby's first" part?  There's really nothing beyond the rudimentary building blocks.  While you get a drip-feed of Physical/Mental secondary cooldown abilities, Avril sticks to the same main weapons from beginning to end.  The only real flavor beyond leveling up are Runes: tokens that fall into one of three color-coded categories.  Two of the three give fair buffs and debuffs, e.g. bump up your Physical critical damage by 5% in exchange for lower defense for your Mental side.  The rarest/costliest runes are Neutral ones that strictly provide bonuses.  The strictures with each of these is Avril can only have a certain amount of each kind depending on her available 'Rune Points,' which just strikes me as a needless extra step.  Why not just limit the total amount of Runes, across the world and with shopkeepers, instead of layering two competing qualifications?  It's funny too because everything else is so straightforward until Stormind decided "let's make this as sloppy as bureaucratic paperwork." 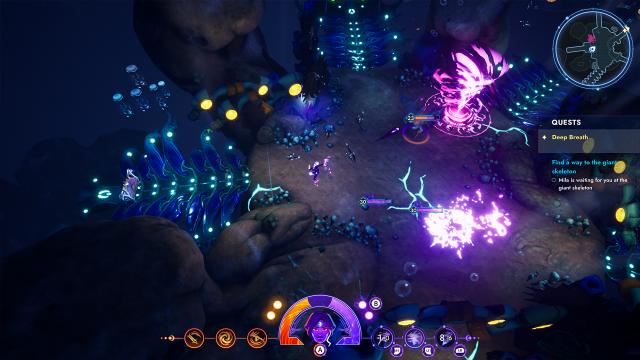 Despite the simplicity, Batora's combat doesn't feel as composed as it should.  While melee can still be fun, there isn't that level of palpable audio/visual feedback I'd expected.  I'm not one to diss repetitive cycles of attacking, rolling, and using cooldown abilities over and over, but there has to be a good amount of oomph! there as well; a vicious broadsword strike ought to feel cathartic.  Ranged attacks are enjoyable when you unlock more crowd-control abilities, but it's annoying in other regards.  Since the standard 'X' attack button is fidgety in targeting, I mostly kept to flicking the right analog stick in my preferred direction; but since shooting feels like Avril only fires in 8 locked directions instead of a smooth 360 degrees, you have to accommodate for its rigidity.  It's a subtle annoyance, but it's there.

There's also an odd bug that I triggered on rare occasion: Avril perpetually looking eastward after some post-battle dialogue.  So, she essentially keeps moonwalking if you go north, west, or south, and you need a loading screen to reset her stance.   That poses an issue when in Avril's Mental phase because now the game's actively wrestling with you over her next shot if you're used to flicking the control stick (quicker shots that way).  It also screws with your direction in her Physical state as well, since the analog stick is useful for directional sword lunges.

Beyond the mechanical pitfalls, level design leaves something to be desired.  Not aesthetically, mind you.  Whether navigating rocky terrain, scalding deserts, an underwater village, or whatever else, these are very pleasing biomes to roam through.  It's just a shame that those variegated environments are let down by a basic structure.  A lot of time is spent on a flat linear path with a couple of short detours for a random chest or minion encounter.  Moreover, some of the battle arenas when the invisible walls go up are arbitrarily miniscule.  You’ll feel packed like a sardine during some bouts, which is made more annoying when enemies use nasty ranged or AoE attacks. 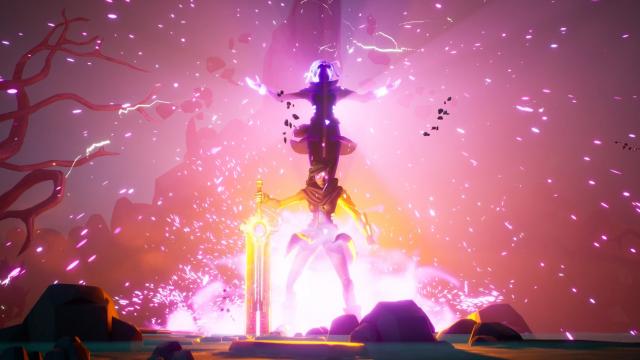 It feels weird to be dogging these mechanics so much when it's still capable of satisfying moments.  There's still the typical kinesthetic satisfaction of bigger and bigger damage numbers on screen, each boss feels unique from one another, and there's a satisfying dynamism in switching polarities too.  To break up the combat monotony, there are also puzzles that utilize Avril's dual natures.  Only about 25% of them are challenging, but their intent is more of a pacing mechanism than a hardcore Portal challenge room.  If Batora's overarching structure were presented on a flow chart, I'd fully believe Stormind nailed it with regards to tempo; unfortunately, the finer details are akin to sand grains in a gas tank, eventually enough of them ruin the engine.

Given this studio's pedigree, storytelling plays just as vital a role as its mechanics.  Which makes it all the more disappointing how uninvolved I was by the end.  There's a voluminous lore book filled with nonsense names for creatures and places, but it's hurled at you too fast to properly digest; my memory erased certain details once reaching the next planet where I was lore-dumped all over again.  There are several interesting dilemmas that'll discomfit Avril that she nonetheless has to decide, but I wish Stormind's writers didn't make her so annoying from the start.

As I referenced before, it's less about incorporating staid Marvel-branded quips in principle and more about their frequency and effect.  You probably couldn't internalize Avril and Mila's own tragic backstories by how they act in the beginning.  A type of weird disconnect often happens on-screen where Avril will wrestle with a genuinely tough decision, but then bounce back to default sass mode.  "Okay," Mila says over the radio, "so that mystical jerk thinks he can insult you without getting kicked in his... sorry... got a little carried away there.  You got this, Av!"  That's not verbatim what she says, but the point is you could believe that's something said by the finale. 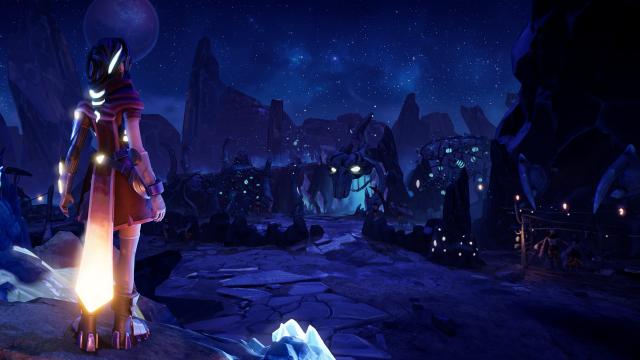 Similar to the gameplay, it's annoying how harsh I get towards the narrative.  If you pluck out the... "personality" carrying it, then you can see it as an adventurous – if somewhat banal – pulp serial.  I'm confident most players will catch on to how Sun and Moon inveigle Avril nonstop in order to save Earth.  It's about as subtle as David Cage's writing.  That said, I appreciate some of its other creative decisions: the Conqueror/Defender duality that's not strictly a Good/Evil karma system, a few enjoyable side characters, and some interesting scenarios.  Again, it has many hallmarks of a perfectly-acceptable template, but it simply doesn’t come together.

That poor mixture slightly dampens Batora's best quality: presentation.  There are several voice acting duds, but at least Ron Fish's soundtrack consistently captures an exciting energy that marries with each distinct planet.  Given the circumstances, just utilizing expected beats and successfully hitting them well is more than enough.  At the same time, the visuals impressively hit above their weight.  Think less about high-resolution textures and more about artistic creativity.  The way certain skyboxes are composed (also seen through its concept art in loading screens) tempts you to drink every world in. 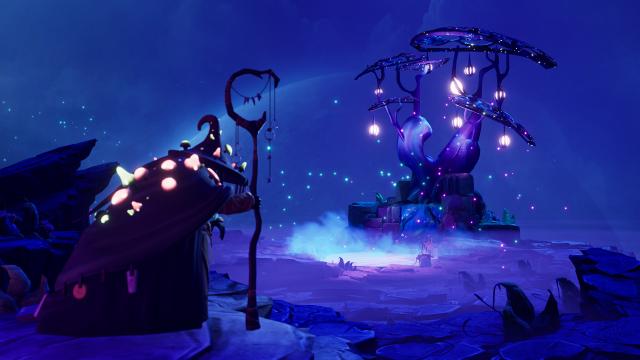 And this world to drink in can be yours for the low retail price of $24.99!  If you're strictly number-crunching, you're looking at roughly 6-7 hours (with little variation between players since it's incredibly linear).  There's also a New Game+ mode to tempt dedicated players, but it didn't do much for me as I got tired of the first run.  Although I will admit there's a slight interest in seeing what my other choices would've looked like.  Even if I just rely on YouTube, that's at least worth crediting.

Setting aside various nitpicks & critiques, Batora: Lost Haven's overarching issue is making Avril's extraordinary journey feel ordinary by the end.  Each world's vivid colors become more and more muted, the stakes less and less concerning, and the gameplay more and more repetitive.  From a distance, this seems like a perfectly adequate Diablo clone with an imaginative art style.  It has the storytelling bones for a fun sci-fi/fantasy pulp too.  But when you continuously mess up on the details, you get a game that's less than the sum of its parts.

This review is based on a digital copy of Batora: Lost Haven for the XS, provided by the publisher.