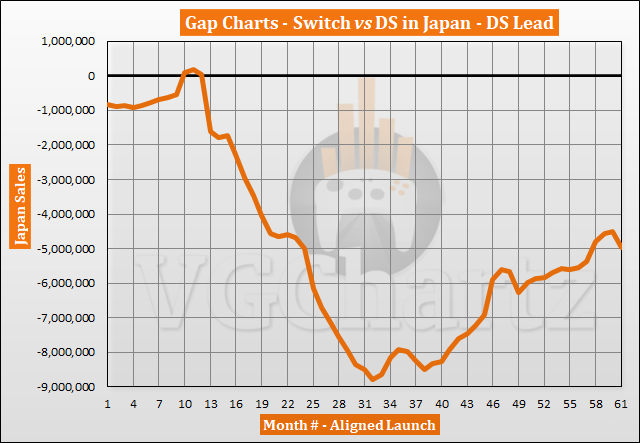 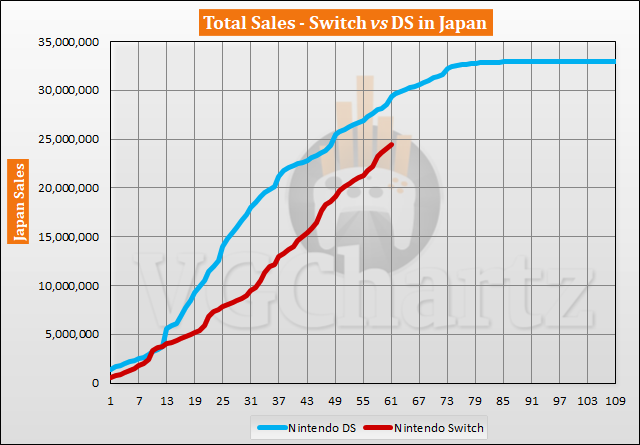 March 2022 is the 61st month that the Nintendo Switch has been available for in Japan. During the latest month, the DS has outsold the Switch by 455,494 units when you align the launches.

The 61st month for the Switch is March 2022, while for the DS it is December 2009. The Switch has sold 24.42 million units, while the DS sold 29.39 million units during the same timeframe. The DS sold current Switch sales in month 50.

Shouldnt the gap change in the latest month be a win for DS and not Switch?
And with December out of the way, Switch will now being to gain some ground again. Switch should outsell DS be mid-end of 2024.

You are right that should say DS. I'll go and fix the typo.

This is a new chart? I haven't seen Switch vs DS in japan before

February was the first time I did this chart. With the Switch about to outsell the 3DS in Japan, I figured I should replace it with this one.

Shouldnt the gap change in the latest month be a win for DS and not Switch?
And with December out of the way, Switch will now being to gain some ground again. Switch should outsell DS be mid-end of 2024.

Almost half of the current DS lead on Switch is from Japan. Looking at this chart and how Switch has been making quite a bit of ground, I'm more confident in Switch's ability to catch up with the DS in total sales provided Nintendo doesn't cannibalize their market by announcing/releasing Switch 2 in 2023.

With the shortages expected to continue into 2024 now I wouldn't expect to see a Switch '2' until March 2024 at the earliest. Plus we have yet to see a Switch price cut after over 5 years on the market. Well other than a small one in Europe last year.

I'm not sure if Nintendo is interested in giving the Switch a price cut at all, tbh. The shortage of chips is likely causing increased prices for manufacturing, which means less profit. Plus they have the 199 model already, albeit with reduced functions.

That is a good point. Even the PS4 only ever saw one price cut. Sony could have sold more PS4 consoles, but they decided to stick with profits over consoles sold.

Yep. Whether it's games or hardware, price cuts rarely increase profits. The only advantage to cutting costs on consoles is for increased number of subscriptions and game sales.

Exactly, March 2024 makes sense for the earliest and I have a feeling that March 2025 is going to be the date.

So DS only sold 3.6 Million from "now" on untill end of life. Switch will demolish this number. I still think Switch can surpass NDS.

I think so, too. Assuming there's no replacement within 24 months, which I doubt, that's about when it would happen.