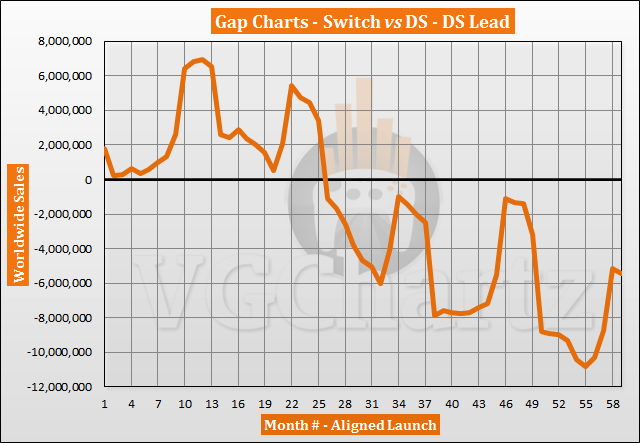 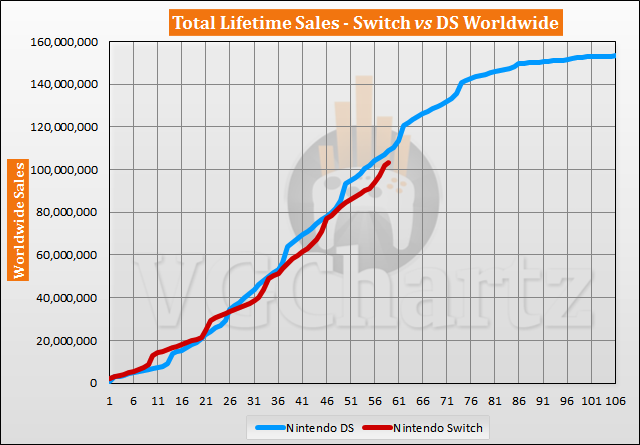 January 2022 is the 59th month that the Nintendo Switch has been available for. During the latest month, the gap grew in favor of the DS by 294,042 units when compared to the Switch during the same timeframe. In the last 12 months, the DS has outsold the Switch by 4.10 million units. The DS is ahead of the Switch by 5.44 million units.

The 59th month on sale for the Nintendo Switch is January 2022, while for the DS it is September 2009. The Switch has sold 103.45 million units, while the DS sold 108.88 million units during the same timeframe.

So within the next 12 months, the DS will ship 22 Million Units which is slightly higher than what most people on this site are forecasting for the switch in 2022 with around 20-21 Million units, so we should see the gap slightly go in the DS's favor within the next 12 months which would give the DS a 11-10 Million shipment lead by the end of 2022.

However, 2023 and after for the 7th year of the DS lifecycle the DS sales sharply drop to 14 Million than 4 million for everything after 8th year (or after March 2024 for Switch's timeframe). This should be the best chances for the Switch to close the gap, but really all depends on when the Switch successor drops, but I do believe the Switch's decline will be alot less sharp and significant than what the DS experienced for several reasons.

-The Switch is a far more profitable console than the DS. Software sales are noticeably better and digital distribution is helping increase those profits, also switch is still priced at its launch price meaning bigger profits

-Switch has more room for price cuts than the DS did at the same time period. The DS recieved its first real price drop only 1.5 years after launch while the switch is going on its 5th year and is priced overall more expensive than the DS ever was.

-Switch doesn't really have any competition pressuring them to release new hardware, Sony been left the portable industry and consumers & developers now know that mobile gaming is no match for the switch unlike in 2011 where mobile gaming was thought to be the future.

-Switch is now Nintendo's only platform, and not only that but wildly successful with a huge install base. Nintendo would more likely want to keep supporting the switch even after the successor releases so the Switch would be a safety net in case the Switch 2 underperforms, its not like the DS where Nintendo still had the Wii and potentially the Wii U that Nintendo could depend on if the 3DS flopped. Also, Nintendo software teams only need to worry about the Switch & Switch 2 unlike 2011 Nintendo where they had the Wii,Wii U,3DS, and DS to worry about.

I feel like there's no way Switch will sell under 25mil this year with the lineup it has as Nintendo hasn't even revealed the Holiday lineup this year wich will include 1 or 2 unannounced big games. Still iffy on Switch surpassing the Ds. It'll be close though. Could go either way.

The market is starting to get saturated though. I can see close to 50m more selling, but it needs a little more than that. So obviously it's not like there's no one to buy a switch, but over half of the switches that will ever be sold have already been sold.

So yeah, the games will help this year, but there's only so much that can be done to prop up the sales as things wind down over the next few years

Nintendo can get there if they want to

And they need a 2025 launch for the successor. Any sooner and there's no chance.

Even if the successor came out in Holiday 2024, I still think it could do it.
A strong lineup in 2023 + the semiconductor shortages finally getting sorted out could lead to plenty of pent up demand finally being met and perhaps another year of 20m+ sales which would put the Switch somewhere in the 140-150 million range heading into 2024.

I kind of expect the sales to drop around 5m per year from here on out. So the last full year won't be terrible, but we're looking at 12-15 million. Assuming they announce the system in October for a March release in 2025, there went the holiday sales.

That's why I say it has to be until 2025. Once they announce the successor, the sales will fall off a cliff. Look at the ps4 as an example. It was still going pretty strong until the new system was announced.

The PS4 dropped so hard because production was lowered too.

Oh really? I didn't realize that. That does explain the rapid shift a little better.

DS's next holiday is still a huge one, the one after it is also pretty good. It has high numbers for a reason after all

i still have the DS on top at the end.

Yeah, they're on a similar trajectory, but it's a tall mountain to climb.

DS is about to enter its last big holiday.
Switch will start gaining after this. Question is, will it be enough.

Once more with the mislabeled first graph...