Max Mraz knows Zelda. The indie developer cut his teeth on Yarntown, a free-to-play 2D Zelda-inspired version of Bloodborne built in the Solarus Engine, and followed it up with Ocean's Heart, another product of Solarus that wears its Zelda influences proudly on its tunic sleeve. Ocean's Heart, which debuted on PC last year and represents Mraz's first commercial venture, is another in a long line of indie Zelda-like titles on Switch. So, how does it compare to the others?

Ocean's Heart begins in the humble seaside village of Limestone, where life is drowsy but peaceful. You play as Tilia, an adventurous young woman who works at her family's tavern. One day, while Tilia is off completing a task, pirates unexpectedly attack the town and abduct her best friend Hazel. Mallow, Tilia's father and volunteer navy member, takes to the seas on a rescue mission. Months go by, without a word from either Hazel or Mallow. Finally, Tilia decides to set off in her father's footsteps, to find her missing loved ones and, in the process, uncover a sinister plot with potentially devastating consequences for the entire archipelago. 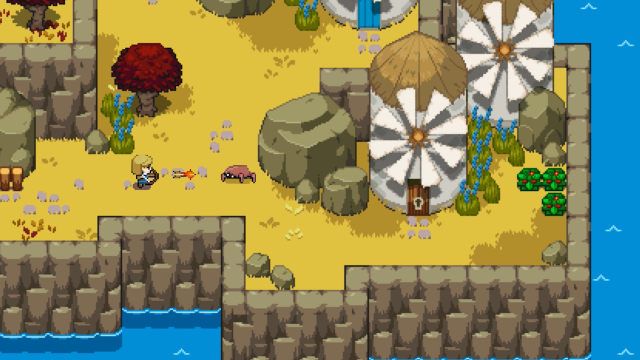 The story in Ocean's Heart does an overall good job at pushing you forward. At each port and in every town you visit, you're sure to pick up a breadcrumb or two hinting toward the whereabouts of your father and best friend. That said, the main story line — and, by extension, the main quest line — pale in comparison to the game's collection of side-quests. Where the main quest spins its wheels for a while before ending in an abrupt anti-climax, sub-quests generally take you to unlikely places and unpack the game's surprisingly dense mythology. Ultimately, Ocean's Heart is at its best when you're poking at the fringes of the world, discovering secrets, chatting with weird NPCs, and absorbing the local flavor.

Consequently, exploration is the most essential part of this Zelda-like adventure. It's great fun to wander through the game's discrete areas — mangrove thickets, fishing villages, misty forests, sandy shoals, stony cliffs, and soggy marshes — and stumble upon caves, ruins, hidden paths, strange monoliths and statues, and other secrets. Often you'll discover something totally mysterious with no clear answer; you'll simply have to return at a later time. In general, Ocean's Heart gives the player a lot of agency to explore the world at their own pace and with their own sense of direction. Even the main quest refuses to use waypoints. If you want directions, you must chat up the locals; if you want the destination marked on your map, you need to find it first.

While Ocean's Heart delivers on one Zelda tenet — exploration — it's less impressive when it comes to other staples like dungeons and combat. Dungeons are your typical 2D Zelda fare: enter the keep, locate keys to unlock doors, tangle with baddies, find the special item, defeat the boss, earn a health upgrade. All the game's dungeons are perfectly fine, but they're on the short and simple side. Dungeon bosses are a tad disappointing as well. Apart from the penultimate and final bosses, they're mostly unmemorable.

Combat, like dungeons, is fine but forgettable. While Tilia has access to a wide range of sub-weapons, spells, and consumable projectiles, you can usually win the day by spamming your default sword. In fact, there are several elements in Ocean's Heart that are interesting in theory but not woven thoroughly into the rhythm of the game. There's a potion crafting feature that can be ignored entirely, and a magic meter that refills too quickly to prompt any last-minute adjustments in the heat of battle.

Even though you don't need to deploy some of your spells and weapons, you might just do it for fun. You'll gain access to standard weapons like a boomerang, bow, and bombs, and atypical offensive items like Devana’s Barrier — a magical shield that deflects projectiles — and a flail that evokes memories of Final Fantasy Adventure. 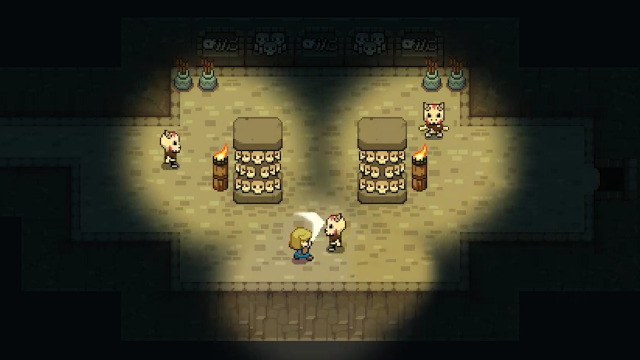 Ocean's Heart is a sizable adventure for a top-down indie Zelda-like game, so you'll have more than enough time to experiment with these weapons and spells. Indeed, you should plan to set aside about 10 hours for the main campaign, with a cushion of several more hours to complete all side-quests and optional content. The game certainly provides an appropriate value proposition for its $15 asking price.

It also provides some nice-looking sprite work. Anyone drawn to the aesthetic of games like A Link to the Past and The Minish Cap will feel right at home in Tilia's world. No surprises there, given the Solarus engine. What is surprising, however, is the quality of the game's music. For a humble Zelda-inspired game developed mostly by one man, you wouldn't necessarily expect a catchy soundtrack, but that's exactly what you get. The tunes deftly blend woodwind and percussion to bring the identity of each area to life. The plaintive "Lotus Shoal" and the snappy "Oakhaven City" are especially good.

With Ocean's Heart, Max Mraz has done the Zelda formula justice. The game's not perfect — its dungeons and combat are relatively mild and its main campaign is eclipsed by more engaging optional content — but it successfully channels the adventurous spirit of Nintendo's fan-favorite franchise, particularly in its overworld. It will be interesting to see how Mraz leverages his skill in the genre moving forward.

This review is based on a digital copy of Ocean's Heart for the NS, provided by the publisher.

I’m pleased to hear it’s worked out alright. Hopefully Max Mraz and core team go on to even better things.