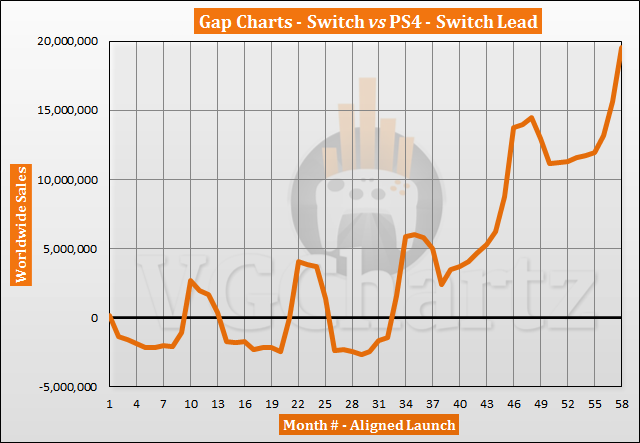 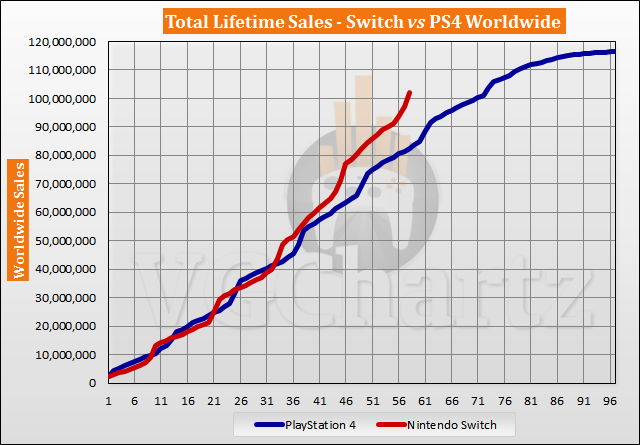 Switch sales always look impressive, but when you take it into the context of this comparison they look especially impressive. The PS4 sold really well up until this last year. The Switch being 19M ahead and still selling faster than the PS4 in the same timeframe just shows how high the Switch could be at by the end of its life.

Impressive, Now I can see Godzilla's Back in the first Graph.

Switch not only has beaten the upcoming holiday season for PS4, but is half up the next one as well. After that PS4 flames out. Well, Sony wants to produce another million in 2022, but that will not cut it.

Man, things were fairly close and back-and-forth between them until around the 60 million range. From there, PS4 continued its nice, gentle slope up the hill, but Switch was like WE GOING TO TEH MOON BOYYZZZZZ

Almost 20m lead for Switch looks impressive, but keep in mind that PS4 has one holiday season less than Switch currently. The gap should shrink to 15m in the next couple of months, before it increases again.

Are you sure about that? PS4 launched during a holiday season, so I'm not sure how Switch could ever have more if they're aligned.

Is the other way, PS4 has the first Holiday boost, that's why PS4 Started on top of the Double Helix.

You're right. My bad.