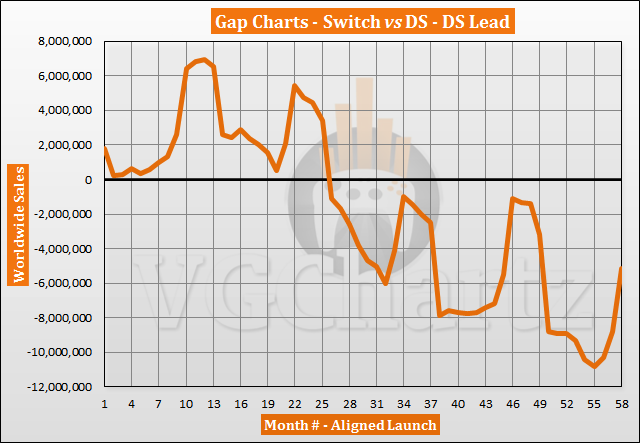 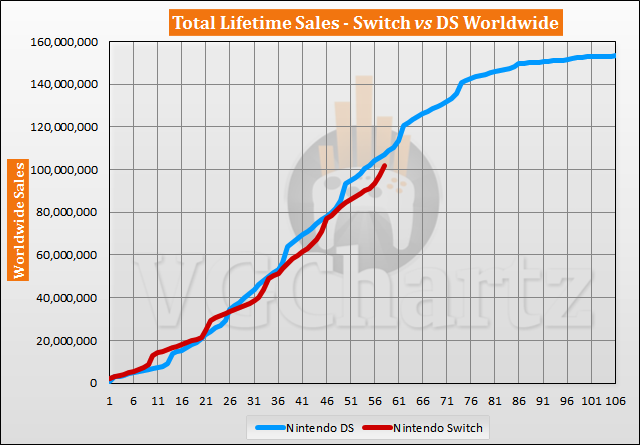 Switch can make it happen!

going to be close

DS still gaining ground but it has only a little over a year until the 3DS comes out. If the Switch doesn't get replaced in early 2023, then it will remain longer as the main Nintendo console on the market. It will give it a significant advantage to catch up the difference. Thing is, will Switch be alone on the market long enough to win this ? Only time will tell.

Nintendo as a history of being receptive to competition on the handheld market. They cut short the GBA and the DS because of the PSP and Vita being a lot more advanced. It will be interesting to see if they start talking about successor this year with Steamdeck on the market. Even if they are not really in competition, it could make them jump the gun faster. I do think they will wait until 2024 since the chip shortage will be not the best situation to launch a new model. With Switch still having enough wind in it's sail, there is no need to release a new system in an environnement where you won't be able to produce enough units. Switch's chip is not the most in demand and has an advantage. But a successor could be dipping in something more in demand, further pushing their desire to wait a little longer.

To me, i really can't wait for a Switch system that is more up to date, but i feel like the longer we wait, the more impressive the leap will be as well.

Exactly, I want a newer system but Nintendo still has many cards to continue: Strong 2022 lineup, Price Cut, OLED is still hard to find (good demand), Unified titles from home and mobile console, no direct competition, Japan dominance, expanding to new regions and they are not into NFT so far...

There is absolutely no reason whatsoever to replace the Switch earlier than 2024. 2+ years from now (~March 2024) would be about right if they don't plan to keep the Switch going for a while. Anything before 2024 would highly questionable and just no business or software reason for it (Switch owners are still waiting for lots of games to hit, some will hit this year, but I'm sure there will be plenty in 2023 as well, so Switch will still very much be going in 2023 with no need for a replacement. There's a lot of life left in this system and it wouldn't surprise me at all if they kept it going until 2025. At this point I don't really think anyone is thinking about next gen Switch ya know, we're still in the meat of the Switch's lifecycle.

Yea exactly. There is just like a game for every franchises coming to Switch this year or next year. A new system would make no sense in 2023 since they would have like next to nothing to launch it with. March 2024 is really where i could see it happening. That leaves enough time alone on the market for the Switch to become the best selling console of all time eventually.

Yea, i feel like the Switch still has a big sales potential still. In some countries in Europe it did better in 2021 than in 2020. Europe is really receptive to price cuts for Nintendo models so i'm sure if they want to, they can cut the price and have a budget line of games and sell another 22-24 millions this year.

It didn't touch DS's line this time around

I didn't know God wanted that

God want us to feel like it won't reach DS level for now, because the suspense is so good, but this Holiday should reach it.

surprised no ban yet!

For the next 3 weeks, DS will stay at its base of 340k, so I expect it to be head to head with the Switch (unless we see some unexpected boost soon) i.e flat line, but past that the DS will sell 10M in 10 weeks, so the next dip will increase by another 7M, taking the gap to negative 12M. Best case scenario, 10M if we see last year's numbers, taking the gap back to month 55 (but honestly I doubt it). Sorry guys, but I don't see Switch outselling DS anytime soon, if ever. Switch would have to pump out on average 20M+ per year for another two years, to even start closing this gap. I'd love to see that, but this is too optimistic for me. It's too little too late.

Unless Nintendo fuck up royally I don’t see why the switch can’t do at least 140m.

Honestly I'm impressed it is within a few million of the mighty DS! All about the legs now. Should come short but who knows!

Switch clearly lost some ground during the last 6 months. Now Switch needs some kind of wonder to turn this around. It all depends on how fast Nintendo kills Switch with the release of a successor, because DS died very fast.