It's difficult to comprehend that Clockwork Aquario is now available to the general public. In the words of lead designer Ryuichi Nishizawa, "It's almost a miracle and unbelievable." Developed in 1992 and put in mothballs shortly thereafter, the arcade game from developer Westone (Wonder Boy) arrives on Switch and PS4 today — nearly 30 years after it was cancelled. Playing the game in 2021, one wonders why it was so unpopular during its locations tests. There's something undeniably charming about the title, even if it's held back somewhat by its arcade roots. 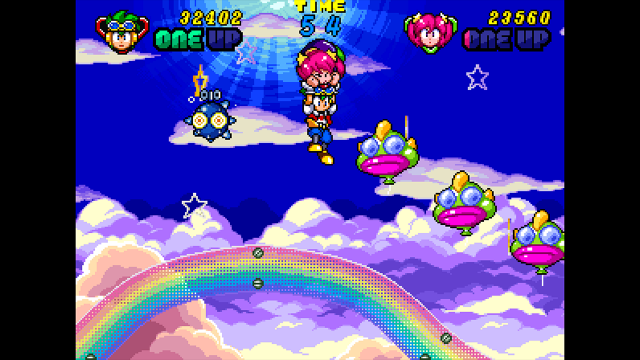 This simple storyline is really just an excuse to hop, skip, and jump through the game's colorful levels and experiment with its remarkably good controls and gameplay. For a 30-year-old game that was cancelled from lack of interest, Clockwork Aquario plays surprisingly well. The 2D platforming controls are precise and responsive, each of the three playable characters feels appropriately weighted and, in general, there's a satisfying smoothness to the action.

That smoothness comes from the general flow of the game, which, when played with an eye toward high scores, feels almost rhythmic. Each character's moveset is relatively tiny — jumping, punching, and throwing is the name of the game — but every maneuver tends to build upon and complement the others. You can punch or jump on enemies to stun them, then pick them up and throw them into other baddies or through a series of floating balloons, triggering one of several drops: a gem that boosts your extra life meter, a potion to restore your health, or a star that grants you invincibility and projectiles for a limited time. Once you've memorized the levels and mastered the mechanics, you'll find yourself bopping through each level, chaining together combos, picking up stunned enemies in mid-air, and racking up high scores. There's an energetic sense of forward momentum in Clockwork Aquario, when everything is working right. 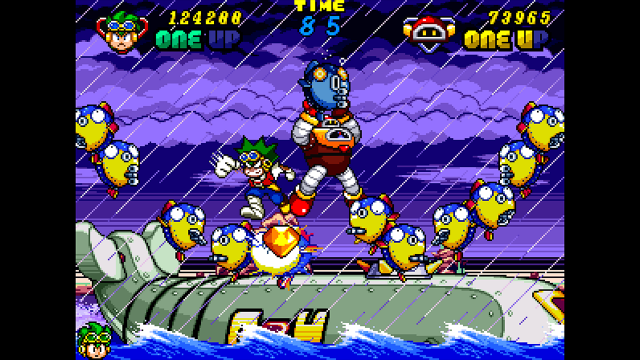 While Clockwork Aquario boasts solid controls and rewarding gameplay, it doesn't provide enough opportunities to enjoy them. The game is woefully short. Indeed, you could finish all five levels in less than 30 minutes. This is unsurprising given its early 1990s arcade roots, but it's disappointing nonetheless.

On the bright side, the game offers a few reasons to replay the campaign. There are three playable characters, each with slightly different controls and physics: Huck is a speedster; Elle has a higher, floatier jump; and Gush is a giant bruiser who actually moves forward slightly whenever he jumps. Clockwork Aquario also supports two-player co-op, which changes the experience in small but meaningful ways. Tanja Meier wrote that "Playing in co-op mode is more difficult and easier at the same time", and it's absolutely true. Since you can pick each other up — on purpose or accidentally — it makes the proceedings a little more unpredictable. There are small variations to enemy and balloon placement in co-op, and there's a diverting competitive mini-game between stages. Finally, Clockwork Aquario keeps track of your high scores in a local leaderboard. No online leaderboards, regrettably. 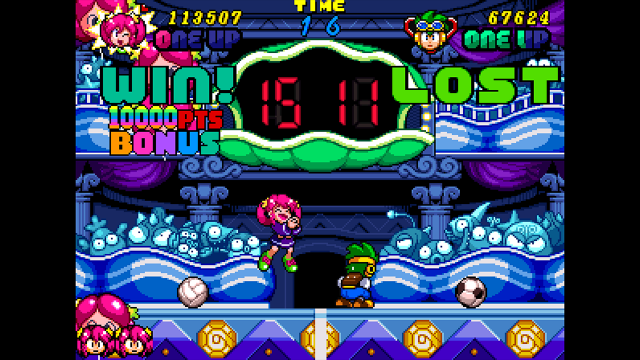 There are also a few extra modes and bonus features, although these are less impressive than they seem at first. There's a training mode, easy mode, normal mode, hard mode, arcade mode, mini-game mode, gallery, and soundtrack. Training mode allows you to play through the first two stages with unlimited continues to get your footing. Easy mode, normal mode, and hard mode are, unfortunately, essentially the same experience, just with a shrinking number of continues. Arcade mode allows you to enter "service mode" of the Clockwork Aquario arcade cabinet and modify various arcade board settings — it's more of a novelty than anything. Mini-game mode lets you and a friend play the inter-mission mini-game from the campaign. The gallery includes concept art, promotional materials, and a couple of heartwarming notes from folks who worked on the original game and the finished product. Soundtrack is a music player complete with the excellent original soundtrack and a remixed version. Finally, there are a bunch of filter and display options.

Since the main campaign is so light on content, it would have been nice to have seen some additional modes like score attack, boss rush, etc. 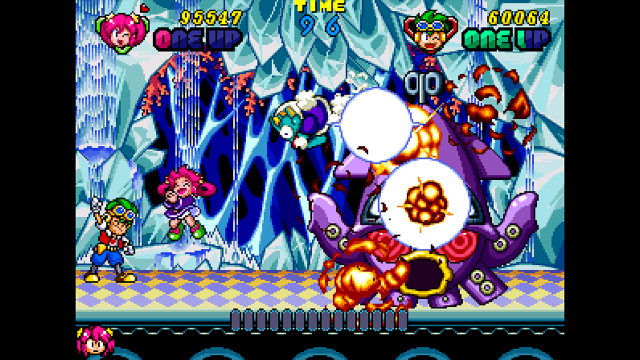 While Clockwork Aquario has room to improve on the content side of things, it's hard to ask for anything extra when it comes to graphics and music. This is a gorgeous game, with colorful & chunky sprites, creative enemy designs, and exceptional attention to detail. The most obvious detail is the silly way in which the three main characters show battle damage — Huck has a cast on his leg and Gush's entire head pops off — but look closely and you'll see that the portraits on the top of the screen change based on what the character is doing. Little things like this show a lot of love went into this production.

The music, from Westone regular Shinichi Sakamoto, is energetic, bouncy, and bubbly — a perfect complement to the wacky undersea adventure. The only audio problem is a small one: the slightly-irritating sound of characters jumping (this is more pronounced in handheld mode for some reason).

If you're concerned about investing in a game that was canned 30 years ago, worry not. Judging by the final product, lovingly restored by Steve Snake, Ratalaika Games, and several of the original Westone employees, this game should never have been cancelled. It looks amazing, it sounds great, and it plays remarkably well for its age. The only downside is there simply isn't enough of it. If the stars align, maybe we'll see a revamped, expanded version of the game in a sequel. Huck, Elle, and Gush have certainly earned the chance.

This review is based on a digital copy of Clockwork Aquario for the NS, provided by the publisher.

Waiting for my physical copy in the mail. Excited. I love Westone old work esp the Wonderboy series.

Wow, cancelled in 1992 and now revived. That's quite a story. 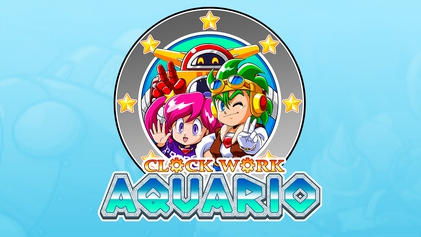