This year I was diagnosed with Roguelite Disassociation Syndrome, or 'R.D.S.' for short. Between Neoverse: Trinity Edition, Returnal, and ScourgeBringer, it's hard to tell if I'm coming or going these days. I saw an exact copy of myself in the upstairs bathroom, so I locked him inside before he could explain himself. Likewise, the guy downstairs took some convincing, but I swear this is in all of our best interests. Until we figure this out, it's best to talk about Dreamscaper. Though it might fall short of becoming the next Hades, it's nonetheless a very strong effort and an impressive debut from Afterburner Studios. 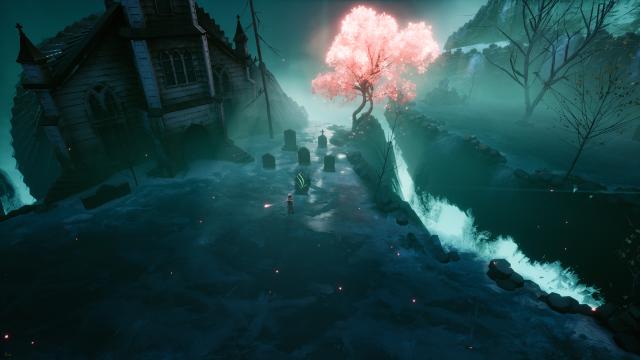 Dreamscaper explores the outer and inner worlds of aspiring adult Cassidy, a small town girl in an unfamiliar city. Determined, but unsure how to find her way down this new path in life, Cassidy seeks to embrace the community, end her depression, and conquer the greatest enemy of all: herself.

Zagreus this is not. Introverted, lacking confidence, and slightly heavier than your average heroine, one might initially question why anyone would want to play as someone best described as 'mopey, yet approachable'. But when you understand that this person needs to be helped, it makes her more relatable than a demigod. Cassidy is especially poignant if you've ever met someone like her, and if you haven't, it's easy to know what it's like being in her shoes. Sometimes, the road to healing is a two-lane street. 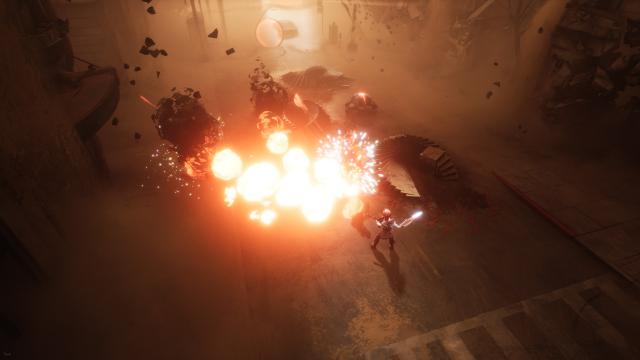 Taking place in our current era, Dreamscaper identifies itself as a 'procedurally generated action roguelite with permadeath'. Those hip to the lingo will have an approximation of what to expect, but it's important to consider that Dreamscaper undersells itself slightly. This modest overtone permeates the rest of the proceedings; should the player be willing to accept the game's minimalist art style and benign dialogue at face value, their reward is a highly-addictive experience containing a nice amount of depth and a level of personalization that exceeds what I've encountered in any of its contemporaries.

In an effort to escape from - and heal - her troubles, Cassidy goes to sleep and enters the 'Dreamscape', a distorted realm created from her sub-conscious. Based on childhood memories but inhabited by deadly enemies and self-loathing emotions, Cassidy must overcome the levels of her inner purgatory to blossom into the actualized member of society she was meant to be. This might not sound like fun, but if mental health was this entertaining, we probably wouldn't depend on social media as much as we do. 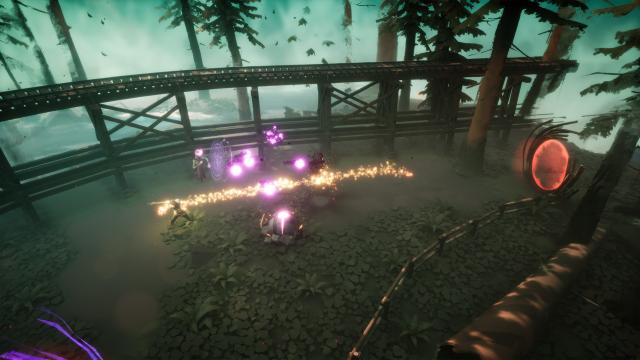 Dream. Die. Wake. Repeat. This tagline from the trailer best describes Dreamscaper in a nutshell, and it's best to begin in that order. Inside of the Dreamscape is where the bulk of the action takes place, guiding Cassidy from room to room as she fights her demons while scavenging for supplies, accumulating various currencies, and gleaning pieces of backstory. This is par for the course as far as the genre is concerned, but Afterburner Studios has its own take on things, adding some great flair that keeps the game fresh and accessible.

'Perfect Attacks' occur when the 'Y' button is pressed while Cassidy flashes white, granting a damage bonus to her melee and ranged options. This can also be initiated from dodges and when properly mastered helps maintain consistency, even in the face of unlucky item rolls. Parrying (defending against an attack at the last possible moment) is a similar technique of equal importance; repelling projectiles and breaking open an opponent's offense are vital to increasing survivability. These add a surprising degree of nuance to every encounter, and who doesn't love pulling off a well-timed deflection? Rewarding skill-based play is always to be commended. 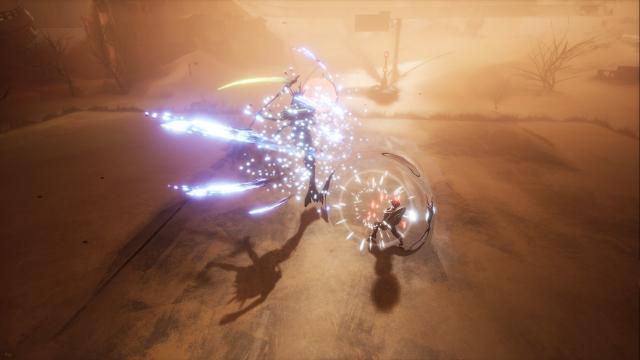 The amount of combat options is beyond impressive. There are over 20 different melee weapons, all having powerful alternate attacks and mastery bonuses to learn. From daggers, katanas, and scythes, to umbrellas and phantom beast slashes, each one feels useful and has the potential to be viable throughout the game. The same can be said for the ranged arsenal. Whether it's bows, slingshots, kunai, or optic blasts, it won't take long to have several favorites alongside multiple favorable alternatives.

'Lucid Attacks' are the equivalent of magical spells, casting cyclones or torrents of water. Up to two can be equipped in battle; if complementary elements are used in tandem, a 'Critical Extinguish' occurs, increasing damage. With 37 to combine and enhance, it can take some time to become comfortable in this category, but it will eventually make all the difference. 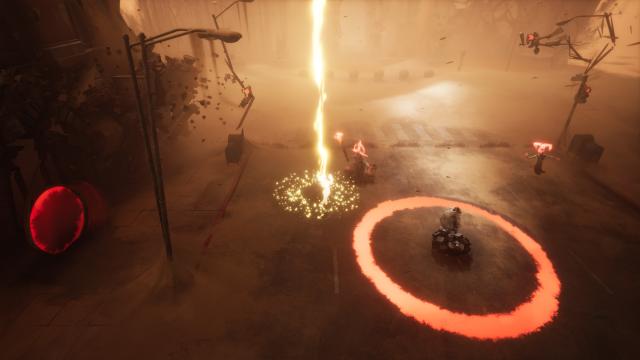 Shields and 'Shoes' round out Cassidy's defense. Though they lack the excitement of their offensive counterparts, both have their place and are just as important. Special consideration should be given to your shield of choice. While attack-absorbing barriers and elemental wards can be useful, losing the ability to parry and reflect is a very costly proposition. Shoes are your movement option and for the most part are a personal preference. Keep in mind to choose mastery bonuses that synergize with your current build.

All of the previously mentioned equipment has the potential to spawn with random modifiers that can be re-rolled at forges and upgraded accordingly. Boxing gloves might not be as appealing as dual swords at first, but when they fan projectiles after every punch, they're hard to resist. Establish your preferences, but keep an open mind to change when you see the opportunity. 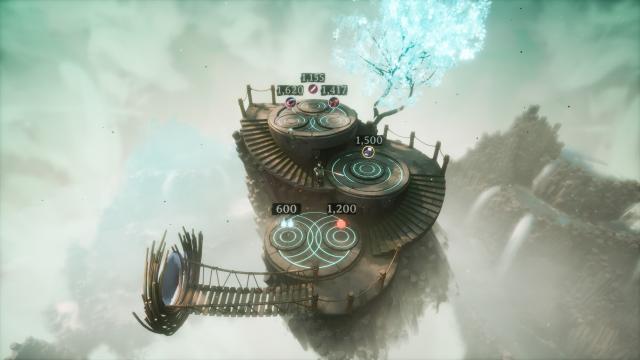 Outside of combat, another wrinkle takes place inside the Dreamscape: puzzle rooms. There are two types and incorporating these into your regular rotations will not only net you some free items, but create a small diversion that mixes up the monotony of the grind slightly. 'Puzzles of Connection' are simple enough, only requiring that all the lines on the floor are lit. It's the 'Puzzles of Revelation' that are the real kick in the ovaries; if you need a quick reminder on why Minesweeper is consistently voted as Hell's favorite game, look no further. I've had more success solving these by randomly stepping on buttons than I have trying to figure them out legitimately. I'll learn eventually – on that cold day after the earth reclaims what is rightfully hers.

Eventually, defeat will force Cassidy back into the Waking World. This actually affords more opportunity than it sounds, giving the player a degree of control over the gameplay that expands the roguelite beyond the trappings of its genre. 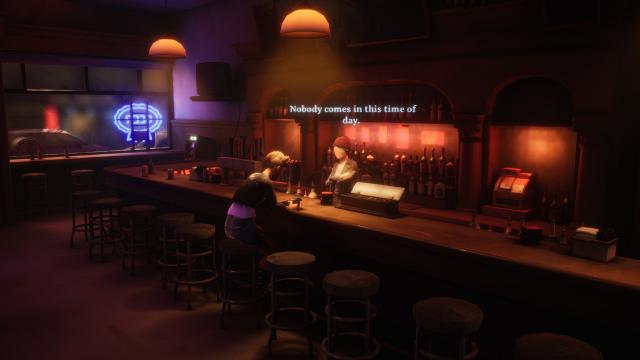 Fans of Persona will recognize a familiar structure in Dreamscaper, supplementing the dungeon-crawling with numerous activities and socializing. Several NPCs can be found throughout Newhaven; establishing relationships with others raises their respective 'Influence', giving Cassidy passive bonuses in combat, such as increased fire damage or faster movement speed. The 'Sketchbook' generates new weapons, items, and spells into the Dreamscape, expanding the pool of possibilities. Meditating in the park gives self-improving buffs, similar to the mirror found in Hades. Daydreaming at the bar can augment the Dreamscape by adding beneficial rooms and passive effects to every run. Each point in 'Font of Life' allows for a healing room to potentially generate once per floor. If Challenge Rooms are your game, increase the chance for them to spawn. Like puzzles? Make their rewards better! The amount of control the player holds over the random nature of Dreamscaper is inspiring, and there's still more to explore.

No matter how fun it is discussing extinction level events with overworked, unappreciated people, all roads eventually lead back to Cassidy's bedroom to prepare for the next incursion. Here, she can craft gifts for her friends, but it's the Dream Journal that deserves the most attention. Not only can Cassidy earn rewards for reaching goals and learn more about the people she's met, it's under the 'Loadout' tab where one of Dreamscaper's crowing features resides. Any previously obtained melee weapon, ranged weapon, spell, shield, and movement option can be equipped to start a subsequent run. I can only describe this as a masterstroke: one of my two chief complaints about the genre (not being able to choose the playstyle you like) has been erased by a single decision. If the player is blessed by regular forge appearances, they can feasibly beat the game on their own terms - a rarity for the roguelite. 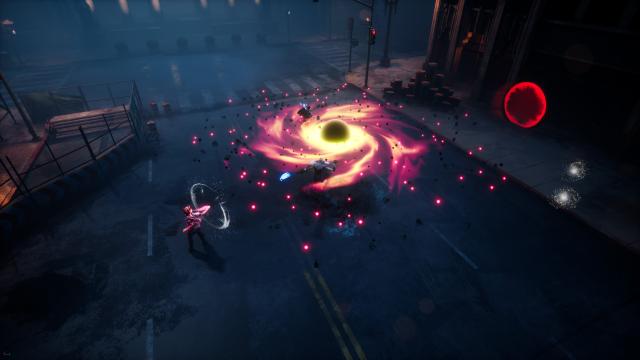 For a maiden voyage, Dreamscaper's flaws are surprisingly minimal. The most immediate that stands out is the lack of enemy variety. Compared to ScourgeBringer (which had over 70 foes), to say it falls short in this regard is an understatement. The lackluster bosses are also noticeable. Granted, these issues can be negated somewhat by increasing the 'Dream Intensity Rating', but it doesn't solve them completely. The planned content drop later this year could render some of this moot (add a Beastiary!), but all we can do for now is wonder.

Other issues are more technical in nature. The amount of pop-in when utilizing Performance Mode is noticeable, but roguelites aren't exactly renowned for their presentation. Besides, the decision over responsive controls and fluid gameplay or better graphics only has one correct answer. And as much as I hate to say it, Dreamscaper can be 'save-scummed' in between levels if you happen to have a subscription to Nintendo Switch Online. It clearly wasn't the developer's intention to allow this degree of manipulation (I merely tried it to see if it was possible), but if you've grown unusually attached to a particular run or are just looking for a win by any means necessary, there is a way to escape total oblivion. 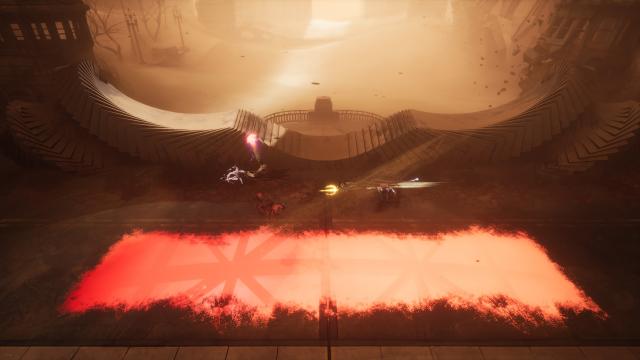 I'm very grateful for what indie games have done for my perceptions over the past year. I would have never thought that I would be spending 2021 championing the likes of Neoverse or Battle Brothers, but I also wasn't expecting Nintendo to try selling me Super Mario 3D World for a second time. The choice between supporting the zeitgeist of Everhood or spending $60 on 2011's The Legend of Zelda: Skyward Sword isn't difficult to make – one of them deserves credit for honest work and the other is looking to turn a trick and make a quick buck.

Regardless, in this moment we should be merry. Those enjoying the summit of Mount Olympus have a new trial to overcome and everyone else has an excellent starting point to a genre that can be intimidating to enter. It may lack the production value of Hades or the atmosphere of ScourgeBringer, and it might be a bit more somber in tone compared to the inhabitants of the Underworld (as funny as that sounds), but the good far outweighs the bad. Each aspect of the gameplay flows into the others wonderfully, and everything has a purpose and a reason for being. 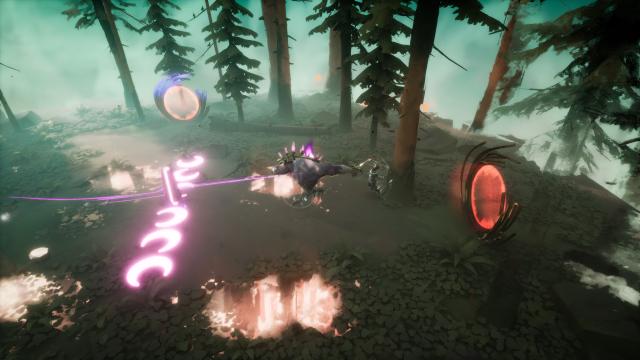 Of all the roguelites I've played, Dreamscaper is by far the most accessible and the amount of freedom given to the player easily ranks it among my favorites. Afterburner Studios enters the gaming world with a very strong debut; I can only hope we meet again in the future. People don't need to be perfect to be beautiful, they just have to be themselves.

In the meantime, I have doors of my own to unlock. I can only hope for forgiveness from those on the other side.

This review is based on a digital copy of Dreamscaper for the NS, provided by the publisher. 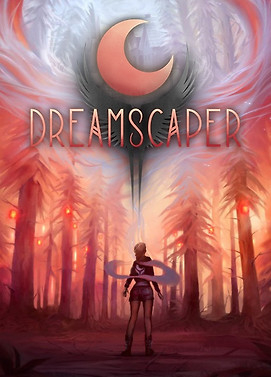