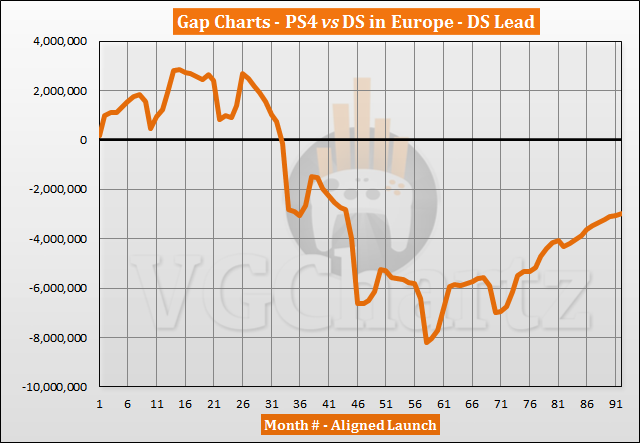 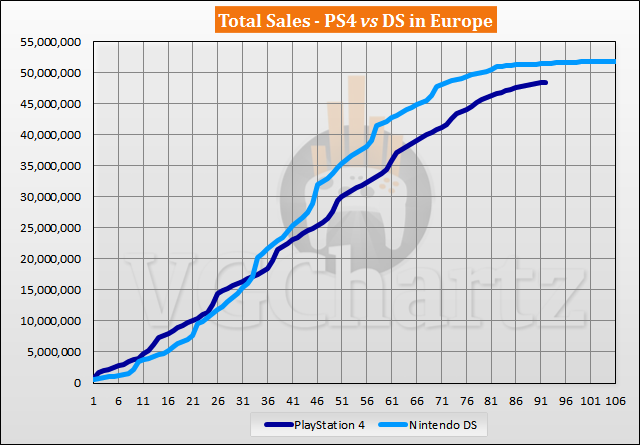 Hmm, close. But PS4 peters out too much, so I don't think it closes the remainder of the gap. I may be wrong, but that is my current impression.

From last year to this PS4 dropping like a rock.

Ya coulda done it Sony but never dropping below 300 really hurt the legs. Gotta get the cheapos locked into the ecosystem

The cheapos don't buy that many games, mainly used ones too, not what Sony wants. They probably thought it's not worth it.

This is the adjusted data for the PS4 right ?

3.4M left .. I don't see it. Even for worldwide sales can't see it, let alone europe .. Only if Sony comes out and make PS4 199$ for the remaining years of it's life then I can believe it will do it. This I think will boost sales to maybe 100K per week for quite some time (if the stock is full everywhere of course) and can help future sales even after the boost, to not drop to levels of 20-30K per week, but stay above 50K per week for also some months after that. The effect would be continuous not just for 1 or 2 months.

i don´t think will work. 200 bucks you have Switch lite. Ps2 longlifespan due for a combination a cheap DVD and no competition in price range. And ps3 bad inicial sales.

Why you are comparing it to PS2 ? I am not saying it will help do PS2 sales. This thing you are talking about helped PS2 moved milions and milions. Here I am talking about moving maybe some 2-3M units more. Yes because it's not PS2's longlife span and because there is some switch lite competition that's why PS4 won't do 20-30M more milions like PS2. We need only 2-3M more, not 20-30. For 2-3M more units it will work.

You made a mistake by answering someone that is trolling regarding long legs of PS2.

In Europe or around the world? Now, the Ps4 may not have legs for 3 million worldwide. Sony makes the right decision here, focus on profitability and make a transition where their new console sells excellently right from the start. The Ps3 had problems getting off to a rough start, Sony is doing its best by focusing on one console at a time.

with PS5 having BC, it makes no sense for sony to drop price when they can instead try pushing the ps5 for only around 100$ more...

Or they could cut price and get people locked in. That means more plus subs and future ps5 owners when it's price drops and they maybe have more money down the line

Reduce profitabilty and have strong competition in the same price range. Devaluete brand, for less profitability.