I wasn't alive during the glory days of arcade gaming, where you could go down to your local arcade at the weekend and spend hours putting endless coins into things like Commando or Shock Troopers. Despite this, I know enough about that period to say with certainty that SturmFront is the kind of title that would have fit into any arcade exceptionally well. It's a challenging, fast-paced run and gun shooter that really doesn't bring anything new to the table but succeeds at the elements it emulates. 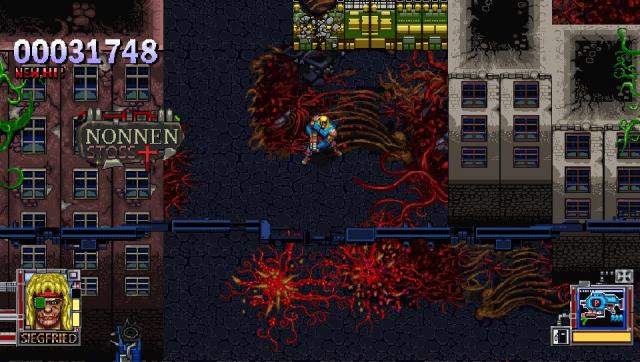 I was in fact reminded of one game from my youth upon booting up SturmFront - Loaded, the bloody PS1 top-down shooter; it shares many gory traits with this title. The world here is a post-apocalyptic one, where humanity has been decimated by mutants that have evolved from 'the flesh', an organic alien lifeform that fell from space and was experimented on by Dr. Griesgram, who is now holed up in his laboratory away from the devastation outside. As a desperate final measure he activates Siegfried, a synthetic lifeform he created whose sole purpose is to destroy all organic life and liberate the planet from the mutant threat (basically Terminator in videogame form).

Although undoubtedly cliche, it's definitely an interesting set-up that kept me engaged. You'll be given little snippets of information about each level you're entering during the loading screens, which helps build up the sense that SturmFront's world is a coherent one. There's a whole history of the war and Dr. Griesgram's involvement that's uncovered, even if it is ultimately via text boxes. Each area also contains notes you can read about the struggles the inhabitants have gone through fighting for survival and ultimately falling prey to the mutants. Combined with the visceral pixel art featuring blood and gigantic mutant monstrosities inhabiting otherwise normal environments, it certainly helped to keep me engaged in the journey forward. 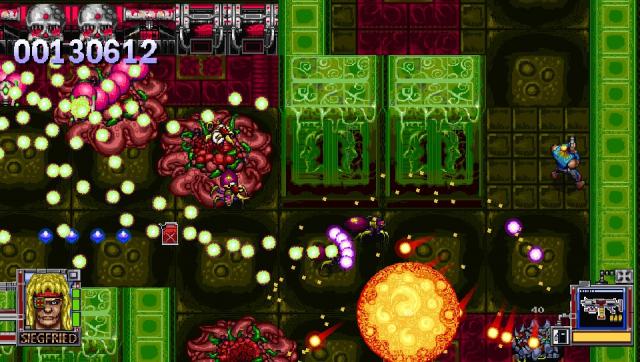 There's a somewhat heavy metal feel to everything, from the graphics to the plot, that's in the vein of Slain, albeit mixed in with a cyberpunk vibe in places, particularly when you discover some of the laboratories where the mutants were made. It is of course accompanied by a suitably rocking soundtrack that makes you feel like a badass as you massacre all that stands in your way. On the audiovisual side SturmFront offers little that we haven't seen before from the last decade of indie games, but it succeeds by polishing those ideas well and sticking to its theme and art direction throughout (you can also unlock some bonus artwork stills upon completion and they're are fun to flick through).

In terms of gameplay, SturmFront harkens back to the classics. You control Siegfried with one analogue stick and aim with the other, although interestingly you have to hold the shoulder buttons to shoot, with each one corresponding to a different weapon (left is a machine gun, right is a flamethrower). You generally pick off enemies from a distance with the machine gun but you'll need the flamethrower to tackle them when they get up close. The flamethrower can also be used to seal up nests that the mutants spawn out of, but it has a fuel meter, meaning you'll have to be careful with its usage unless you find some extra canisters along the way. 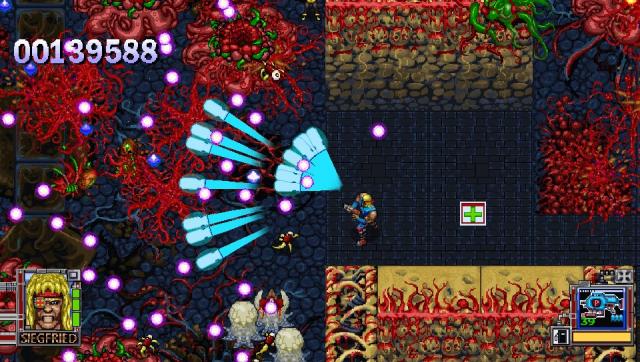 Siegfried's speed is a little slow, so the gameplay is more purposeful than some of the more modern and faster-paced scrolling shooters that are on the market, like Dead Nation for example. The game employs some bullet-hell elements, where you'll see the screen light up with colourful projectiles that you have to cautiously weave your way through, and it's moments like those when SturmFront really shines. Some of the boss encounters in particular, where you're constantly moving and thinking about where you need to be positioned next, were when I enjoyed myself the most. Unfortunately the framerate can get a little dicey at points as a result, but in a fun Earth Defense Force kind of way where too much is happening at once.

Of course, the moment-to-moment gameplay in levels is fun too, with enemies coming in a variety of sizes (from big to small, stationary to fast-moving, launching projectiles to kamikaze-ing towards you), and you'll need to adapt your strategy to take on all of them. To this end, there are additional weapons you can pick up that are scattered around each zone, including a rocket launcher, plasma cannon, and splitter. These offer different styles of play and getting used to them adds some nice variety to combat. Each one has limited ammo, however, and it's unfortunate you can't put them away and swap back to them later on, but that would probably make the game far too easy. 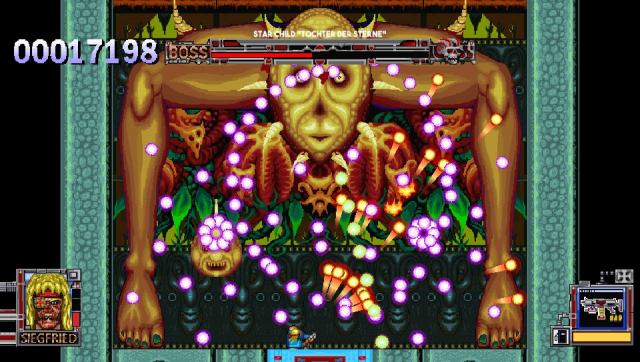 Talking of difficulty, SturmFront isn't exactly a walk in the park and you should expect to die a lot, but death only puts you back at the start of each (fairly short) level. You will have to collect all of your power-ups again (weapon potency can be increased by finding certain items in levels), but generally in the run-up to bosses you'll be rewarded with a small number of these again, allowing you to keep on trying without being overly penalised. This difficulty does inflate the playtime a little, but even then SturmFront is a fairly short game - it took me a couple of afternoons to beat it and the only reason I had to come back was to try it out on a harder difficulty, which I might attempt fully one day in the future.

As the subtitle suggests, SturmFront is a farewell to the Vita and offers a nice throwback that emphasizes what made the console a success for its fans, being an enjoyable indie game that feels at home on the handheld. It’s a bit short, is stuttery at times, and lacks ambition, preferring instead to copy what's come before, but as retro-styled scrolling twin-stick shooters go there are far worse ones out there. It was fun to blast away a few hours playing this title.

This review is based on a digital copy of SturmFront: The Mutant War for the PSV 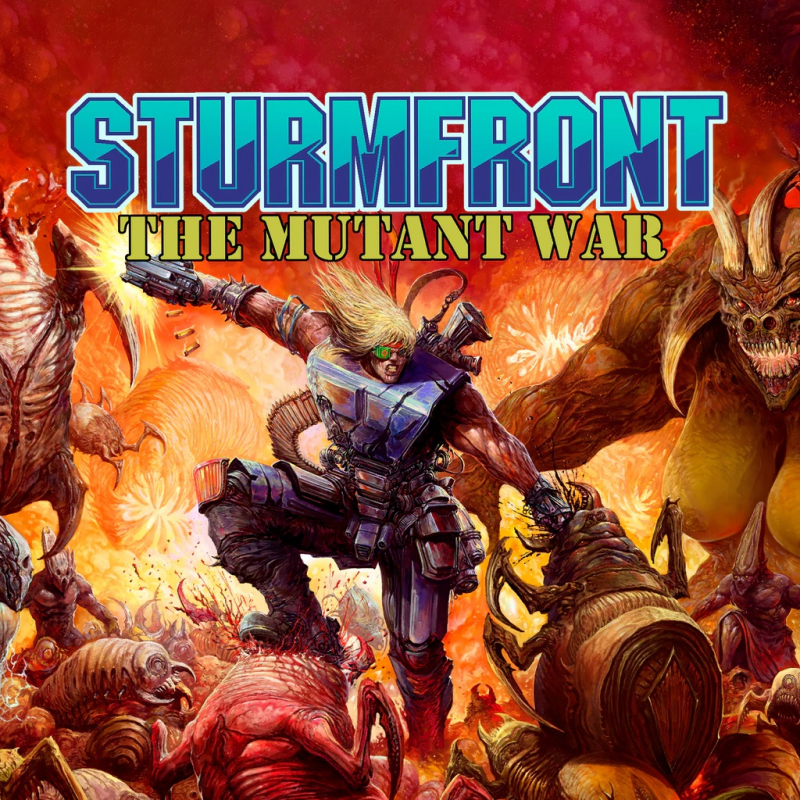