After gaming's greatest 'lounge lizard' went on hiatus for decades, Larry Laffer was figuratively thawed out and brought into the modern age.  Despite finding his revival something of a limp start, I still had a morbid curiosity about this sequel.  There's something about this 80s-styled doofus that developer CrazyBunch could put to greater use; plus, dangling plot threads are an effective way to tempt me back.  Despite this sequel's marginal improvements, Leisure Suit Larry: Wet Dreams Dry Twice won't tempt any adventure fans to get on both knees. 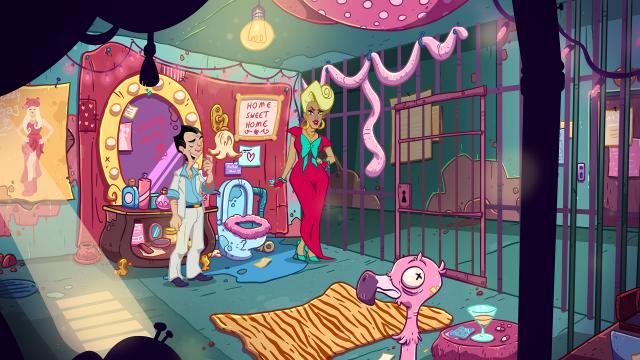 As a continuation of Wet Dreams Don't Dry, and the later-released Happy Ending DLC, Larry still finds himself on Cancúm preparing to marry Spiritual Chief El Rey’s daughter.  Monogamy seems like an unexpected turn in his lifestyle, especially to someone he hasn't biblically known – let alone seen.  His father-in-law has a special way of "insisting" however.  While preparing for holy matrimony, Larry's PiPhone successfully decrypts sent meta-data that reveals critical news: Faith, his truly beloved, is still alive and appears to be drifting out at sea.  While scouring the ocean for her, a tremendous storm shipwrecks him on the Kalau'u archipelago.  Meanwhile, the new CEO of Prune (Apple stand-in), Mr. Wang, is also after Faith for the self-learning algorithm she'd created when previously running the company.

I understand if all of these names in the plot synopsis are overwhelming.  It's like expecting to know everything from an in medias res beginning.  El Rey gives a brief rundown of Don't Dry, but it's not a succinct explanation compared to a detailed cut scene.  It's so odd how you begin in a random location with him and you're given dialogue options to understand Larry's past ventures.  To internalize the importance of returning jokes & side characters you – unfortunately – have to play or watch a stream of previous events.

If you're familiar with Larry's sex-capades then you're reflexively prepared for the fusillade of innuendos that will fly at you, both in dialogue and world design.  This wouldn't be a bad thing by itself; in fact, Leisure Suit Larry games exist in an interesting time.  Considering the ease of access to adult entertainment today, this series' claim to fame in the 80s/90s seems passé for this medium.  Maybe because of how far ahead other mediums have gone this series is trying to keep up. 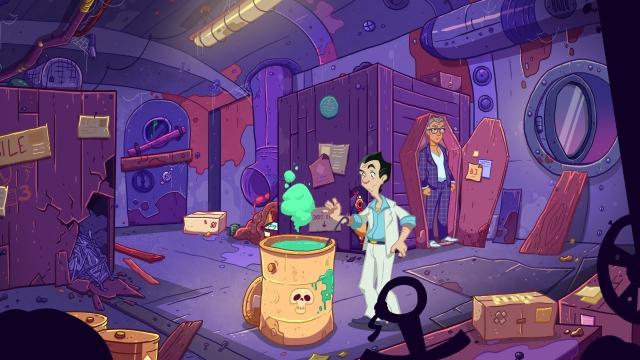 This opprobrium doesn't stem from puritanical inclinations, but more the infrequency of solid jokes altogether.  This is where Don't Dry landed with a thud – aside from one superb level; it was like Larry's pent-up libido made double entendres all any of the writers could think about, along with easy parodies.  With Dry Twice, more consistent writing on Cancúm & Kalau'u made all the phallic and yonic visual gags easier to swallow.  It's not that hard.  Blending in the improved comradery of Larry & Pi (Larry's PiPhone AI), better nerd-culture jabs, cryptocurrency, and incorporating Larry's "21st century sensitivity training" occasionally had me anticipating the punchline.

Even though I have misgivings with the supporting cast, I thought their writing was slightly better than in Larry's previous entry.  If it weren't apparent already, some of the parodies could be unsettling for some of the audience.  The worst offender of lazy stereotyping would be Mr. Wang.  This cross between Kim Jung Un and PSY (seriously!) is an insanely sex-hungry CEO who'll extend every call to his paid assassin to describe a new fetish.  If Leisure Suit Larry was a big part of gaming today, this would probably carry the same awkwardness as Mickey Rooney cast as Mr. Yunioshi in Breakfast at Tiffany's.  There are several other parodies too, but at least they’re not all bad.  The exoticness and variety doesn't make them feel like bottom-of-the-barrel efforts, unlike in Don't Dry.

Larry Laffer's point-n-click adventure template makes its expected return.  After familiarizing yourself with the simple dialogue system, you quickly get back into the swing of things.  For the untrained adventure fan this means scanning over the environment, via the control stick or bouncing between objects with the controller triggers, to hoard items in Larry's vest pocket.  Such items fall into one of two categories: awarded to an NPC or combined MacGyver-style with other items.  For example, sousing an object in alcohol can trick a hungry animal into getting drunk. 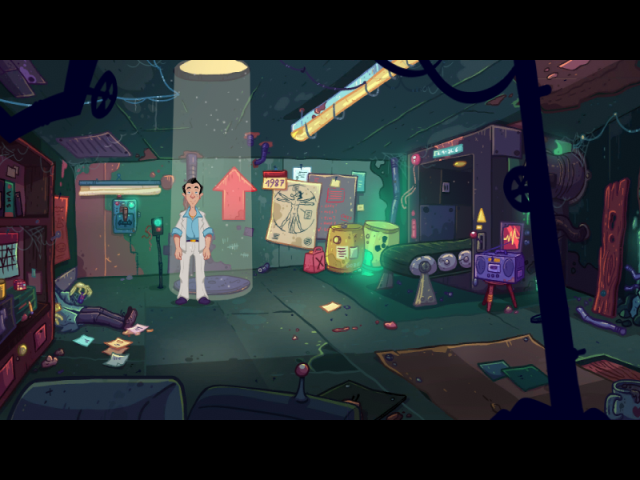 Another layer has been added here with a collection of items being "grabbed" when Larry takes a PiPhone picture.  It's essentially an abstraction of an item/items he can't carry with him but can be used for blueprints.  There are some of other nuances and quality-of-life improvements that serve Larry better here.  One of the most sensible is the new task notepad.  Being lost won't be an issue should you set the game aside for a few weeks.  Also, the snappiness when skipping between areas feels smoother – I’m sure in part thanks to playing on a Series X; in fact, I don't even recall if that was available in Don't Dry.  Finally, nautical navigation across the archipelago provides more player involvement than hailing a cab, and it's incorporated into some of the better puzzles.

Saying "better puzzles" makes me reflexively reconsider my words though.  CrazyBunch's past sins of so-called moon logic and occasionally nonsensical pixel-hunting can get the better of Dry Twice.  Sure, the pacing and tutorial for the opening work on their own.  It's when arriving to Kalau'u that the demands get heavier in quick succession and certain item combinations more confused.  The initial tailwind from the pacing's sails begins to wildly vary in speed & direction.  To be clear: it's still marginally better than the previous outing, it's just those obscure item contrivances nag at me when I can tell this team can incorporate good ideas too.

Among the most flagrant time-wasters here would be the labyrinthine maze utilized several times towards the end.  You're essentially playing Escape Room: view the special contents within each room, consult your directions, and make a choice on which door to go through.  Failure results in being kicked back to the beginning.  In all honesty, there were times each of the four directions were not recommended for me.  Eventually, the repetition broke my brain and I decided to save-scum until beating it.  What could've been a great visual gag about a man's natural sense of direction (as Larry put it) turns into this enervating guessing game.  I desperately wanted to leave these parts behind as soon as possible. 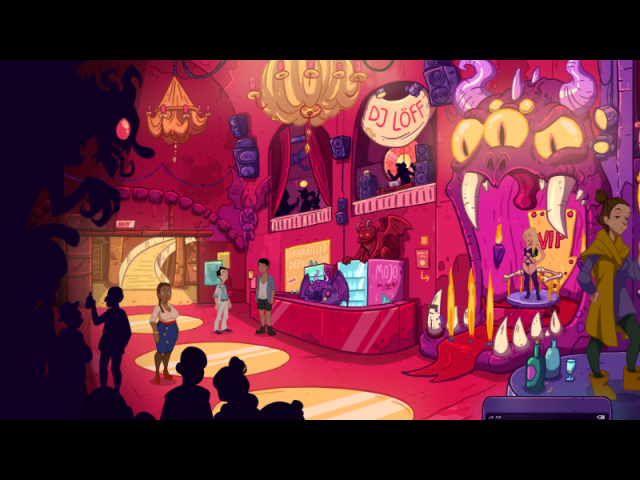 Taken as a whole, Dry Twice is very capable of providing the same lows as its forebear.  It's not bereft of inspiration either.  One such example is in reincorporating another pixel-bit adventure level without it feeling like recycled old material.  CrazyBunch did a solid job with extra mechanical flourishes too, but it's so frustrating how they get caught in this rut pretending intentional obscurity is the same as intelligent puzzle-crafting.  With all of this said, it's another example of slight improvement when assessing from a bird's eye view.

In keeping with this theme, the sequel's presentation has bumps in detail and complexity.  Since Don't Dry perfectly captured the exaggerated swagger of a blithe philanderer, the visual artists could focus more on the landscapes and background detail.  The tropical locale is often complimented by a warmer color palette, while not spit-polishing the griminess of the seedy spots either.  The technical graphics haven't seen a great jump in detail or flashy effects, but this team's done a better job at framing areas.  There isn't as much useless empty space, making the prop hunt a bit more challenging.

Sound design follows in lockstep with this humid playground as well.  Tilo Alpermann's soundtrack takes the same baselines of the grand orchestra from Don't Dry and retools them for these new environs.  It's like going from concert hall to tiki hut.  Expert as he is, Jan Rabson harnesses Larry's inveterate womanizing with ease.  The standout of cast once again.  On the opposite end, several actors for the new side characters don't capture their caricatures to any believable extent; in fact, they’re mediocre compared to the original crew.  Sound design also has some issues with respect to separate lines of dialogue smashing into each other and occasional audio anomalies.  When considering the console port timeline between the original and this sequel, I get the feeling this had a rushed deadline.  That's just speculation on my part. 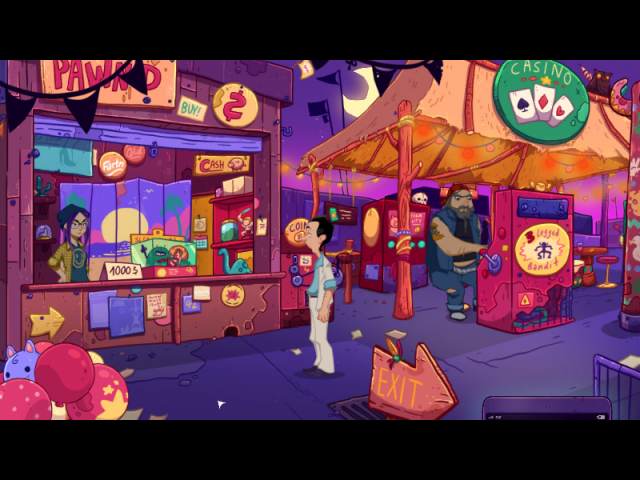 Value is a fascinating intersection to consider.  I grant that incremental refinements – however minor – were credited across various categories; moreover, its runtime has also grown a few inches hours.  This takes on another dimension when considering its inflated retail price of $45 though.  Creeping towards higher middle-market games raises suspicion.  Now the question becomes this: how much are expected sequel improvements worth to a sub-par result from before?  This was something that got to me.

In a sense, I can't help but commend Larry for the hustle.  Like a burnt-out pickup artist, his trade tricks don't carry the same success rate; and yet, expectations are higher than simply improving in increments from CrazyBunch's flaccid first try.  Dry Twice is another example that sexual faux pas and double entendres aren’t as impressive in modern gaming without the writing and gameplay to carry them.  Until that changes, I think these new entries will always feel like sloppy seconds.

This review is based on a digital copy of Leisure Suit Larry: Wet Dreams Dry Twice for the XOne

I find the main character ugly. No thanks.