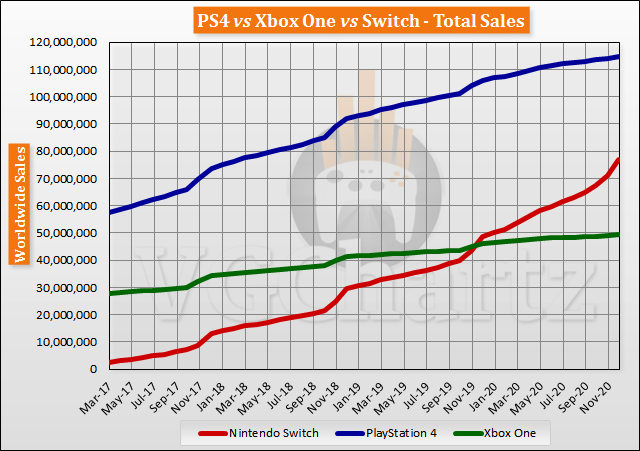 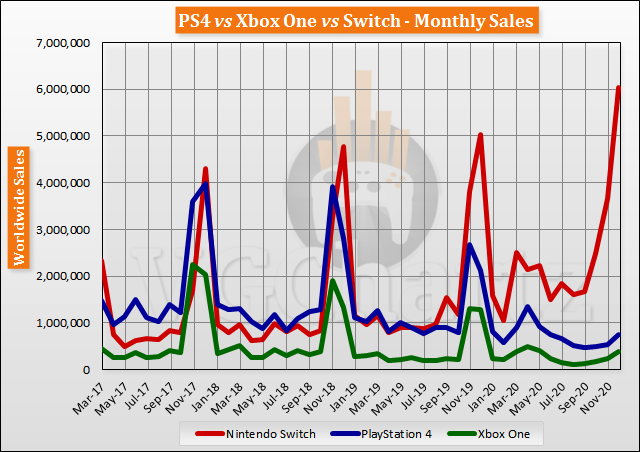 Looking at the marketshare, the Switch managed to achieve 84.0 percent of the monthly sales. The PlayStation 4 accounted for 10.5 percent of the consoles sold, and the Xbox One 5.5 percent.

And to think 2021 might be the Switch's peak year.

Nintendo doesn't even need a pro at this point

I never thought they would, honestly. It's too late anyway. The switch will be entering year 5 in March. I still see a "new" nintendo switch possibly this year. But if sales are staying up for the first few months of this year, maybe the first half of next year. If they wait until next year for a "new"/i revision, I think they'll push the next switch until 2024 though.

Guessing this might be one of the last monthly comparisons between the switch and the gen 8 consoles. December is very telling. Sony and MS are still supply limited, but gen 9 is finally in full swing.

Ps4 December did about as well as January 2020. And xbone December didn't even reach switch's lowest month ever. They'll keep selling as long as they're produced, but it won't very informative data going forward.

I'd say either include ps4 and xbone in charts going forward, or just do the gen 9 charts from now on. As I said, stock is still a limiter for sony and MS, but it's at least a fair comparison between the modern systems.

Eyes on the horizon. Sony ain't worried about this out dated 8th gen chart lmao

You're seeing the Japanese chart's right ?

You seen the global charts right?

You're not that smart are you ?

Why are you making things all personal? I can say the same for you but I'll keep things respectful.

Who said anyone was worried?