If you have any affinity for cinematic platformers — Another World, Flashback, Blackthorne, etc. — you should add the upcoming Olija to your wishlist. Thanks to its movie-like cut scenes and raster graphics, it immediately brings to mind those classics from the early to mid 1990s. Yet, after playing the game for a few hours, I can safely report that Olija is not exactly a cinematic platformer. It doesn't focus on trial-and-error gameplay or lean on realistic physics; in fact, the hero Faraday can fall from great heights without suffering a scratch. In truth, the game is — at least so far — a successful blend of cinematic, nostalgic presentation with swashbuckling, action-adventure mechanics.

Much of the story of Olija is still obscured after my short time with the game, but the basics are clear. A sailor named Faraday is shipwrecked in the strange land of Terraphage. There he seeks out fellow castaways to escape the hostile country and return home. Along the way he encounters unusual characters, hostile monsters, and an enigmatic woman named Olija, who appears to be royalty of some kind. There's an interesting "east meets west" vibe to the proceedings, with nods to both European adventure literature and Asian fantasy. 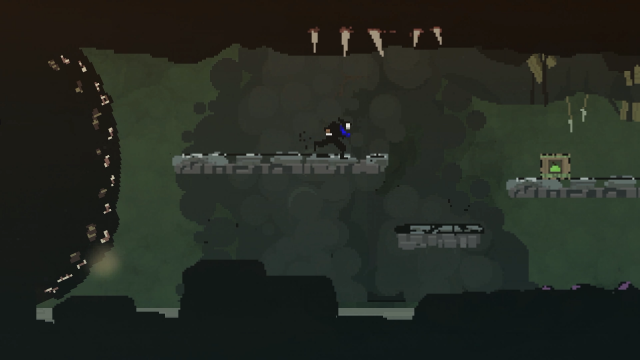 I originally expected Olija to be a linear affair, but was pleasantly surprised to find a hub area: Oaktide, a ramshackle shanty town occupied by other jettisoned sailors. As I moved through the game, I often returned to Oaktide, to trade resources to the Hatmaker for unique hats that grant combat perks, chat with rescued survivors, or upgrade my health. It's not a huge hub and your options are limited, but it makes a difference. It's a reminder of your growth and progress, and a distraction from the main quest.

That main quest will bring you to several islands in Terraphage, each with platforming challenges, hidden trinkets, puzzles, and combat situations. So far, everything has been enjoyable, if a little uncomplicated. I haven't lingered on a puzzle for long, or found myself stumped by a dead end. Combat, too, is on the straightforward side, although I have noticed enemies becoming tougher and more organized.

The most unique element of combat is the harpoon, a legendary, magical artifact Faraday uses for puzzle-solving, locomotion, and fighting. He can fling the harpoon at items and enemies and then warp to them, making combat more dynamic and strategic. If you mix a harpoon teleportation into your attack combo, for example, your final strike will be extra powerful. I've yet to see how (or if) developer Skeleton Crew Games will fully take advantage of these harpoon mechanics, but I like what I've seen so far.

Indeed, I like everything I've seen in Olija. My only request: more of it. Hopefully, as the game unfolds, there will be more destinations, more secrets, more characters and side quests on Oaktide, and more opportunities for tactical combat. So far, the game is quite good. With additional content and depth — perhaps yet to be seen — it could be great.

Stay tuned for our full review of Olija. The game launches January 28 on PC, PS4, Switch, and Xbox One.