Phogs! isn't a great game — or even a good game — but it's impossible not to like. Set in a magical, dreamlike world and featuring two cute canine co-stars, it has charm and whimsy to spare. It also has a pleasantly surprising number of levels and collectibles, and support for two player co-op, both online and offline. Yet for all its cuteness and content, this 3D platforming-puzzler falters in one essential category: controls. Due to wobbly physics, an atypical control scheme, and some slippery movement, Phogs! frequently works against itself.

There isn't much of a story in Phogs! until the very end. The game stars two dogs — well, one dog, really, with two heads. One end has a blue collar and the other a red collar. Imagine a dachshund with no legs, and a second head where the tail should be (trust me, it's less creepy than it sounds). From a hub world, the two-headed doggo heads off to three enchanted worlds, in an attempt to open a mysterious seal back in the hub. Only at the end of the final level will you understand the dog's mission, and it's very heart-warming. 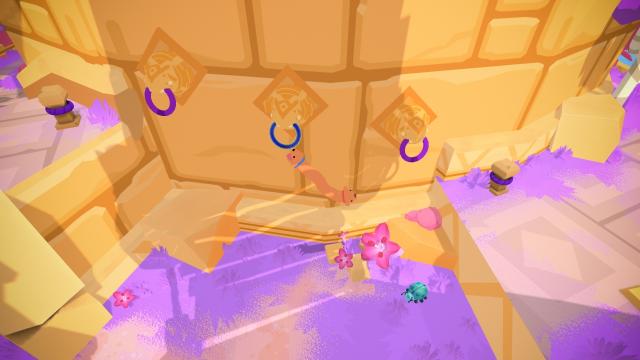 Without much narrative tissue, Phogs! relies on its levels and goals to hook players. For the most part this works. As mentioned before, the game surprises with the amount of content on offer. There are 23 levels in total, spread across the hub world and three themed outer worlds: Food World, Sleep World, and Play World. Every one of these three themed areas has seven stages apiece, including a boss "battle". They also act as sub-hubs, each with a shop and a hidden item. It will take you approximately eight hours to beat them all, especially if you're going for 100% completion.

To get that elusive 100%, you'll need to sniff out 77 dog bones and 23 rocket-shaped "boingles", hidden among the game's levels. Some are tucked out of view, others you'll earn by bringing a nearby item to a needy NPC. Any discovered boingles will return to the hub area to hang out, while bones act as currency in the game's shops. Here you can purchase up to 41 different hats: pirate hats, knight helmets, toadstools, chef hats, etc. 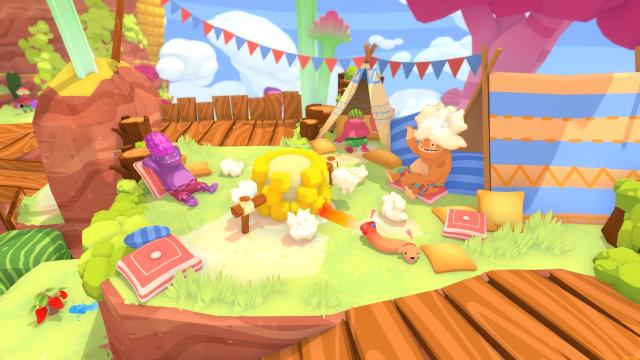 The game's hidden collectibles add to its replay value and, in general, make everything more enticing. Instead of breezing through each stage, you can explore off the beaten path for bones, boingles, and a few other secret items, like three paintings and a couple of trophies.

The collectibles are especially important because the levels themselves aren't particularly challenging. The game's physics-based puzzles are mostly straightforward — ideal for a casual weekend of low-stakes gaming but not stimulating for platforming-puzzling veterans. That said, Phogs! does dabble in some creative mechanics. In Play World there's a section where you can freeze the dog in a number of shapes to move forward and in Sleep World the items floating inside NPC dream bubbles become real-life bridges and doors that allow or block forward progress. In one level there's even an item hidden in the reflection of a mirror, in what must be an homage to Super Mario 64. Still, for all their cleverness, these situations are rarely demanding. 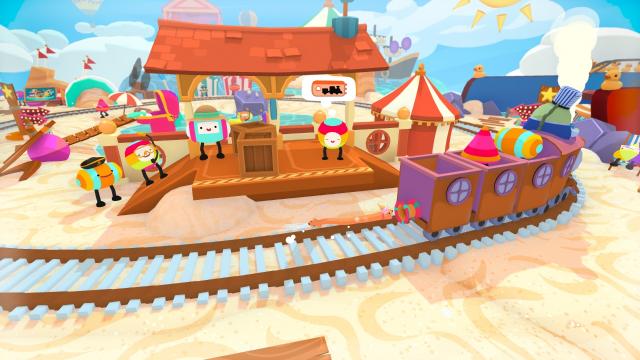 Although the game's puzzles and platforming challenges aren't demanding per se, its control scheme and physics end up making everything more difficult than necessary. While playing in single player mode, you'll control both dog heads at once. The left stick moves the blue head, the left bumper barks/grabs hold of items, and the left trigger extends its neck. The right stick, bumper, and trigger do the same for the red head. So, you'll need to move both ends of a single entity in tandem, grabbing items, moving in unison, and stretching/unstretching at the right moments. It's a little like rubbing your stomach and patting your head at the same time: doable, but not exactly natural.

Playing with a friend in local or online co-op mitigates this issue, but introduces a problem of its own: solving puzzles and platforming when two human players each control one half of a conjoined character. Even with simple demands, it's difficult to synchronize. You might end up barking at your co-op partner, and not in the cute doggy way.

Whether played solo or in co-op, the game's slippery controls and wobbly physics translate into some frustrating bits, particularly when you need to swing across moving wheels or contort the dog into specific shapes. In some situations you'll even find yourself stuck in the level geometry. Thankfully, developer Bit Loom Games added a respawn feature in the pause menu for these rare occasions. 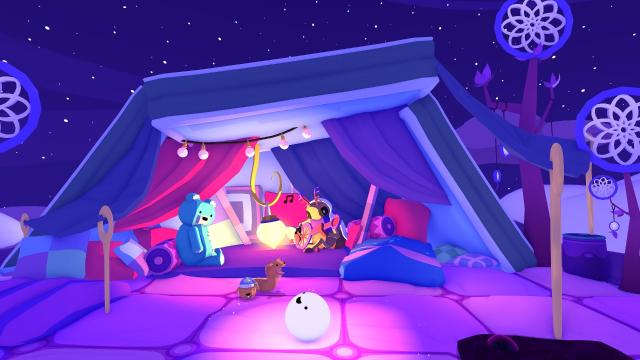 In terms of production design, Phogs! hits the right notes. It's filled with weird creatures, fantastical worlds, and friendly NPCs, some of whom will even pet you if you stop by for a visit. The low-texture graphics aren't great, but the art direction makes up for it. Music is fine, if forgettable.

Phogs! is a likable game, even if it's not a good one. It's charming, colorful, and endearing, and its two-headed hero is endlessly adorable. Unfortunately, straightforward puzzles and challenging controls (it really should be the other way around) undermine its positive attributes.

This review is based on a digital copy of Phogs! for the XOne

This is a solid and charming familiar game. Simply and solid fun. I really enjoy the game with my 6 year old daughter. We dont find problems with the controls and the simply puzzles were fun. I personaly give this game a 7.