Tweet
by Daniel Parker , posted on 20 December 2020 / 3,118 Views
Despite attempting to fill the void left by the lack of any new games in the Mega Man X series, Android Hunter A, unfortunately, falls short in every single category. From poor level design to abysmal visuals, a forgettable soundtrack, and gameplay that's far from perfect, there's little-to-no reason to play Android Hunter A. It's not a worthy replacement for the Mega Man X series, or any other side-scrolling platformer series for that matter. 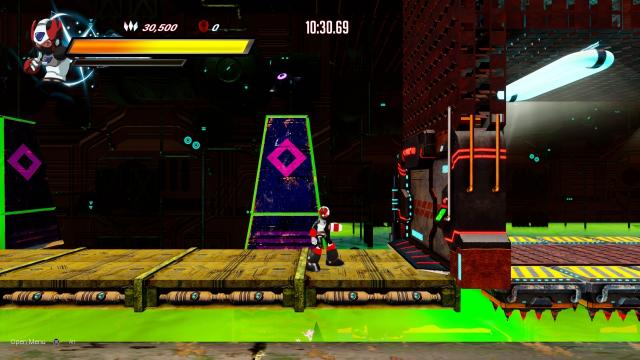 In fact, it's such a bad experience, it made this former backer of Mighty No. 9, Mighty No. 28688, finally pick that game up, four years removed from its release date, just for the sake of comparing it to this title.  As bad as Mighty No. 9 is, it's still clearly better than Android Hunter A by a long shot. And with so many options when it comes to Mega Man platformers, such as the classic Mega Man, X, and Zero series all being available on modern hardware, the genre is actually quite tightly packed with games that get the formula right already. When it comes to newer releases, Mega Man 11 is still the best offering on the market.
The game makes an immediate bad impression with its visual design. In fact, there isn't a single level in Android Hunter A that carries itself on its art direction. Many of the metal surfaces have rusted blurry textures applied to them as if they were supposed to be placeholders until the game's artist(s) finished making the assets. It makes Android Hunter A look like it was pulled from an old PC from 1998, as surfaces are nothing more than a collage of unattractive browns, grays, and blacks. 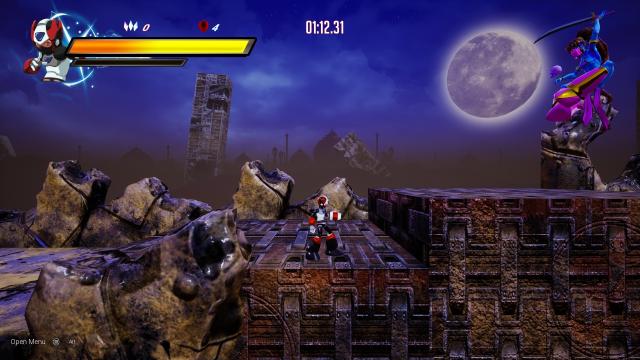 What really hurts the game beyond the graphics or art style, though, is the level design.  For the most part, you'll run to the right, drop down, then run to the left.  Many of these screens are empty and there's not much platforming to be had; you'll just see the occasional enemy to fire at.
That isn't to say there's no platforming.  However, when Android Hunter A decides to try its hand at platforming, it over-does it and quickly becomes repetitive, throwing the exact same obstacle at you again and again.  It becomes little more than a test of patience, as moving platforms or spinning saws of death more than overstay their welcome.  Having to maneuver through a one-hit-kill obstacle is fine if it's part of a varied set of obstacles, but having to dodge the same one over and over again, perhaps three and four times in quick succession, is a chore. 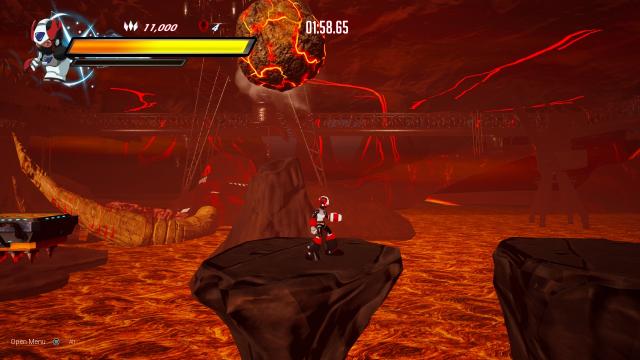 As a shameless clone, many common obstacles you come across in the X series are found in this game as well.  Things like the elevator section from The Skiver's stage in Mega Man X5 (I know the translator for X5 changed all the boss names, but you'll have to excuse me, that's how I've known him since the game released); the ice slope section from Mega Man X4's Frost Walrus stage area 1, with the falling icicles; and the ice block sections from area 2, to give a few examples.  As I noticed these homages, I knew that there had to be a Compactor somewhere in the game, and eventually I came across that too.
All these little things would perhaps be fun to spot in a well-executed Mega Man clone, but what definitely isn't fun is the way they're implemented in Android Hunter A.  Naturally, this title includes its own equivalent of the ride-chaser areas, but here they're the absolute worst part of the game.  You cannot properly turn into corners; crashing into roadblocks will instantly kill you; and momentum is based entirely on your speedometer, so that when you dislodge yourself from a railing you've hit, if you've been holding the accelerator the entire time you'll fly out, going at max speed... into the rail on the other side of the road.  It's all so laughably bad that it'll leave you wondering how it made it into the final product.  Words alone cannot explain just how flawed this section is, so here's a video:
The homages don't end there.  Various enemies also take inspiration from the X series.  The walkers from the intro stage of X1, the leg-less bots from the intro stage of X6, and the spiked wheel enemy from every entry in the X series (except X6) are present as well.  The Legends series appears to have left its mark too, with some of the enemy designs in Android Hunter A taking after the Hanmuru Dolls in Mega Man Legends and the Poh from Mega Man Legends 2.  Even though the enemies themselves don't look very good, nor behave like their source material, it is at least nice to see such a wide range of them, so you're not looking at the same one or two enemies throughout your playthrough of the game.
Another area that's not a total loss is the overall player controls.  Comparing it to the X series, it's by no means perfect: charged shots are cancelled out if you have more than one on the screen, and never pass through enemies; you cannot buffer the down button while in the air to duck the instant your feet touch the ground; and using dash-jumps off of walls feels very inconsistent and broken because pressing the jump button too soon will cancel the dash, which kills your wall-jump momentum.  But dashing through areas and firing at enemies doesn't feel too bad, as long as there are no walls around.  So even though the controls aren't perfect, they function just about well enough that it kept me playing. 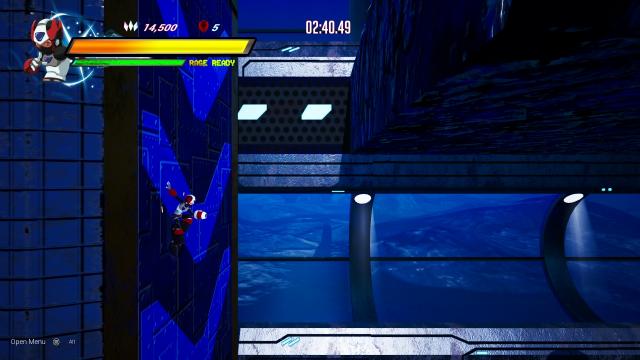 In most Mega Man games, defeating a boss grants you new abilities.  That's true here too.  However, I was able to beat each of Android Hunter A's eight bosses without taking the time to figure out their weaknesses.  Only one of the eight bosses gave me even the slightest trouble, but even he was easily exploitable by jump spamming against a wall and firing charged shots.  The game's final boss, Karna, is a massive difficulty spike in comparison to everything else in the game, though.  This, coupled with the imperfect controls, is what forced me to experiment with the special weapons, but some of them seemed to not work at all, for some unknown reason, and none of them were actually useful against Karna.
Because of how bad the game's AI and level design are, there's no need to use any of the special weapons.  You can use their abilities to access new areas within stages, and there are various friendlies to rescue, like in X5-X7.  However, this particular feature in the game just gives me flashbacks of rescuing all 128 injured reploids in X6.  Android Hunter A doesn't even have a system in place to reward you for rescuing the injured like X6 did, and there's no penalty for leaving them behind either, so there's no incentive to go to the trouble of collecting them, besides an unlockable achievement.  Perhaps unlocking additional character customization items could have served as a worthwhile incentive for rescuing allies. 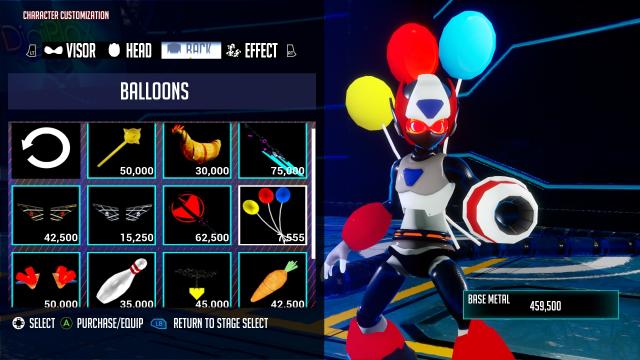 In a move that is seemingly inspired by the Tekken series, you're able to customize your character with various cosmetic add-ons, some of which are similar to those found in Tekken 7, such as balloons and teddy bear items.  These allow you to change your visual appearance in the game as you play through it, although to be honest there don't seem to be any must-have items that you'll really want to use and the feature itself is far less robust than the ones found in recent Tekken entries.
Finally, the game's story presentation is so badly pieced together that it actually makes the narrative hard to follow.  Amber, the game's Navigator, does her best to be just as annoying as Alia was in X5.  Although the gameplay isn't paused while her text window is on screen, it obscures the life bar, so you're not going to want to read anything she has to say.  Every other instance of a character speaking is shown at the bottom of the screen with one line of text displayed at a time, but without any name indication.  The text does at least change color to show who's speaking, but it still isn't easy to follow.  The narrative, and the game in general, just isn't interesting enough for the player to really care that much about what the main characters are fighting for. 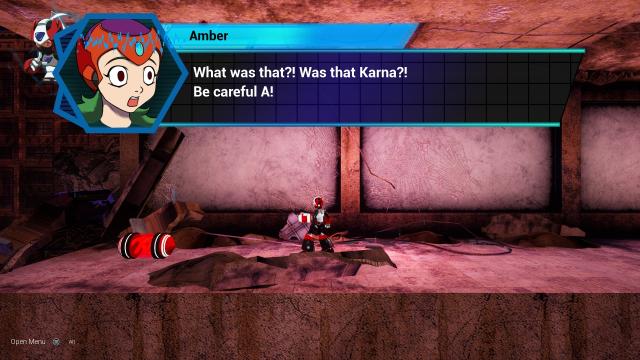 Android Hunter A is a very flawed clone of the Mega Man X series.  It somewhat manages to get the basic gameplay mechanics right, but they're never put through their paces in enjoyable or interesting ways.  Almost everything else, from the level design, to the art direction, and enemy AI are all bad, with the game's only other redeeming features being the level select music and, perhaps, the ability to add customization pieces to your character model.  Even the main character has a letter for a name, just like Mega Man X.  In X's case, it's a variable for unlimited potential, but it's left unclear as to what the A stands for here.
In closing, Android Hunter A honesty makes Mighty No. 9 look like a work of art.  If you find yourself needing to play a new Mega Man X style of game, Android Hunter A is decidedly not the one to pick; stick with replaying the Mega Man X Legacy Collection instead, or if you're really looking to torture yourself you can purchase the Mega Man X Legacy Collection 2, load up Mega Man X7, and rescue 64 injured reploids.  Even that's better than what's on offer in Android Hunter A.

This review is based on a digital copy of Android Hunter A for the PC, provided by the publisher. 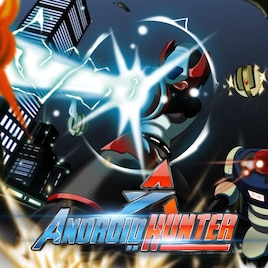