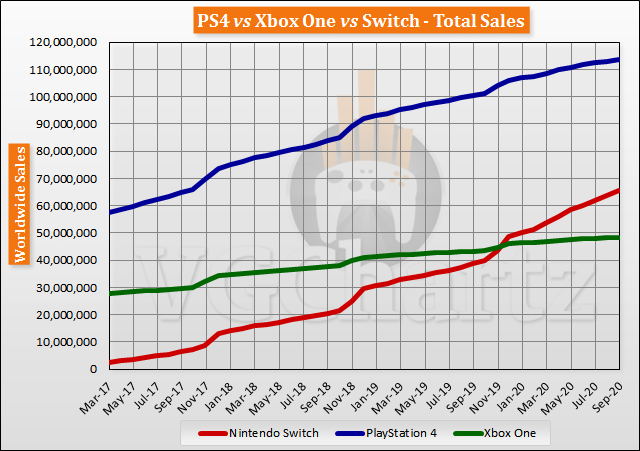 Looking at the total sales of the PlayStation 4, Xbox One, and Switch through September 2020 shows the PS4 is currently ahead of the Switch by 47.99 million units and ahead of the Xbox One by 65.36 million units. The Switch has outsold the PS4 in every month since the middle of 2019. 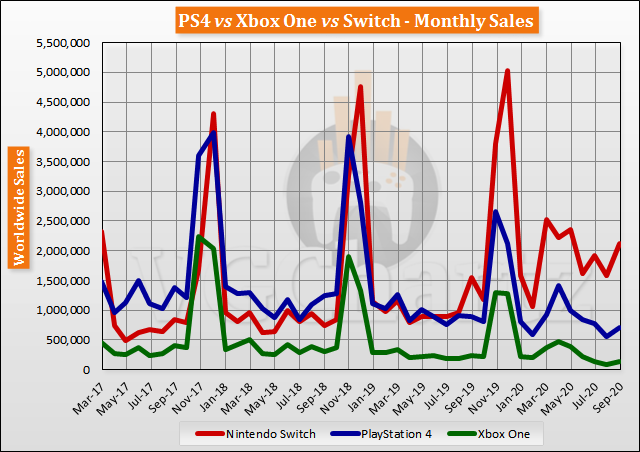 Looking at the marketshare, the Switch managed to achieve 71.4 percent of the monthly sales. The PlayStation 4 accounted for 23.8 percent of the consoles sold, and the Xbox One 4.8 percent.

XB1 is done for when Series X/S launches.

The switch is just operating at another level right now. I hope it reaches that 30 mil so it can have the best year of any console ever and if possible, I hope it outsells DS and PS2

Yep, a more successful platform is better for everyone. We get a longer lifespan for the console with more AAA game releases, we don't want a Vita or Wii U situation where both Sony and Nintendo gave up on in in only 2 years and we mainly got shovelware filler for most of their lifecycle. Better sales also mean more friends to play with online, far more 3rd party support, ect....

For an old timer Sony PS4 is still holding onto its market share. Very impressive Sony ;') Nintendo Switch will still outsell the PS4 but by then ... the mantle will be passed off to the Sony PS5. Nintendo vs Sony 2021 will be insane.

I absolutely love the idea of staggered generations where Nintendo and Sony alternate. Switch and PS4 are probably the best overall consoles of all time (I'm not even hesitating in saying so) in terms of first party, third party, and indie games, and the only reason I lke the SNES better is because of nostalgia. I'm okay with Sony breaking 100 million, then Nintendo doing the same. Both brands have been great in different ways and aren't directly competing with one another.

@Runa216 Very true friend. I just love seeing all this intenese competition between Sony and Nintendo. Microsoft as well ;) Sony and Nintendo aren't exactly going at each others throat as you said, but still competiting for maretshare nonetheless. Better the sales for both platform holders, the better :D

The thing that always gets to me is when I bring up Microsoft (I criticized them so hard and so repeatedly I got banned from the Microsoft forum on VGC) because, like...what do they even bring to the table. Their exclusives lack character, their business model doesn't benefit them as console manufacturers, and they keep trying to go in directions that people keep rejecting. (But I think we all know the subscription model will be pretty popular going forward). I just don't understand. Nintendo and sony both have exceptional first party lineups with great exclusives and worldwide appeal. Nintendo has the gimmicks, Sony has the power. what does Microsoft have? US-centric marketing, a lack of definable characters outside of Master Chief, limited appeal, and no exclusives.

I mean, I want them do do well, but they just don't have anything that appeals to me!

MS brings actual competiton, at least in the US, keeping sony on thier toes.
we ALL know what happens when companies get arrogent, though at least nintendo keeps making good first party games even when doing questionable things.
that being said, sony is probably currently in arrogent mode, considering some of their actions in the past couple years, so...