There's much to be said about the value of simplicity in games. With so many games today featuring increasingly complex gameplay loops and mechanics layered on top of other mechanics, sometimes you just want a game that you can just pick up and play without having to spent hours learning every tiny little intricacy found within it. Sometimes all you need is a unicycle and a course to race through and perform tricks on.

Uniracers (Or Unirally in PAL territories) was developed by DMA Design, at the time best known for Lemmings and still quite far removed from the day it would strike gold with Grand Theft Auto III and be renamed Rockstar North. It came out at a very interesting and often overlooked time in the developer's storied history, so let's take a closer look at it today and also talk about why the game can no longer be legally bought anywhere. 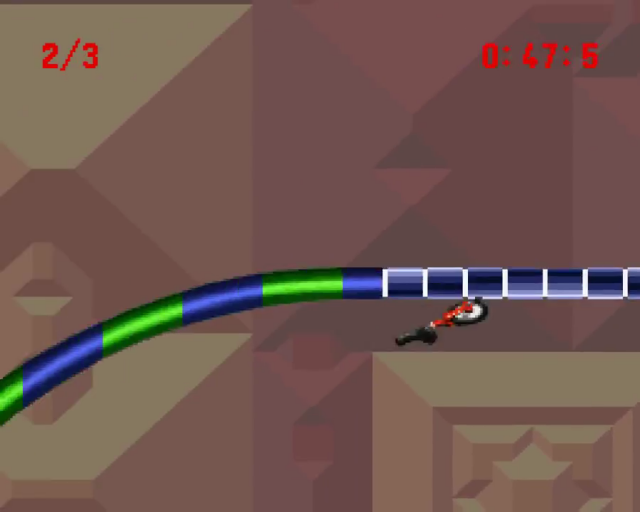 By 1994 DMA Design had already established itself as a talented development studio with several quality titles and one hugely successful franchise behind it. In addition, the developer had just signed a contract with Nintendo to publish its first SNES game, so everything was going very well for the company as it geared towards the release of Uniracers.

Uniracers in concept was a very simple game. At its core it's a 2D racer where the player controls a riderless unicycle across a variety of looping courses, with heavy emphasis placed on performing stunts. These stunts allow the unicycle to move faster and you'll also earn points, depending on the course. It's a simple but rewarding system that makes the gameplay both intuitive and fluid, but has enough depth to keep players engaged even through multiple playthroughs.

In addition, Uniracers has a split-screen competitive multiplayer mode for two players, and a tournament mode that allows up to eight players to race in 1v1 races, which gives the game much of its replay value. Even if the single player modes are fun by themselves, it's the multiplayer that makes Uniracers a true forgotten gem in the SNES library.

Uniracers was originally released in December 1994 in the US, and in April 1995 in Europe, to a fairly positive reception, and it sold quite well early on too. It wasn't going to be a massive hit on the level of Nintendo's heavy hitters, but it was well on its way to becoming a decent seller for both DMA Design and Nintendo. Unfortunately, it didn't take long before the game's legs were cut out from under it by some rather unusual circumstances. 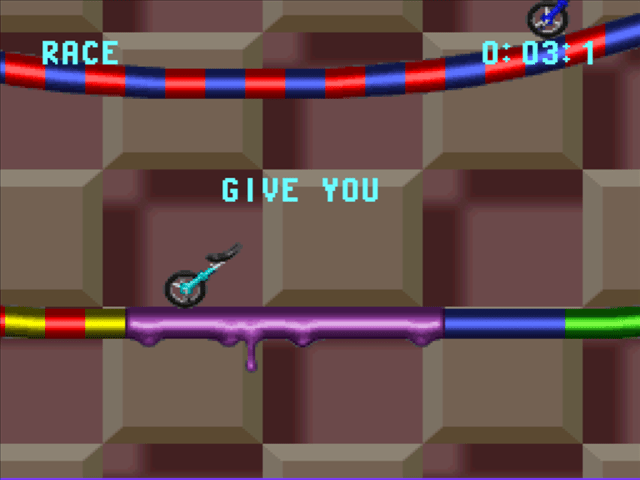 While in most cases the reasons behind a particular game's fall into obsolescence are so varied and numerous that it's often difficult to point to any one point in particular as the main cause, with Uniracers there's no such ambiguity. After its release in 1994, DMA Design was sued over the game and its use of unicycles, preventing any further copies after the initial 300,000 from being manufactured. The company that sued them? Pixar. Yes, the animation studio.

Back in 1987 Pixar had made a short film called Red's Dream, starring a red unicycle, and when the animation studio found out about Uniracers it sued DMA Design for allegedly copying the design and the concept of the unicycle from its short film. Pixar was effectively claiming that it owned the copyright to any computer generated unicycle ever made, and surprisingly the judge agreed. You might think that claiming copyright over the image of a toy invented in the 1800s is silly, and you'd be right, but that's exactly what happened here. 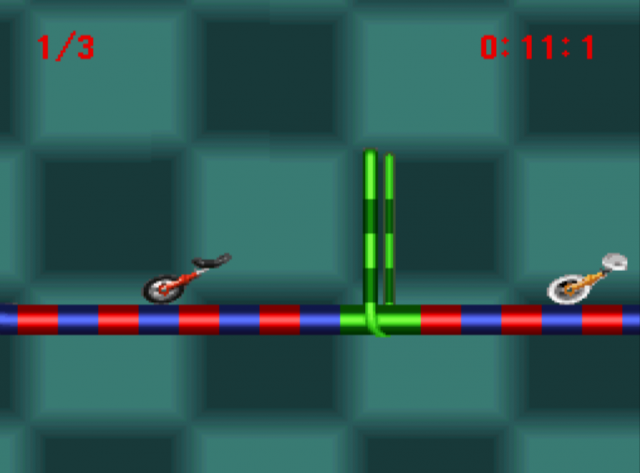 As a result of the lawsuit and the judge's decision, Nintendo was forced to stop producing further cartridges of the game, meaning that only the initial shipment of 300,000 copies was ever sold. This naturally made Uniracers a rarity pretty much instantly, and also meant that most people never got the chance to play it and likely have never even heard of its existence. With all that in mind it's very easy to see why it was so quickly forgotten.

Why Should Uniracers Be Remembered? 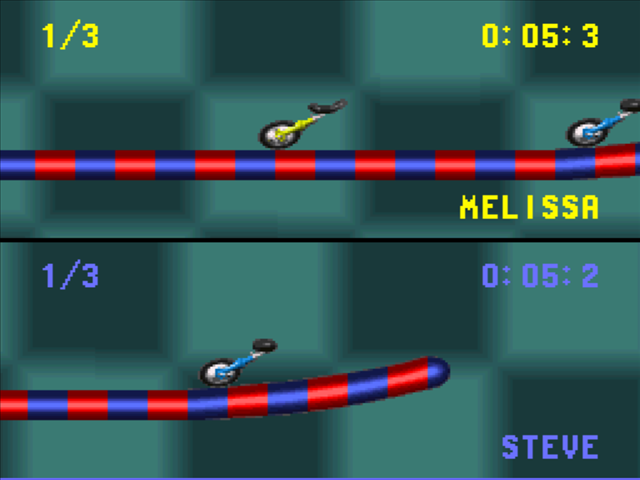 Disregarding everything else, Uniracers is just pure, simple fun. Not every game needs complex narrative strands or deep characters. Sometimes it's enough to just have an engaging core gameplay loop, and that's exactly what DMA Design built for this game. There's something inherently satisfying about pulling off several cool tricks in a row and blasting past your opponent at max speed. The visuals are not among the system's best, but they have a certain simple charm to them that amplifies the old-school, arcade-style feel of the whole game. The soundtrack also has a lot of great classic rock-style tracks.

Of course, due to the aforementioned circumstances, the only legal way to play Uniracers today is to own a SNES and one of the original initial run cartridges. That means that for most people the only practical way to play the game is through emulation, and considering Nintendo's stance on that particular topic it might be difficult to find the game at times. However, it would be a shame if Uniracers was simply lost to time over a petty legal issue from 25 years ago, so emulation is the way to go in this particular instance.

Uniracers may not be a game that will hold your attention for weeks or months on end, but if you're looking for something to spend a few fun hours playing with friends, or you're just looking for a new game to try for yourself, you should definitely check it out. There's merit in simplicity, and when it's done right even the simplest of games can be some of the most engaging experiences you can have. If you missed this one back in the day - and you most likely did - then give it a shot. You might find a new favourite in the process.

I remember playing this game back in the day. I think one of my friends rented it or something. Anyway, good times!

A shame about the absurd Pixar law suit. Seems strange more companies haven't tried the same shit if it works. Konami's Frogger was probably first computer rending of a frog, so shouldn't they be able to stop anybody from ever making a game or animation involving a frog? (or demanding their cut of profits)

Although it doesn't apply to DMA/RS North, I wonder if a non-US developer could have at least continued sales outside the US?

That's an interesting history. I never knew Pixar had forced Nintendo and what would become Rockstar North to cease producing a game.

Def remember this as a kid but never owned it. Nice article.

Had this game as a kid, one of my childhood friends borrowed it and never gave it back...then he moved. Ass hole!! I will find you Eric!!!

I used to ride a unicycle around the block. Completely useless info unrelated to the article, but anyway. 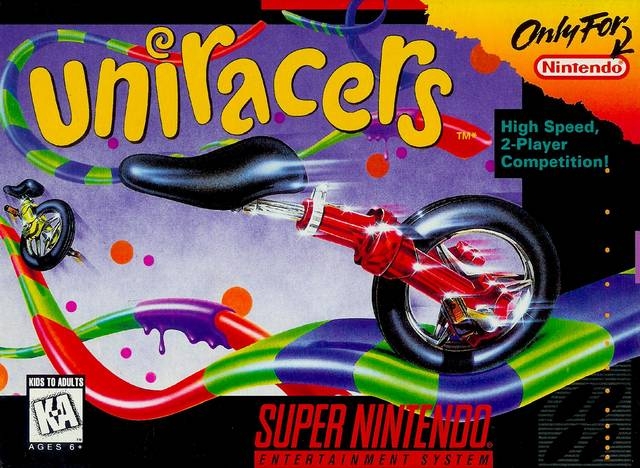