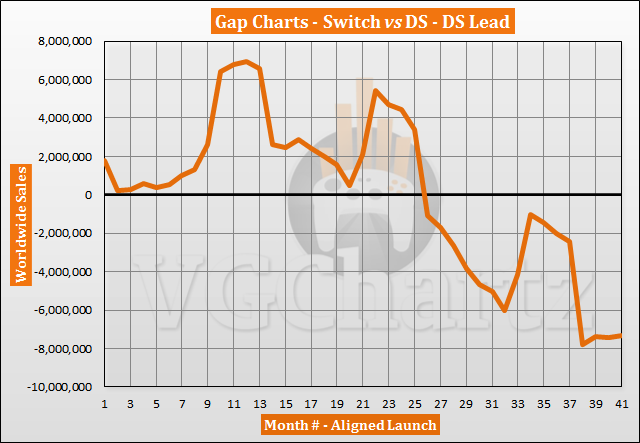 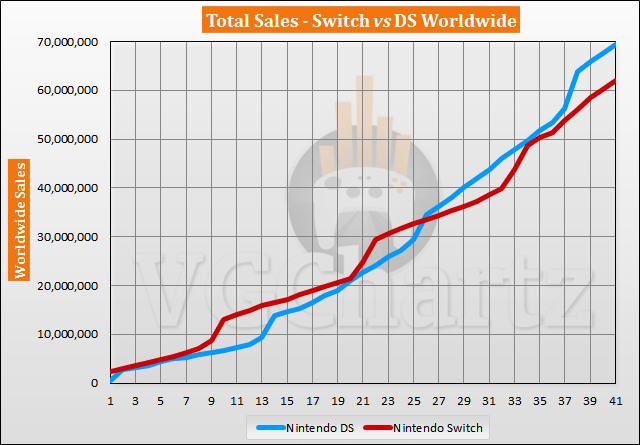 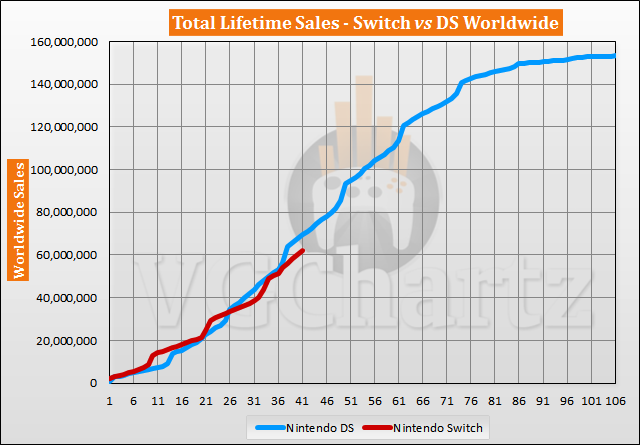 The fact that the Switch is somehow outpacing the prime DS at this time is insane. I remember everyone only a few months ago thought that once this year comes the Switch vs DS fight would be over with the DS killing the Switch in its prime. However, the Switch is proving all of us wrong. We'll have to see if the Switch keeps this up.

Depending on software output, hardware stock and pandemic issues I see a small chance for a cross this holiday season (and a re-cross a few months later).

by this time the ds lite has been out for two years as it came out 2 years after the original model.

The DS Lite was already out for 2 years by this point.

Nobody got the reference :(

If Ninty can and is interested in producing enough switches, I think it can be the closest to beating both PS2 and DS. I don't think it will, but it for sure has more of a potential to do it than even the PS4. And I would love a PS2 vs Switch chart as well

If the switch beat out the DS you would see people go out and buy tons of switches why? Its just like why endgame when it got close to avatar's global dollar amount a bunch of people kept going back to give it the few dollars it needed to be number one. So if the Ds was beaten you might see that where people just buy the system just so it can beat the ps2.

Switch is selling very strong since october of last year so less than a year from now and all of a sudden has more potential than PS4 really ?
Switch is selling like crazy for the past 10 months because of the following reasons:

Selling okayish? Its been selling on par with the ps4 pretty much since it launched

@pikashoe, no it was selling worst than the PS4, the only time it was on par was 2019 until october, which happened because of the weakining of the PS4 sales because it entered in its 6th years and sony had to do a pricecut at this point in time and they didn't. The other is history .. switch lite launched with 199$ pricetag, than the holidays began (this is where nintendo consoles do records) and then this year started with the coronavirus which boosted the already high from the holidays switch sales.

@yo33331, No. It was constantly going back and forth between the PS4. It was a zig-zag pattern that would always change depending on which console was going through a holiday season. Remember, PS4 launched in November, Switch launched in March. So when each system both pass another anniversary, the PS4 has an extra holiday season advantage. But every time the Switch would take the lead with its holiday season, its advantage would get bigger and bigger, then when the PS4 took the lead back when IT got a holiday season, its advantage was getting smaller and smaller. And last FY, the Switch shipped 21.03 million units, which was higher than the PS4's peak FY of 20 million. 90% of those sales/shipments was pre-Covid. Right now, the Switch is selling record breaking numbers, and all it has had is one revision. By this point in the PS4's life (3 years, 5 months) It already had a price cut and TWO revisions.)
And how convenient is it for you that you left out Animal Crossing, which has turned into the biggest killer app since Wii Sports, as a reason for the Switch's boosted sales.

I am not talking about FY or gap comparison article, I am talking for pure number from the launch of the switch until october 2019 by monthly basis. Pretty much every month since 2017 march PS4 was outselling switch by month sales.
The only time switch outsold PS4 was at the holidays, and this ended with the october 2019 and the switch lite for 199$ came, after that came the traditional stronger period for the nintendo consoles in general - the holiday season, after this came covid .. And yes animal crossing is console saler. It also atributed. But my point was that the switch is selling very very good since october 2019 so since less than 10 months now and you are already making predictions that it may beat DS, when in general Switch since it's launch was selling for 2 and half years just okay, a little behind the PS4 by raw monthly basis. around 150-200k weekly, which is not bad but it is not strong either. And now Switch has 2-3 reasons why it sales the way it is selling for the last 10 months and you are already making it DS killer in term of sales. The switch has been so strong only in the last 10 months. And all of those are not normal periods, I mean first was new revision with new low price, then were the holidays, then the covid started and animal crossing launched. Now the covid begins to fade out and within 2 months switch will most likely go back to previous 250-300k levels weekly. And after that next gen starts which will put it back again with around 30-40% of sales gone because of the next gen. Also the switch don't have big games coming for it in the near future. So basically there is no reason switch to continue to sell that well in the future. Yes the holiday seasons are the best for the nintendo consoles but this holiday with the next gen I am not sure how good will be for the switch .. maybe if they price them at 500 or 600$ (way above the switch) then maybe the switch will do very good, but if not I don't see it.

Dude everyone is talking launch aligned sales. Launch aligned the switch was selling on par with the ps4 pretty much since launch and then started to surpass it. Also the switch lite hasn't really sold particularly well. The argument you are trying to make is that the switch in its infancy should have been outselling a console in its prime which is just ridiculous.

PS4 was peaking when the Switch came out. Consoles have lower sales when they enter the market. Should be the same with the new consoles unless there is a second wave of covid or something.

Switch has been on par launch aligned with the PS4 since it launched. Lite isnt the reason it is doing bit at all, Switch lite had underwhelming performances last fall, it just had a lot of stock that didnt sell during the holidays so once the covid affected production lines, the main console available for a certain period was the lite. Then they boosted production and the Switch is back on top by a big margin, even in Japan. Covid boost slowed down for other machines but not the Switch, seems like the main cause for its boost was Animal Crossing after all.
By the way, Switch is reaching 75 millions this year for sure, not "maybe 70".

There is nothing special or big enough coming for holidays on the Switch side...The fight could end after this holiday season.

It's still far too early to say, there's no way Nintendo leaves there Holiday Season with only a Pikmin 3 Port. I'd assume the 3D Mario HD collection and 3D World Deluxe is gonna be there big games this holiday and maybe more we don't know about.

Plus, the DS never had many major Holiday titles either but was still selling like crazy. Also, when we're talking about a system like the Switch which is selling 400K a week and STILL can't meet demand, do you really need a major holiday title?

Oh but there are just two new consoles released in that period, nothing really which can damage the sales of the Switch...

Yeah the power twins literally won't affect the switch that much at all. To that I can attest to with full confidence