Welcome to the first part of a monthly series taking a look at unique or interesting game design. I'll be trying to elaborate on what sets a specific design choice apart, why it does or doesn't work, and what the industry can learn from it. First up, last year's cult hit, Katana Zero.

In a year full of great titles, 2019's Katana Zero perhaps understandably flew under most people’s radars. A relatively low budget, pixel art platformer/slasher from Devolver Digital probably isn’t going to garner mainstream appeal, and it most certainly isn’t where one would expect to find a title with one of the most unique and interesting methods of narrative telling in recent memory. However, if you’re willing to look past its over the top presentation, you’ll find a fascinating blend of story and gameplay that blurs the line between the two and provides a spectacular example for how to harmonize these concepts. 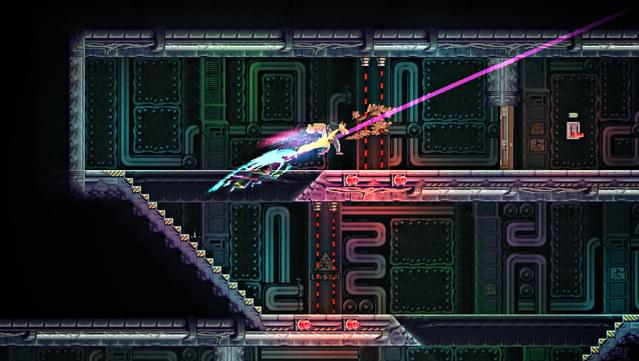 At a glance, Katana Zero invites numerous comparisons to Hotline Miami, with its color scheme, pixel art aesthetic, soundtrack, and everything-dies-in-one-hit gameplay loop. If you stopped at that initial look, you could easily be forgiven for believing that Devolver Digital just transposed Hotline Miami into a sidescrolling format, added some more katanas and called it a day. Levels consist of moving between a series of rooms and picking off enemies quickly and carefully, with some slower, story focused segments in between to provide more context to the world. Both games even play with the concept of drug usage by the main character, although Katana Zero’s narcotic of choice, Chronos, has a much more stated and significant role.

Get past these surface level similarities, however, and you’ll find a notably different experience, one with several extremely unique elements that make it worth examining in its own right. Perhaps the most immediate distinction between the two games is the inclusion of a bullet time mechanic in Katana Zero. The protagonist, Zero, can slow down time at any point to better react to enemies, and make it easier to parry incoming gunfire or time a precise roll. Your time slowing abilities are finite and have to recharge over time, however, and given that each room has a time limit of its own you often can’t simply just wait for it to recharge. It encourages the player to make good use of a limited resource. 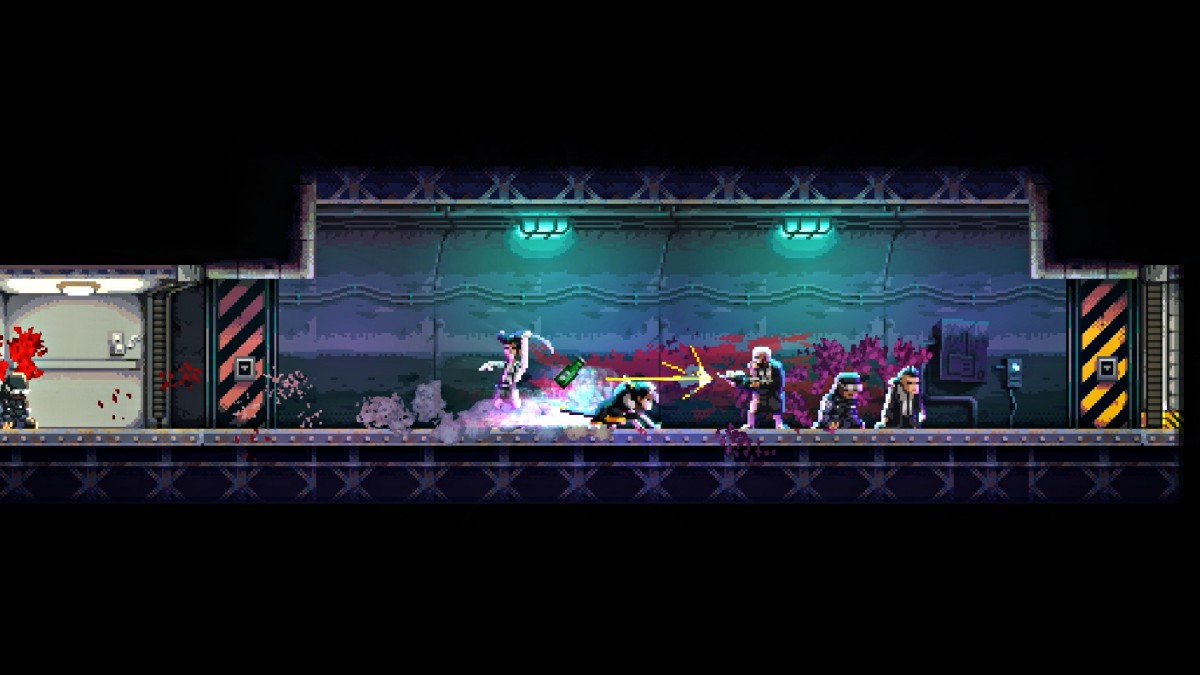 But bullet time is by no means a mechanic exclusive to Katana Zero. What starts to make Katana Zero stand out as a unique title is the framing of its slow motion mechanics. After every cleared room, the game shows the player a replay of their actions, except in full speed; without any of the slow down that the player used. It’s a very simple touch, but it goes a long way towards showing how strong Zero is, rather than simply telling us. Playing through a room is satisfying in its own right, but then getting to watch yourself tear through a room, deflecting bullets and slicing guards to pieces effortlessly without displaying the slow motion crutch you used, goes the extra mile to emphasize just how powerful Zero appears to everyone around him.

By itself, this might simply be an interesting gameplay touch that adds a degree of satisfaction for players who wish to bask in their power. But Katana Zero goes the extra step to connect this to its overarching narrative with how it contextualizes its slow motion, failure, and even its entire core gameplay loop. The aforementioned Chronos that Zero takes is not just a story element; it’s the framing device by which the entire gameplay operates off of. Zero takes this drug partially to survive, but also because it makes him an almost unstoppable assassin by giving him the ability to peer a short way into the future. Chronos allows Zero to see what will happen if he undertakes specific actions, and how enemies will react. The narrative implication then is that you never directly control Zero when fighting; instead, you’re simply planning out what he will do, and all of your failed attempts are contextualized as Zero looking into the future and realizing that various plans of attack will result in his death. Meanwhile, the full, no slow motion run you see at the end is Zero actually pulling off the successful run that you planned out. 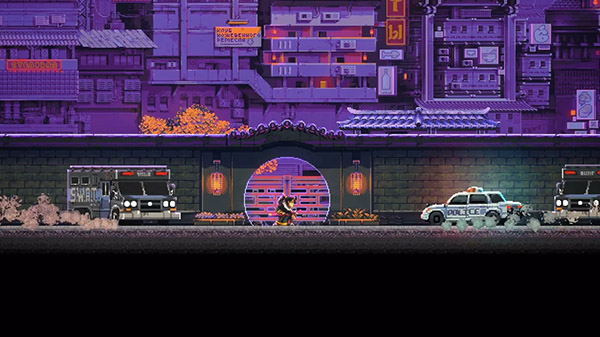 It’s a simple, yet extremely effective way to integrate story and gameplay. The plot of Katana Zero revolves heavily around Chronos and how it affects Zero, and we’re constantly reminded of that by the gameplay, where the player makes use of a time slow mechanic and the game constantly reinforces that our failures are merely peering into possible unsuccessful futures. The story serves to compliment the gameplay in this way, providing context to “death” and allowing for some interesting narrative twists later on.

This is where Katana Zero really shines through. On its surface, and indeed, during the first couple of levels, it might just seem like dumb fun. Get past the introductory phase, however, and you’ll find a title that manages to carry some very weighty themes while still maintaining the frenetic nature of its moment to moment gameplay. I mentioned that the story compliments the gameplay, but perhaps what separates Katana Zero from other titles with complex narratives is that the gameplay returns the favor and builds off established narrative elements to compliment the story as well. Without wishing to spoil, as the game goes on, certain parts of it slowly become more surreal, reinforcing later narrative developments about Chronos and its effects on users. It becomes difficult to imagine Katana Zero's gameplay removed from its story, and vice versa. The two are integral to each other.

This is the sort of thing that games with lofty ambitions for storytelling should be doing more of; looking for ways to intertwine their gameplay and narrative. Video games provide an exciting alternative to traditional storytelling because they are interactive, and having an active participant in the plot rather than a simple observer (like in a book or movie) opens up a number of unique storytelling possibilities. To be fair, Katana Zero is by no means a perfect example of interactive storytelling. Its narrative has some holes and leaves quite a few questions unanswered, among other things. But it does an exceptional job of making its gameplay and story feel like they are both contributing to some greater whole, rather than simply co-existing in the same package. It’s impossible to take Katana Zero’s story out of its gameplay, and vice versa. And as games seek to tell complex narratives with deep themes, it may be worth embracing more of what defines them in a unique manner and seeking to reconcile gameplay and story in meaningful ways. For all its faults, Katana Zero is a spectacular example of a game that blends its gameplay and story into a seamless whole, and winds up being an experience greater than the sum of its parts as a result.

Great article! The idea of gameplay-story integration in Katana Zero reminds me a bit of Prince of Persia: The Sands of Time. In that game, each missed jump or premature death is treated as something as a non-canonical alternate reality. The Prince, once sent back to a checkpoint, will even say something to the tune of "no, that's not what REALLY happened". It's another interesting example of a player living out the story while playing.

I think your article and videogamedunkey's 2019 video are the only spots I frequent that even touched on this game's interesting loop. It's basically like all your failures are the equivalent of Doctor Strange's future-reading in Infinity War, only more limited. I sometimes think back on games' clumsy handling of player damage/death with Uncharted and how a ND designer brought up that damage Nate takes correspond to "luck" instead of getting shot each time. Kudos to this team for contextualizing fail states in this way. Good read, Paul.

I can't wait to pre-order my physical copy.