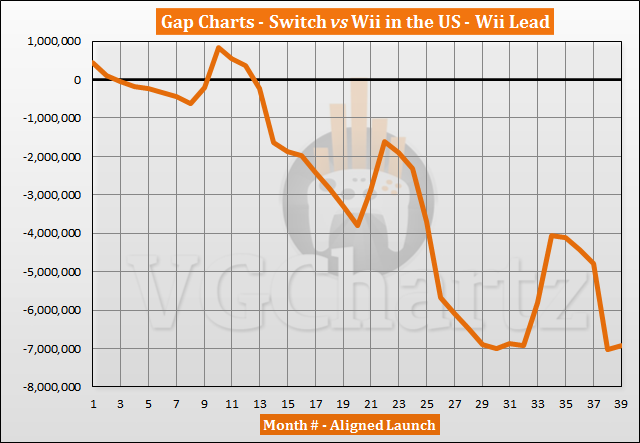 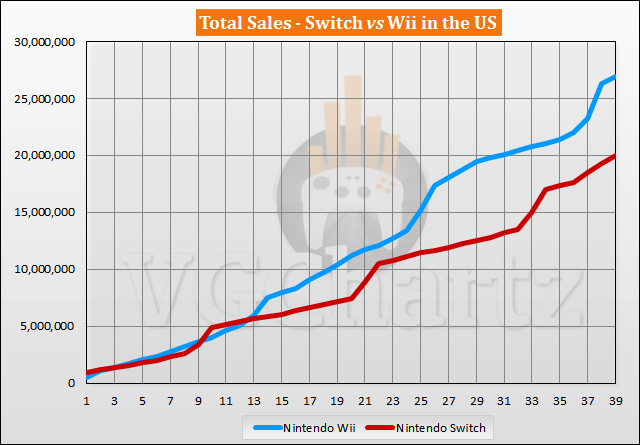 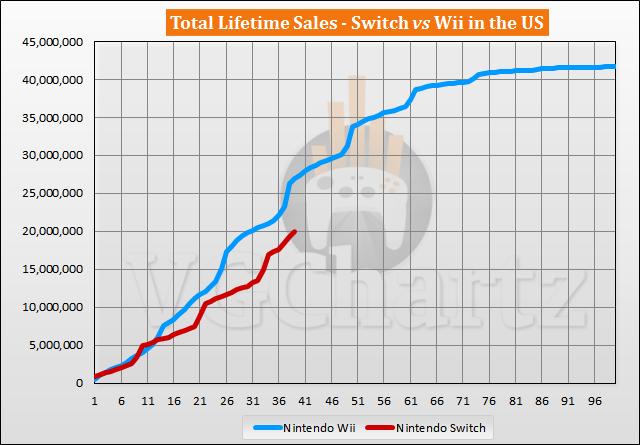 May 2020 is the 39th month that the Nintendo Switch has been available for. During the latest month, the Switch closed the gap by 100,015 units when you align the launches of the two consoles. In the last 12 months the Wii has outsold the Switch by 820,886 units. The Wii is currently ahead of the Switch by 6.92 million units.

The Wii sold 41.70 million units in the US during its lifetime. The Switch needs to sell another 21.72 million units to outsell the Wii.

It's still very possible the Switch could comeback to the Wii's U.S & Europe sales when all said and done. The Switch 3.25 years into it's life cycle and is still peaking and it's continuing to show YoY growth, if the Switch peaks this year selling around 21-24M it's gonna take another couple years for Switch sales to stop at a halt and would end up outselling the Wii, since the Switch's peak and decline happened later than the Wii, making the Switch's sales lifecycle longer.

The Wii on the other hand already started declining YoY 2.25 Years into it's lifecycle and for most quarters after that they continued seeing YoY declines and the Wii's sales dropped quick as a result of an early peak. The Switch is gonna peak later than the Wii, which shows that the Switch's lifespan is likely going to be far longer.

Also Switch is essentially a handheld, which makes it more likely for households to own more than one Switch, and the Switch's main innovation and selling point of being a hybrid home/portable console with detachable controllers is a concept that'll never get old for people like the Wii's motion controls.

While the Wii is currently outpacing the Switch in Europe and the U.S, all other factors point to the Switch eventually closing in on the Wii's sales in those regions and potentially surpassing it. Adding Japan's crazy sales in the equation, it seems likely the Switch will outsell the Wii worldwide, I'm predicting the Switch to sell near Gameboy like numbers between 110-120M units worldwide.

I actually believe the switch has a shot at 25mil+ this year and overall between 130-140mil. Let;s see which one of us is right. I'm hoping both of us are wrong and somehow switch sells more than 140mil but that's a long shot

Looking back at the Europe graph after this one, maybe the Switch can surpass the Wii in both after all. I thought the gap was bigger but it is achievable i think. The Wii is slowing down already but it will freefall in in a couple of months.

I still think switch will have very similar number compared to Wii, 95-105M, perhaps a little more, but most likely not crossing 110M.

Switch will be at around 70 millions at the end of this year with no price cut, huge titles on the way and maybe a new model coming. Nintendo said we are entering the half of the lifecycle, which could be there could still be around 4 more years. I don't think they will only sell 30-35 millions in that time knowing what i said earlier and it will likely sell 23-24 millions this year. It probably won't fall under 18 millions next year putting close to 90 millions with 2 more years to go. Make it drop like a rock with 13 and 8 millions and the Switch still end up somewhere in the 110s with maybe a couple more millions after the next console.

That is a weird assessment considering the switch has outsold the ps5 so far and is a holiday season ahead at this point, breaking the double helix. What makes you think it won't follow the sales pattern of the PS4 where it sells decent everywhere for a family long time and then bonkers in one region. The switch will dominate japan as long as it's successor doesn't come, just like PS4 is dominating Europe. And it will sell pretty decently everywhere else. I think the switch will sell more than the PS4 in 7 years and maybe altogether. But if the PS4 has a sort of uphill battle right now to upstage the switch, what makes you so sure the switch will suddenly be cut off?