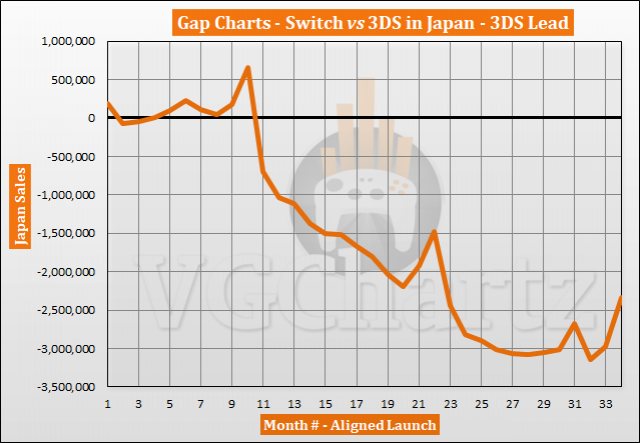 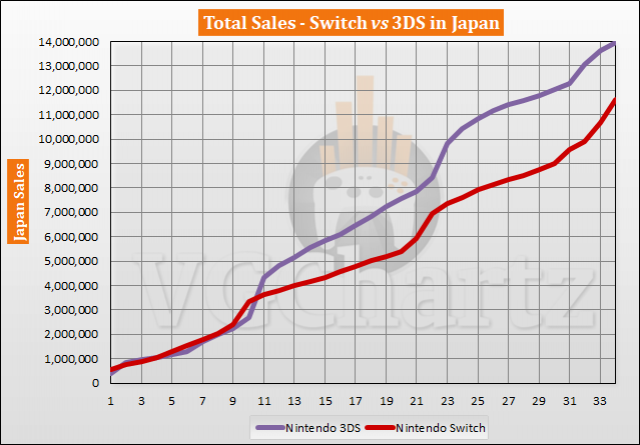 December 2019 is the 34th month that the Nintendo Switch has been available for in Japan. During the latest month the Switch closed the gap to the 3DS by 636,685 units. In the last 12 months, the 3DS has outsold the Switch by 858,657 units. The 3DS is currently ahead of the Switch by 2.34 million units.

The 3DS launched in February 2011 (however, 3DS sales have been aligned to March 2011, since it only launched at the end of February in Japan) and the Nintendo Switch launched worldwide in March 2017. The Switch in its first 34 months has sold 11.63 million units, while the 3DS sold 13.97 million units.

The 3DS has sold 24.59 million units lifetime in Japan through December 2019. The Switch is currently 12.96 million units behind the lifetime sales of the 3DS.

I enjoyed our discussion about whether or not the Switch could get within a million units of 3DS (2013) vs Switch (2019).

I still remember when everybody said that the Switch couldn't possibly beat the 3DS in Japan...

Switch will start to close the gap for here on out.

Switch Lite has turned things around for this trend. Let's see if Switch can catch up here. Looks promising.

Well, Nintendo did have to cut 3DS price and sell it at a loss to get these numbers, not to mention that Switch is handily beating the 3DS worldwide, even if it's not in this region. So... the 3DS was a success, but not as massive, no.

This is literally a chart showing the Switch is not winning. There's no home console at all. It really is bizarre talking to people around here, up is down and down is up? Do you think all the Playstation users are hoping for Sony to increase prices and lower the performance of their hardware? That seems to be what Nintendo defenders want nowadays. I'm Nintendo's biggest fan, but I knew with the Wii and Skyward Sword that they had some bad apples. Still holding out hope.

You're basing this on only 1 region.

So Nintendo replaced their home and mobile business, with a mobile only business, and are selling even less. Fail.

It's time to let go Alistair. Nintendo won. Switch is a massive success. Move on and be happier. Overcome yourself.