Traverse the world of Geodia as Ada, the wrench-wielding, sparklite-gathering, monster-smashing adventurer in Red Blue Games' Sparklite; a whimsical rogue-lite with charming 2D pixel art and meaningful progression. Using an arsenal of gadgets and gear to explore the world, you’ll meet and recruit a bevy of interesting people to join your town and together you'll help restore Geodia back to its former glory.

The game opens aboard your airship, which is suddenly threatened by a raging storm. Serving as a mini-tutorial of sorts, you attempt to repair and maintain the ship but, alas, it’s no use and you're forced to abandon ship. Rain pouring down and wrench in hand, you set off to find some shelter and come across a Founders’ Vault, not unsimilar looking from a shrine in Breath of The Wild. Inside, you see a pedestal holding a Spark Slinger (a crossbow of sorts). The rest of the dungeon-esque vault requires you to overcome mini-trials with the gadget to reach the exit. Before leaving, you place the tool back on the pedestal and are notified that you've learned how to reverse engineer the Spark Slinger. You can now assemble it in a workshop. 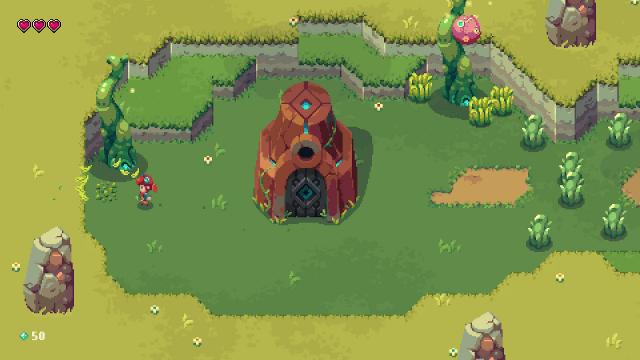 This kind of natural integration of game mechanics really puts a smile on my face. Without breaking the illusion of the game world, Sparklite introduces you to a new gadget, teaches you how to use it, and incentivizes you to go and create it. It truly sets the tone for a well-designed adventure to come, and you know you’re in for a treat.

Finding herself in the land of Geodia, Ada encounters many travelers scattered around the world, first of which is Hawkins, the widget shopkeeper (widgets are finite tools, like bombs, heals, and power-ups that aid you along the way). He tells you of the floating city known as The Refuge and asks you to help him track down his widget bag so he can set up shop there, with the added promise of supporting you of course. Once you find and return his bag, he thanks you, and even lets you keep the bag, thus enabling you to obtain and use widgets. Using the land mine widgets left in the bag, you blow up some boulders blocking your path and enter a boss dungeon in the adjacent area. The ominous structure with a skull rock formation and smoking eyes really should have been a dead giveaway. 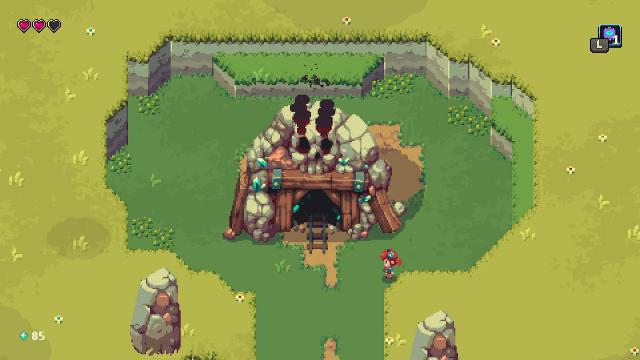 In this arena you face Boris, Tunneling Titan! He’s quite menacing looking and intimidating, especially since he’s only the second enemy you’ve seen thus far. As expected, he promptly dispatches you and you awaken in the floating city of Refuge. Having “leveraged contemporary astro-theory to achieve perfect energy lossless flight” you're welcomed to the mid-air safe-haven from the chaos below. Here you learn about The Baron and his Titan henchmen, who are stealing all the sparklite from Geodia, and it’s now up to you to stop them.

Everything in the game requires the little green gem currency known as sparklite. Building and upgrading facilities, buying and powering-up gear, recharging your weapons, and even puzzle solving, all require sparklite. Luckily, it’s everywhere. Enemies drop it and pods on trees have it. Sometimes it’s even a bulk prize at the end of a dungeon. Collect enough of the stuff and you’ll be able to advance the floating city and improve your gear after each run.

Though Sparklite is self-described as an action adventure title, it plays much like a Rogue-lite. The procedurally generated world creates an ever-changing landscape to explore and battle through. Each time you head down to the surface, things are randomized from how they were before. And, until you meet Margo and Pogo, an exploring duo who are always getting separated, the map is covered in clouds until you traverse the area. 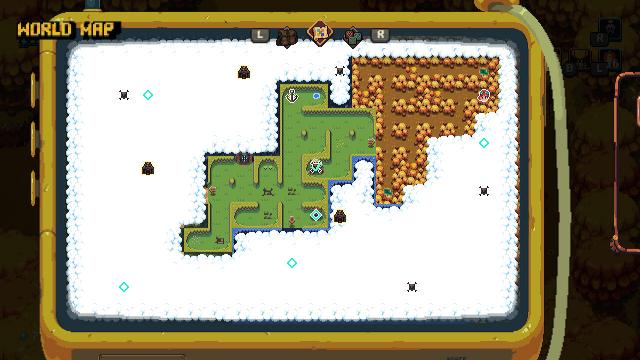 Unlike other rogue-like games where death is permanent, Sparklite handles things a little differently. Once down on the surface, there is no way back to the Refuge without dying.  When you do die, a quaint spotlight shines on you, and a claw is lowered to collect and return you back to the Refuge. You get to keep all the sparklite you’ve collected, but you do lose any widgets (power-ups) you gathered along the way. Aboard the floating city again, you may use the sparklite you collected to grow the city, improve your equipment, or save it for later use. I personally enjoyed the leisure of not losing currency or dealing with permadeath. Where similar games are challenging, I tend to stop playing them much more quickly due to frustration and lack of enough progression. Sparklite remedies both issues to present a more addictive and fun gameplay loop.

With each death you get the opportunity to better yourself and give it another go. Shops around the city require a minor initial sparklite investment to build, then progressively more each time to upgrade. I found all the gear and upgrades to be reasonably priced and well within reach. 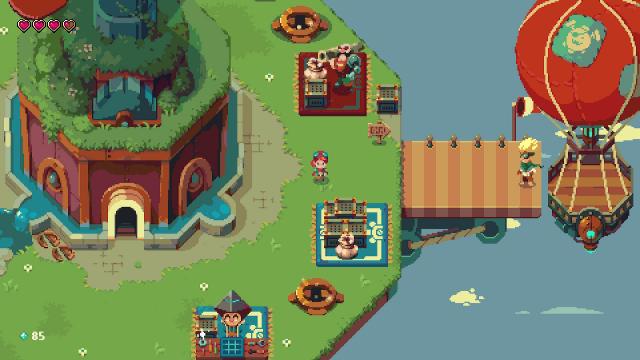 Your personal gear upgrades are made via “patches” on your “multi-tool board.” Each patch requires a set amount of space on the board. Initially, your board is comprised of a 3x3 grid. Some patches take up one square, others two. Some are vertical, while others are horizontal. This organizational mechanic adds a little flavor to the routine upgrade progress, demanding more and more consideration as the game goes on.

There are two types of patches - upgradable and non-upgradable. Examples of non-upgradable patches are things like the “Explorer’s Badge” patch, which reveals a specific area of the world map. Another is the “Vault Triangulator”, which reveals Founders’ Vault locations. The "Bronze Resilience Patch", on the other hand, is upgradable and increases your maximum health by a quarter heart. Combining two identical patches fuses them together and upgrades them into an improved "Silver Resilience Patch", increasing max health by half a heart. So you can see how four quarter heart health patches would really clog up your multi-tool board compared to a single "Gold Resilience Patch", which is worth a full heart. That’s right, there’s gold level baby! 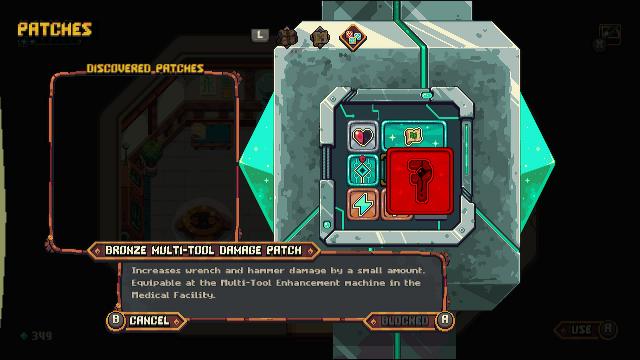 Each awakening from death starts the next gameplay loop - use what sparklite you have to upgrade your gear, build new shops or improve the existing ones, then head down to the surface for more. Each trip down yields more discovered areas and more disposable sparklite.

Your weapon in Sparklite is a multi-tool wrench/hammer combo. A single button press will perform a swipe attack with the wrench, while holding the button down will execute a considerably more powerful hammer attack at the cost of speed. Red Blue Games made an excellent choice mapping both attacks to a single button. This allows combat to flow nicely and removes any hassle that comes from switching back and forth between the two.

There is no dodge or block, so any evasive maneuvers are done with Ada's dash. It's a short burst, short range dash that's mainly utilized in traversal, and less so in combat. Most encounters boil down to simple straight-on hits, several slashes with the wrench for weaker enemies, and a charged hammer-smash for tougher ones. But don't let the simplified combat dissuade you, this game is about the mix of combat, exploration, upgrades, and adventure.

You do get plenty of gadgets as well on your journey, including the crossbow-like Spark Slinger, the Boom Balloon, a self-guided missile projectile, and more, but I really only found them useful for the puzzle solving mechanics and one-off uses. I mostly stuck with the wrench/hammer tool for all my attacks. 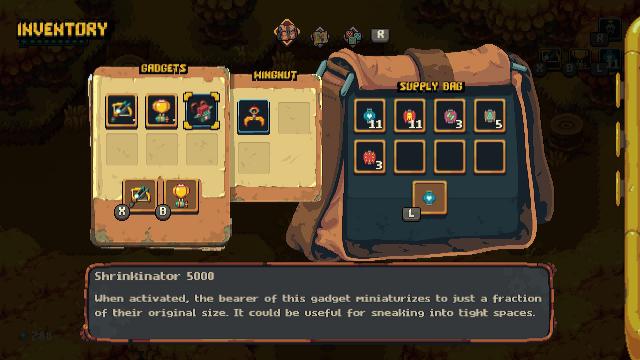 Enemies in the world of Geodia are well varied throughout, both in design and difficulty. Many times, games will recycle the same enemy and simply change the color of their shirt while bumping up their stats. There are one or two instances of that here, but largely you will be encountering completely new monsters in each of the four main sections of the game, making each new area feel distinct not only thanks to its visual change, but also because of its beast types as well. The early lush greenery of the Vinelands is filled with one-hit goo’s and push over boars. The Goldenwoods is a warm autumn-fall biome inhabited by buzzing bee-type creatures that dive bomb you and spiked ground-crawling caterpillars with specific weak points.

I never found the combat to be overly difficult. As expected, though, at first you will need to take baby steps in terms of progress. But soon you’ll be clearing entire areas with ease. Bosses are initially challenging but quickly became rather trivial, with the exception of the final boss fight, which is a multi-phase difficulty spike. If area bosses are giving you trouble, play through proceeding areas to stock up on power-ups. The time invested will help ensure victory. 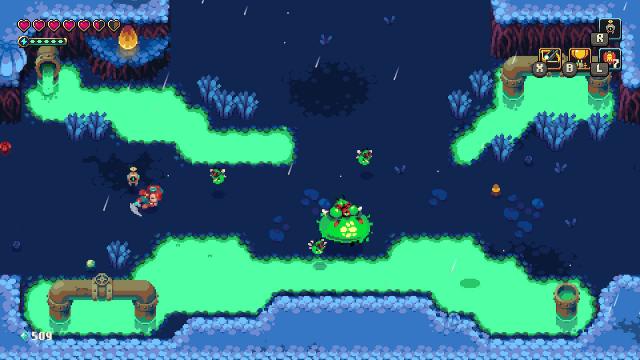 I split my time fairly equally between playing in docked and handheld mode, never really encountering any framerate issues. I did have the game crash on me once, and encountered one or two strange bugs that knocked me out of the playable area. Otherwise, Sparklite performed well and ran smoothly. Character and environmental animations really make the world feel alive and vibrant, while the music is light-hearted and cheery, with sound effects being pronounced and adding depth to the experience. My main criticism of the game is how using items requires holding the button for approximately 2 seconds to deploy, which feels too long in the heat of battle to be effective. A simple button press would've been better.

From the cog-shaped screen transitions to the endearing melodies, Sparklite is a delightfully well-crafted rogue-lite indie game inspired by classics like Zelda. The game loop never gets stale and kept me coming back for more each time. Excellent design choices throughout deliver a game world you can get lost in, and steady meaningful progression will make each outing a joyous endeavor. While I think Sparklite could have benefited from an NG+ option, the price of admission is only $24.99 and it's definitely worth every cent.

This review is based on a digital copy of Sparklite for the NS, provided by the publisher.